by scumbumbo Posted 1st Jan 2015 at 7:38 AM - Updated 15th Nov 2018 at 4:12 AM by scumbumbo : Updated 11/14/2018
February 06, 2020 - Scumbumbo has passed on but his work and memories are still being kept alive by many of those whose lives he has touched. To download fixes for his mods, please check <a href="https://scumbumbomods.com/">https://scumbumbomods.com/</a> and please direct any questions or concerns to his discord channel linked there. 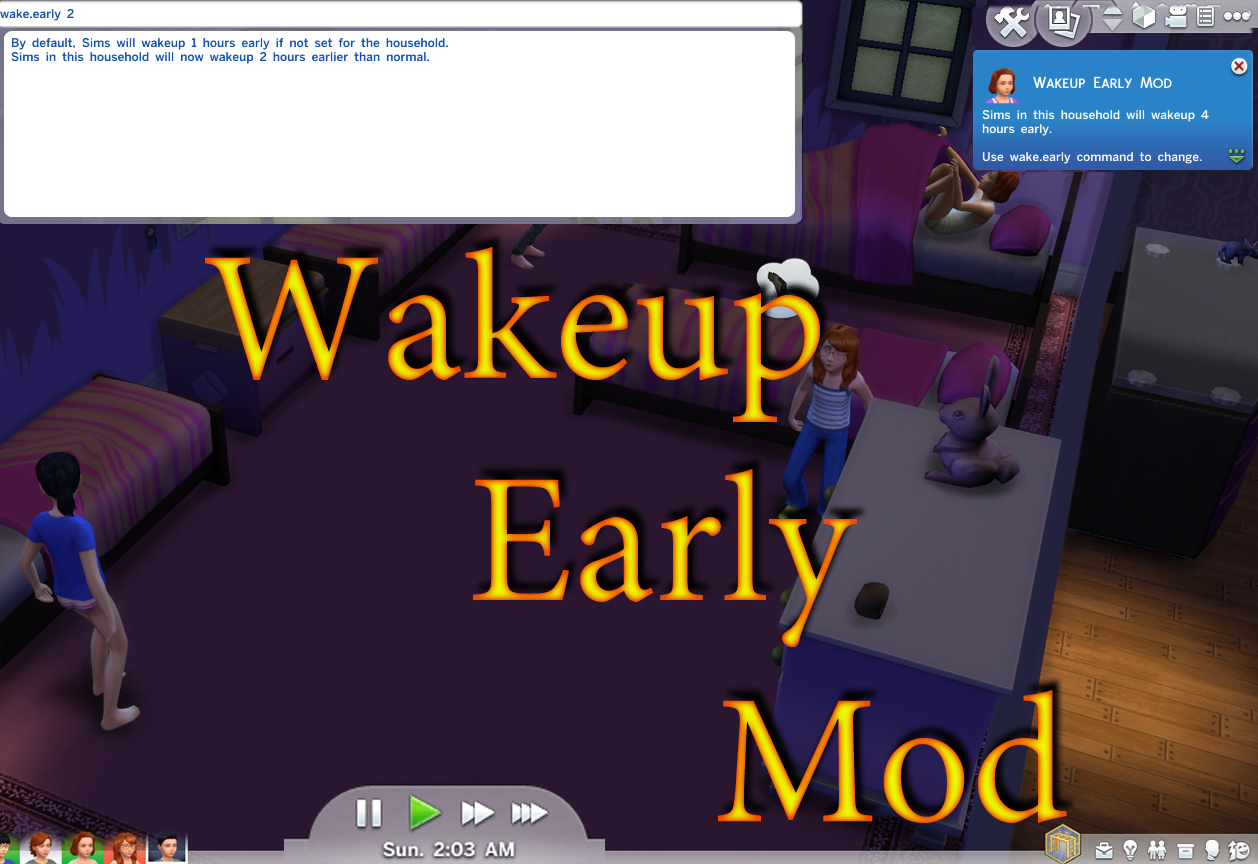 This mod adds two commands to The Sims 4 cheat console to enable you to configure how much earlier than the default your sims will wake up. This is ideal for large households where it can be difficult to manage getting all sims ready for work or school on time. It works best with ReubenHood's "Sleep All Night" mod.

Why a script mod? While it would have been easy enough to edit the tuning variables for all the careers to set sims to wake up earlier, for small families or single sims the default wakeup time of two hours before work is often adequate. For families of four or so, an extra hour is useful. For large families, two extra hours or more can be ideal. By using a script mod it is possible to fine tune the early wakeup time on a per-household basis. This method will also work with any new careers and will not interfere with any mods that alter careers.

The early wakeup time is also considered by your sims to choose when they should go to bed at night. Sims that don't have a school or work wake up time will not be affected and will wake up at the regular default of 8:00 AM.

Open the command console using the Ctrl-Shift-C keys and type one of the available commands.

wake.early # - This command lets you set the early wakeup time for the current household. The number should be between 0 (off) and 6 (maximum) and represents the number of hours earlier that you want your sims to wakeup. So to have your sims wakeup an extra hour earlier (3 hours before their work or school schedule), use the command wake.early 1

wake.default # - This command sets the default number of hours you want any household that you haven't specifically configured for another time. So you can set all famlies to wakeup one hour earlier than nomral using the command wake.default 1 The number should be between 0 (off) and 6 (maximum). You can leave the number off to get a reminder of what your default is set to.

Note that changing the early wakeup time while sims are asleep will not take effect until the next day.

Extract the MTS_Scumbumbo_Wakeup_Early.ts4script file from the download and place that file into your mods folder. If you wish it can be placed into a subfolder, but only one level deep.

This is a script mod, so scripting must be enabled in your game options.

Since this contains only new commands added to the game, it should not conflict with any other mods.

How it works: The majority of the mod deals with initialization and storing and loading the configuration values. The real work is done by overriding the get_next_wakeup_time() function of the CareerBase class. The override simply adds a few lines to calculate and return the new wakeup time. The normal value is returned if the early wakeup is turned off for that household.

If you have any questions about how something is working in the mod, feel free to drop me a personal message here on MTS.