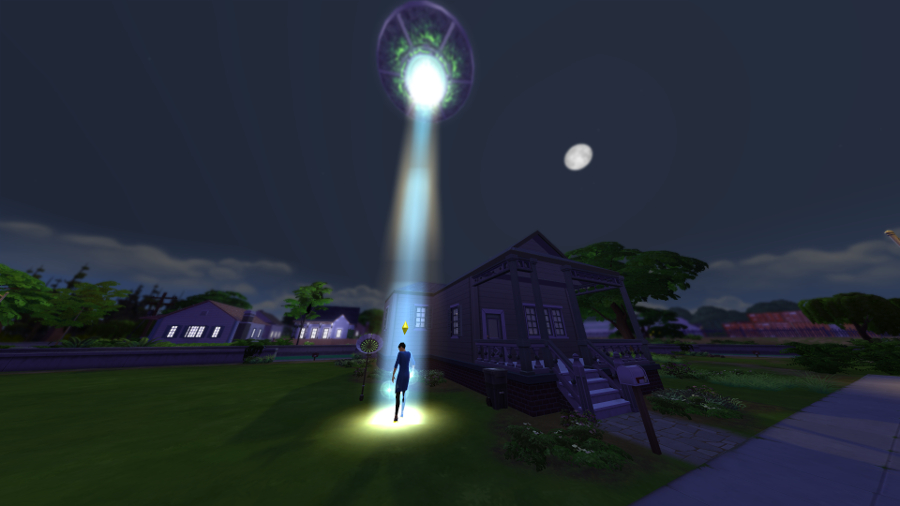 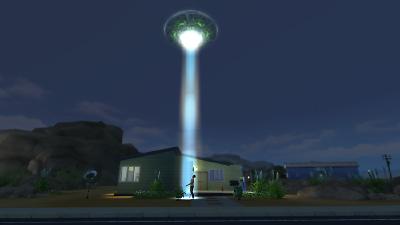 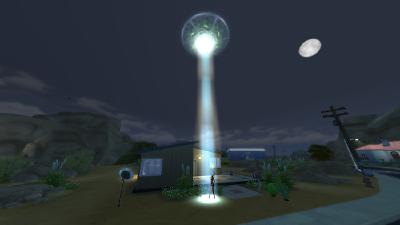 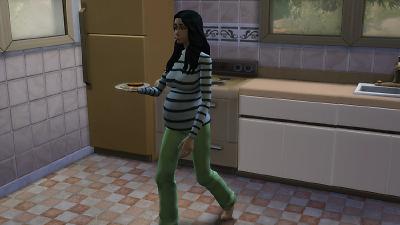 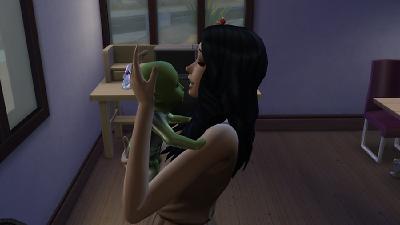 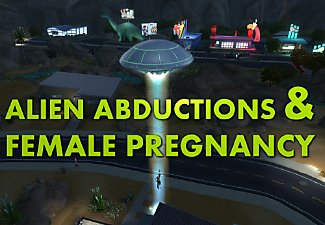 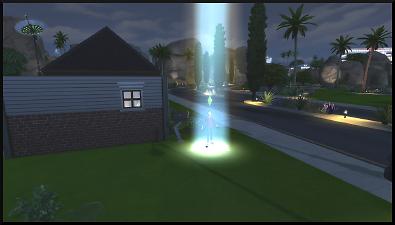 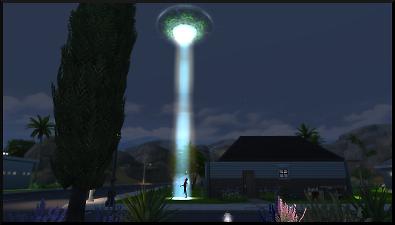 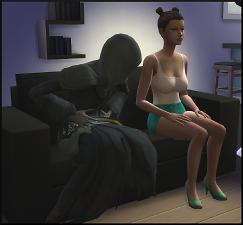 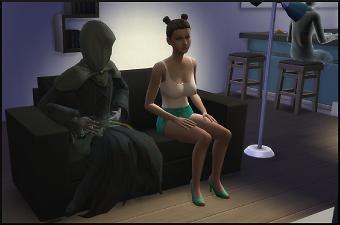 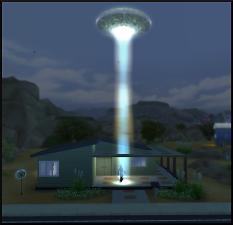 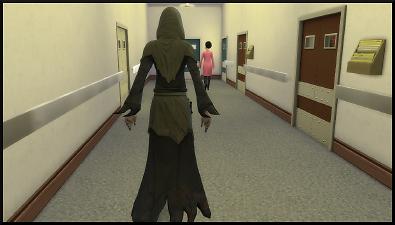 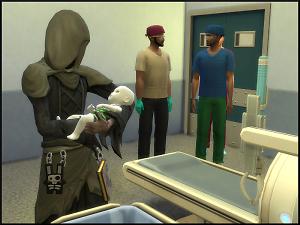 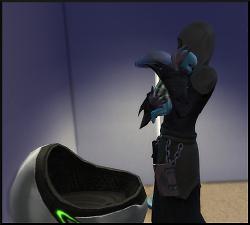 grimbaby3.jpg - width=1000 height=410
On top of that I got the Achievement to become Grims friend lol

- The mod is only compatible with the EP1 - Get To Work. Do not try to use it with the Base Game alone! You won't get aliens this way. They are simply not in the Base Game.

IMPORTANT: Before you exchange any version of the abduction mod with a new one please delete your localthumbcache.package and the various cache files in your cache folder. You can find these cache files on Windows 7 here: C:\Users\username\Documents\Electronic Arts\The Sims 4\cache
This step is important as parts of older mod versions can be stuck inside these cache files, and in order for the new version to work, these old pieces need to be cleaned!

[WARNING! Don't use more than one mod flavor! Only one package at a time will work! So choose wisely]

Spacey72659 provided an incredible proof of how well the mod works in her game! I say YEAH bring these UFOs in masses!

3 UFOs all at the same lot abducting now also TEENS!

The Satellite can be used repeatedly. (That means even if you already contacted Aliens, the function will not turn off for 24 hours. It will stay active infinitely)

WARNING: Make sure not to contact Aliens if Alien visitors are already at your home! This will force the game to create new NPC aliens and this will replace certain NPC's around the world! Remember I warned you!

* The satellite will stay active and you can contact the Aliens more than once.
* The duration for the "Contact Aliens" interaction is now set to almost forever. You do not need to contact Aliens everyday. It will stay active! If you get your Sim abducted the first time, it should not take long for any other sim in this save file to get abducted as well!
* Females can be impregnated by Alien abductions
* Males will become pregnant as well
* After contacting the Aliens you cannot use the satellite for preventing abductions.
* You can cancel the interaction when Sims go outside to investigate "weird lights". just click cancel on the interaction and then choose something else to do, after that the UFO is gone.
* Teens and Elders can be abducted as well and come back pregnant!!!
* Children can use the satellite and be abducted with the correct flavors of the mod.
* Grim Reaper can now contact Aliens on the Satellite and be abducted, he will come back pregnant!

Tutorial - Where to find the satellite?

The satellite can be invented by Scientist Sims. However there is a cheat to get the satellite faster without having your Sim work in the science career!

- Control + Shift + C
- Type: bb.showhiddenobjects
- Go to buy mode
- Satellite is in the misc electronics category (buy it)
- Place the satellite somewhere on your property
- Select "contact aliens" on the satellite menu when you are ready to be abducted. With the Main Mod installed this will be around 6:00 PM and from there on 10 hours. If you use the Extreme version the abductions can happen from 1:00 AM and then 24/7

Abduction Mod 1.5: this version contains all of the above mentioned features. You want aliens in your game and become pregnant? Use the satellite between 6:00 PM - 5:00 AM, on your home lot. You will either get a phone call and right after that a 100% guaranteed abduction, or alien visitors will come over and you will be abducted regardless.

No Abductions 1.5: This version is created for the other side of the fence. The people who complained about too many abductions can now prevent them through the satellite and it will stay forever on prevention. However the "Contact Aliens" interaction will stay active and you can use it even while the satellite is preventing. The buff for successful abductions wears off quite fast and therefore you don't need to worry that suddenly a whole invasion could happen. Just Contact them once and you will get what you wanted. An Alien baby regardless of your gender!

Flavors to use instead of the Main Abduction Mod 1.5:

Alien Abduction Mod ver. 1.5 (Only Females - Children - Extreme & Hardcore: Only females will come pregnant after abductions and Children can be abducted! So you better keep an eye on the little ones

Alien Abduction Mod ver. 1.5 (Grim Reaper - Extreme - Hardcore As the name says... this mod flavor uses the features of the Main Abduction mod, everyone can be pregnant after abductions, including Grim Reaper.

Flavors to use instead of the Main No Abductions Mod 1.5

What are the pregnancy chances?
All mods have a 80% chance of pregnancy for both genders! Except the ones that clearly state 50%. With these 50% versions you will not necessarily come back pregnant after an abduction. The new Hardcore version has a 100% base chance of pregnancy. It's not without a reason called Hardcore!

06/11/2015I have good news for you guys! The abduction mods are compatible with the new patch Version 1.8.61.1020! I do not need to update them. I checked all the files and there was nothing different. I tested the 1.5 version of my extreme mod in the game in Newcrest with a new female Sim. I clicked on Contact Aliens and she got a phone call, then I clicked on the satellite and the option was still available so I did it again and she got abducted, standing there on an empty lawn

So if this version works, all the other ones should work as well.
06/05/2015 I've uploaded a fix for the CHILDREN flavors of this mod on June 5th... As it did not come to my awareness that Children apparently were getting pregnant after abduction... It seems the abduction pregnancy files bypass the laws of the game which makes it easy to get teens pregnant... So please disregard the old version and download the new ones instead. Children now should only be abducted but do not come back pregnant...
06/04/2015 I've uploaded 3 new mod flavors on the 4th of June. I read a funny post on The Sims forums. A user asked for Grim Reaper Alien babies and so I came to the conclusion if there is anything still missing for this mod, then it is indeed having Grim Reaper being abducted and becoming pregnant! And so I created the 3 new flavors.
I also re-arranged the rar archives and added them all in nice packages.
06/04/2015 I've uploaded 3 new mod flavors on the 4th of June. As requested I created the 3 main mods for Only females and children. This means only females will come back pregnant after abduction, males won't get pregnant anymore. Children can be abducted!
06/02/2015 I've uploaded a few new mod flavors on the 2nd of June. This time You get 2 completely new flavors to choose from. Whoever watched the movie Close Encounters of the third kind, knows that children can be abducted! So I created a flavor of all the main mods that does exactly that! Children can now use the satellite to contact aliens and be abducted as a result. The second flavor I created reverses the changes to females and allows ONLY males to come back pregnant from abductions. If you are a fan of male pregnancy only, these versions may be for you!
05/20/2015 Important update! It came to my awareness that the abduction mod created Last Exception files. I finally could find the culprit... It was a < too much in the code... So I updated all the mod versions.
05/20/2015: I've uploaded a new Hardcore version for Females only!
05/19/2015: I deleted the 1.2 versions as these are by now old, and I am pretty sure anybody who had the first May patch would update his/her game anyway to the new version, so there is no reason for the old versions to stay.
05/17/2015: Version 1.4 of the updated mod is now also available for Females Only. These mods only allow females to become pregnant after abductions!
05/16/2015: Finally I could fix the problem. The mod is now fully compatible and working with game version 1.7.62.1020 + newest update from 05/15. The female versions are still missing, but it took a whole day to fix this mod, so forgive me if I am too tired now to re-create these packages. I will upload them tomorrow!
05/14/2015: I've uploaded updated versions for the newest patch version: 1.7.62.1020. The old versions can still be downloaded, I've added the flavors all in one package, please make sure to always only use one of them! Either one of the main mods or a flavor instead of a main mod.
05/11/2015: I've uploaded two new extreme flavors of the Abduction Mod 1.2. You can use one of them instead of the main mod. For more information about these flavors, please read the mod descriptions.
05/09/2015: I've uploaded another flavor of the female only version of the abduction mod. This time it's only a 50% chance for females to become pregnant. Males won't come back pregnant!
05/09/2015: I've uploaded of all mods new versions (fixes) as EA messed up the beginning music for abductions and an icon got missing which showed before the May patch the Sims head in the interaction queue, where now is a flying lama. I fixed these two mistakes. So please re-download the new mods with the end FIX on them!
- Uploaded a new flavor that can be used instead of the main mod 1.2. This flavor allows only females to come back pregnant after abductions. Males will be abducted, but they won't come back pregnant.

Conflicts with every mod that tries to change the aliens abduction system or the satellite itself!

Additional Credits:
thanks to:

And special thanks to all the people who tested the mod through it's beginning stage!

A special thank you credit goes also to:

ClaudiaSharon - She created a No abduction mod that prevents the random abductions from the very beginning. My plan was to create an abduction mod that does the opposite. So I checked the files for her mod. (Thank you very much for this Claudia! I appreciate that you let me look over the files myself!

I reversed the values that she changed and tested this mod for a while and did not see any differences, no random abductions ever happened.

I nearly gave up but then told myself wait a second, you don't give up so easily... So I disregarded her mod and checked ALL abduction files from my extracted tuning files again. I changed a lot around and I am using the satellite for immediate abductions and prevention. However, my No abductions mod does not start from the beginning. First when you click on the satellite interaction "Prevent abductions" the buff stays forever and does not go down. BUT I thought about the people who would try it at some point and instead of changing the mods all the time, I added the feature that even while the satellite prevented abductions from happening, that people can click on "Contact Aliens" and this will cause a direct abduction. The satellite however stays on prevention forever! That being said, Claudia's and my mod are very different! And I encourage her to upload her version as well. As some people may not want to use the satellite for prevention.
Other Information