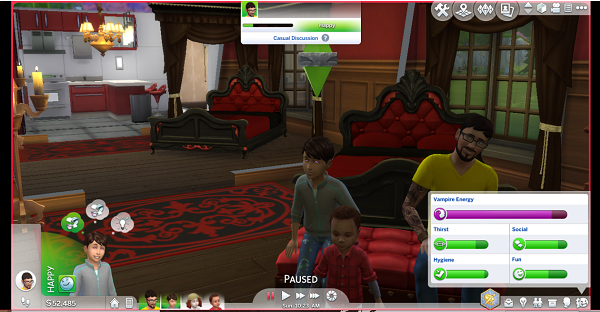 Created by Dipper View Policy / About Me View all Downloads

Notice June 19th, 2022: I'm expanding! Version 0.6 is my reskin of the original mod, updated for the Werewolves patch. But it still only affects vampires... there are little mermaids/mermen, spellcasters and werewolves just crying and howling out to be free too! Over the next few months, I'll release first spellcasters (0.7), then merfolk (0.8), and finally the werewolves (0.9).

Notice June 25th, 2022: Version 0.7 is released! Note that there are now THREE versions of the mod to download; one that impacts only vampire kiddos, one for spellcaster kiddos, and one that works on both. The spellcaster kids seem to be doing fine, but as always, if anyone runs into issues of any kind, please leave me a comment and let me know so that I can fix it.

If anyone is interested in beta testing, toss me an email (dipper at deadlypuppy dot com).

Are you tired of little vampires who don't feel like little vampires? Sim kids constantly whining at you that they're old enough for Hogwarts, but still can't wave a wand? Toss on this mod and let those little rascals embrace their inner specialness!

You can reach me on Discord at Dipper#6657 if you have questions or comments. I'm also reachable at dipperjc on Origin and by email (dipper at deadlypuppy dot com), where I'd love to see screenshots of the mod in action or hear how you're using it!

For the grouping area:


This mod is divided into multiple segments, each of which accomplishes the following:

Version 0.7 (Late June 2022)
Updated the mod to include spellcaster children; released multiple versions of the mod to account for partial preferences.

Version 0.6 (June 2022)
Rebranded as "Super Rascals" to move towards including other special occult types. Updated code to be compatible with Werewolves Game Pack.

CVM Version 1.9 (April 2019)
Redid the module from scratch, using the old one as a template, and modernized it for all patches up to and including Island Living.

CVM Version 0.9.5.1
Segmented the mod into component parts to help deal with possible compatibility problems that other mods have.

Repaired some compatibility issues with the new Cats and Dogs patch. Dark Meditation still broken due to patch.

Fixed a bug that was preventing human children from being turned.

So it turns out that manually aging up vampires didn't work the way I thought it did. So I tweaked it to get the experience I was looking for:

The practical effects of this are that if you play without autoaging, you can now manually age up your vampire whenever you want. If you play WITH autoaging, you have to make a concentrated effort to age up your sim - he or she has to quit sim drinking cold turkey and go with plasma packs and plasma fruit for the entire duration of their current age category.

If you're into roleplaying, you could call this a ritual fast in order to attain some kind of elevated status.

Note: you only need to download one package! Pay attention to which occult children are modified by what package.