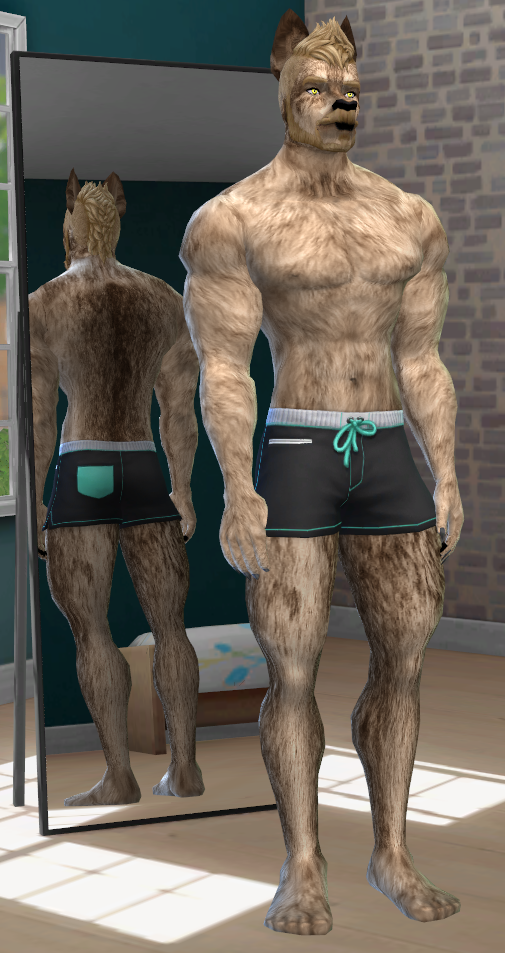 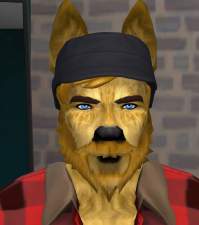 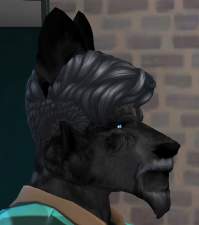 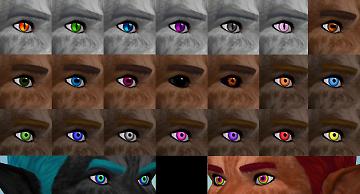 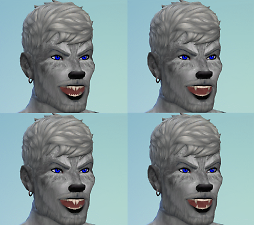 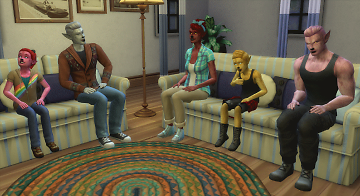 Update:
A small update to the skin blending, and change to the order they are in.
Before the change, the new replacements didn't match up quite right and the overall display index was off.

Touched up the textures of the 16 skins a bit, and replaced 2 skins(Greying Brown and Greying Black) with skins that match 2 of the latest EA hair colors(Dirty Blonde and Platinum Blonde).
And, this new version allows the skins to be used on Spellcasters(I took a long time to implement this).

I also changed a few of the eye textures, the 9 colorful "human-looking" eyes have a bit more detail.

Furthermore, how to distinguish them in CAS catalogue:

-the Nose is at the top of the nose list (the squished looking nose)
-Ears look normal in the icon (just click on all the ear presets until the wolf ones are picked)
-the beard looks just like the one in the preview images above.
-Body Preset has more rounded shoulders in it's icon.

Sorry about the difficulty in finding these CAS presets.


Since the ears and snout are morphed to look the way they do, expect clipping and weird interactions with some accessories and hairstyles.
____

There are Three Versions of this Mod(ONLY download ONE):

The NEW Redone package allows Vampires, Spellcasters, and Humans in CAS to use the Skins.

The Vampire_&_Human package allows both Vampires and Humans in CAS to use the Skins.

The No_Blending package allows both Vamps and Humans to use the skins.
However, the skins will not blend into each other.

All versions allow you to choose in CAS which Sims have the Werewolf Skins.

Additionally, there are two OPTIONAL files for download.
23 eye colors that work genetically, and a file that lets Human sims use the Vampire Fangs!

All 18 skins share the same texture, they are recolors.
And, the colors are made to resemble the 18 EA Sim Hair Colors!

How they generate in the game, and genetics

They are not randomized, so you do not need to fear about Pink Werewolves wandering the streets.

Unless, you decide to create a family of Pink Werewolves.

ALL can potentially blend into each other.

However, two parents with Natural hair colors will NOT make a child with Unnatural Hair, and vice versa.
BUT, a couple with Red and White Hair can have children with, Blonde, Red, and Pink hair!
(Photos of the Werewolf family above are an example of this)

This mod does Not override any of the existing Skins,
it only adds the 18 Werewolf skins for Sims.

Additionally, you can pick which skins you want to show up in the game.
Say, you don't want Blue and Pink Werewolves walking around.

Taking these two skins out is as easy as deleting their respective Package files,
and the mod WILL still work perfectly without them! :P

The plant sim bug should be fixed.

I made this mod with CmarNYC's TS4Skininator, a program you can create default replacements of skin in the game,
or, make completely new skins if you desire. This package files, and genetics would not exist without it!
http://www.modthesims.info/download.php?t=568474

I highly recommend this resource to creators that want to make CC skintones in the game.