For The Horde Career Path 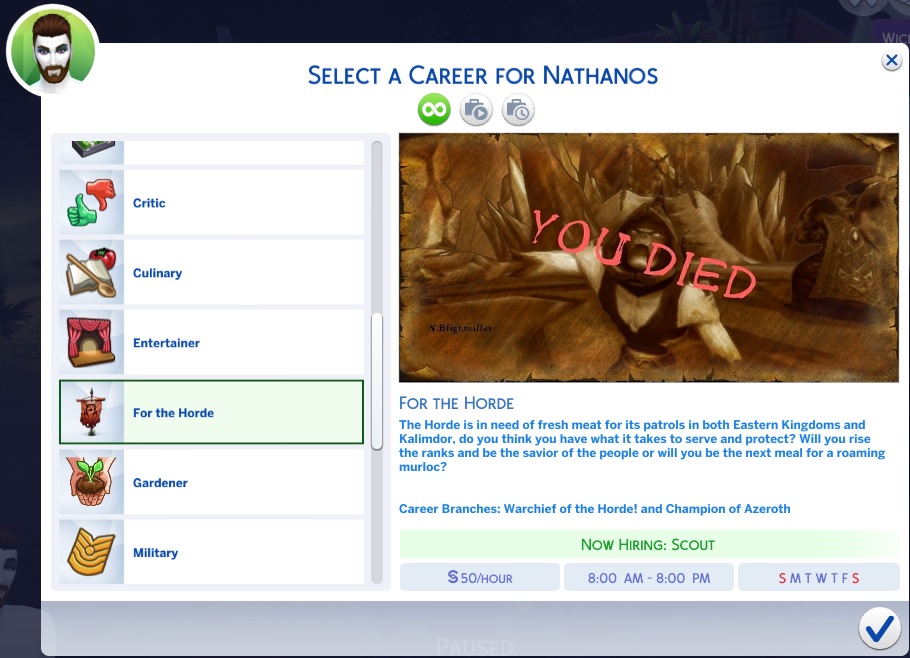 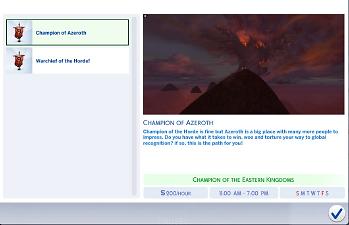 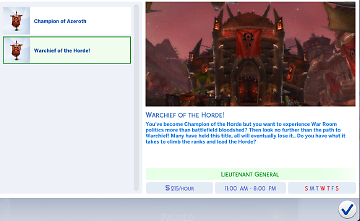 9,815 Downloads 68 Thanks  Thanks 24 Favourited 20,496 Views
Created by N.Blightcaller
View all Downloads
Uploaded: 25th Apr 2019 at 3:08 PM
Updated: 31st May 2019 at 1:18 PM
As this started out as a personal career option for my main World of Warcraft Sims (Nathanos + Sylvanas) the pay isn't fantastic as the main idea was more of an RP vibe than a means of income with RP objectives to suit the current level and to get the promotion to the next rank
Example - Scout needs Fitness 1 (to stay on the move), Painting 1 (to map out camps), Cooking 3 (to stay healthy on the mission), Logic 2 (to decide the safest path), Charisma 1 (to charm locals)

Note: The Base Game .zip version has a slight variant on the Warchief Ranks descriptions and objectives required to level up. If you have Get To Work, Get Together, Outdoor Retreat + Spa Day i would recommend you download the 2nd .zip as it has a slightly more RP vibe in the text than the Base Game version.

For The Horde Career has 9 Ranks:
"The Horde is in need of fresh meat for its patrols in both Eastern Kingdoms and Kalimdor, do you think you have what it takes to serve and protect? Will you rise the ranks and be the savior of the people or will you be the next meal for a roaming murloc?"

"Be careful out there."
It's up to you to travel the land, searching and marking out where enemy camps are but don't engage... We need to know where they are and we can't do that if we don't know where you are!

"Do not seek death,"
So you've scouted all over the land and now you want to get your axe dirty? You are either brave or foolish.. only time will tell which it is. You need to start by fetching lumber and raptor pelts before you even consider anything else.

"Master yourself."
So you've been dumb enough to last thing long, eh grunt?
Able to follow orders enough that you think you can give them?
Lets see what you're made off, but try not to get the recruits killed in training..

"Do it again and your skull will be my whetstone."
So Thrall says you are the best thing since slice Talbuk. You've done well to climb the ranks so quickly, but make no mistake, you are still just a grunt in the glory of the Horde.

"Do you feel the change in the wind?"
You've done it! You have finally earned the right to stand around doing nothing and getting paid for it! You have earned the chance to stand guard over our camps and capitals.

"We are the defenders of Suramar."
Ready to work for long hours with even less thanks than a Grunt? The Blood Guard are the protectors of the leaders, the guards of guards. Stay vigilant and stay out of sight. Your skills have got you this far but your stupidity will be your downfall.

"Blood and thunder!"
You have proven your worth time and time again, you are now promoted to the rank of Legionnaire, the elite soldiers of the horde. Your skills, dedication and prowess got you here but make no mistake, you are still just an overworked underpaid Grunt for the Horde!

"Go forth to victory."
The leader of the Legionnaires. You will lead your own army into battle against the Alliance forces, the Murloc swarms or just take back the Barrens from the Quilboar!

"Remember, patience... discipline,"
Champion of the Horde comes with many perks, neither of which is fame or fortune, but you can pride yourself in knowing that you got here through hard work, lots of blood, sweat and tears (not all yours either) and by being a true servant of the Horde!

By Reaching Champion Rank you unlock two branches (as shown in the images)
Warchief and Champion of Azeroth. The Warchief rank is a lot shorter to finish and has longer days but they both end with the same salary per day so the choice is yours! Each Rank of Champion has a little description relating to the corresponding expansion of the games title as well.


Warchief Ranks:
"You've become Champion of the Horde but you want to experience War Room politics more than battlefield bloodshed? Then look no further than the path to Warchief! Many have held this title, all will eventually lose it.. Do you have what it takes to climb the ranks and lead the Horde?

Champion, you have fought well in your career but enough blood has been spilled, its time to focus on leading the armies as Lieutenant General from the safety of your own tent and not on the front line!

General of the Horde armies. Strategy, Logic, Charisma and fitness a plenty, you are the poster child of what it means to be part of the Horde! Sit back in your Garrison and enjoy getting credit for the work everyone else puts in.

Warlord of your own region, you exercise military, economic, and political control but at what cost? are you For the Horde or For Yourself? You now have time to study anything you want...

High Warlord of the Horde, you answer to nobody but the Warchief, and even then... only when you need something to keep your foothold safe and secure! You have fought, brought and assassinated your way to the top, regions fear you and nations follow you...

All for the good of the Horde of course.

High Warlord was never going to be enough for you. You have been the closest ally to the past few warchiefs, watching them all fail your view of the glorious Horde. The current Warchief has fallen ill and asks you to step in on their behalf to lead the Horde. Was it the Old Gods or was it something a bit more close to home? Either way, Congratulations, Warchief! Your path has finally come to an end. Reign in terror or reign supreme, the choice is yours!


Champion of Azeroth Ranks:
"Champion of the Horde is fine but Azeroth is a big place with many more people to impress. Do you have what it takes to win, woo and torture your way to global recognition? if so, this is the path for you!"

With Sylvanas residing in the Undercity and the Forsaken slowly branching out, it is up to you to fight and make your name known from the Sunwell to Strangelthorn. Aid the Dark Queen in any way you can as you make the continent your own.

With the land still recovering from Deathwing and his Cataclysm, Kalimdor is in turmoil. Do you have what it takes to traverse the land and aid our Orcs, Trolls, Goblins and Tauren brethren as we claim back our old land and forge new paths through the destruction?

The Dark Portal is still open and Outland is still there. Go forth Champion and deal with the broken world that once was home to so many and cleanse out the corruption that lingers within..

You are slowly gaining footholds and recognition but there is a storm brewing in the frozen land of Northrend. You need to go assist the Argent Crusade and the Knights of the Ebon Blade as you take down Arthas once and for all and gain another land for the glory of the Horde!

The world is at your feet Champion, but do you have what it takes to keep pressing on? A new land has just appeared from the mist, an island continent full of new wonders and challenges for you to face, a new Warchief to follow, but what will it be? Victory or Death!?

Garrosh the fool. Power mad and screeching about the one true Horde has gone back in time to the original Outland and made a whole new mess for you to clean up. You've seen "the After" to the land the Legion has destroyed, now see "the Before"... Oh and he's only gone and let them in the front door to Azeroth!
Janitor of the Horde should be your new title, Champion, as the mess just keeps on coming!

Garrosh has been dealt with but still you have work to do!
Gul'dan and his demon horde has invaded Azeroth. Take to the broken shore and curb his invasion with the help of some unexpected allies, some incredible weapons and a never ending supply of stress to keep you up at night!

Bon Voyage! Do you have what it takes to not only deal with Jaina and Anduin but also to sort out politics, fight dinosaurs and help furry little fox people? The pay has been increased and the hours are still as awful as ever but new lands equal new experiences and nobody can put a price on that!

Champion of champions! You have climbed the ranks from a lowly grunt to the world famous Champion of Azeroth! You have faced wonders beyond description, traveled through time and to alien planets! You have made new friends from old enemies and new enemies from old friends!
The world is yours, now go forth and defend!

Fancy going on the blue team? Then the Alliance career path is for you!

Just download and unzip the version you want and drag all 3 files into your mod folder and away you go (the zips include Neia's Career Package, so if you download this and my Alliance Career, you only need one version of the Neia_Careers_Commons.Package so it is safe to delete the duplicate!)

For more Warcraft content just click Here! to see what is on available. Do check back as more stuff is slowly added! Any recommendations are welcome as well!