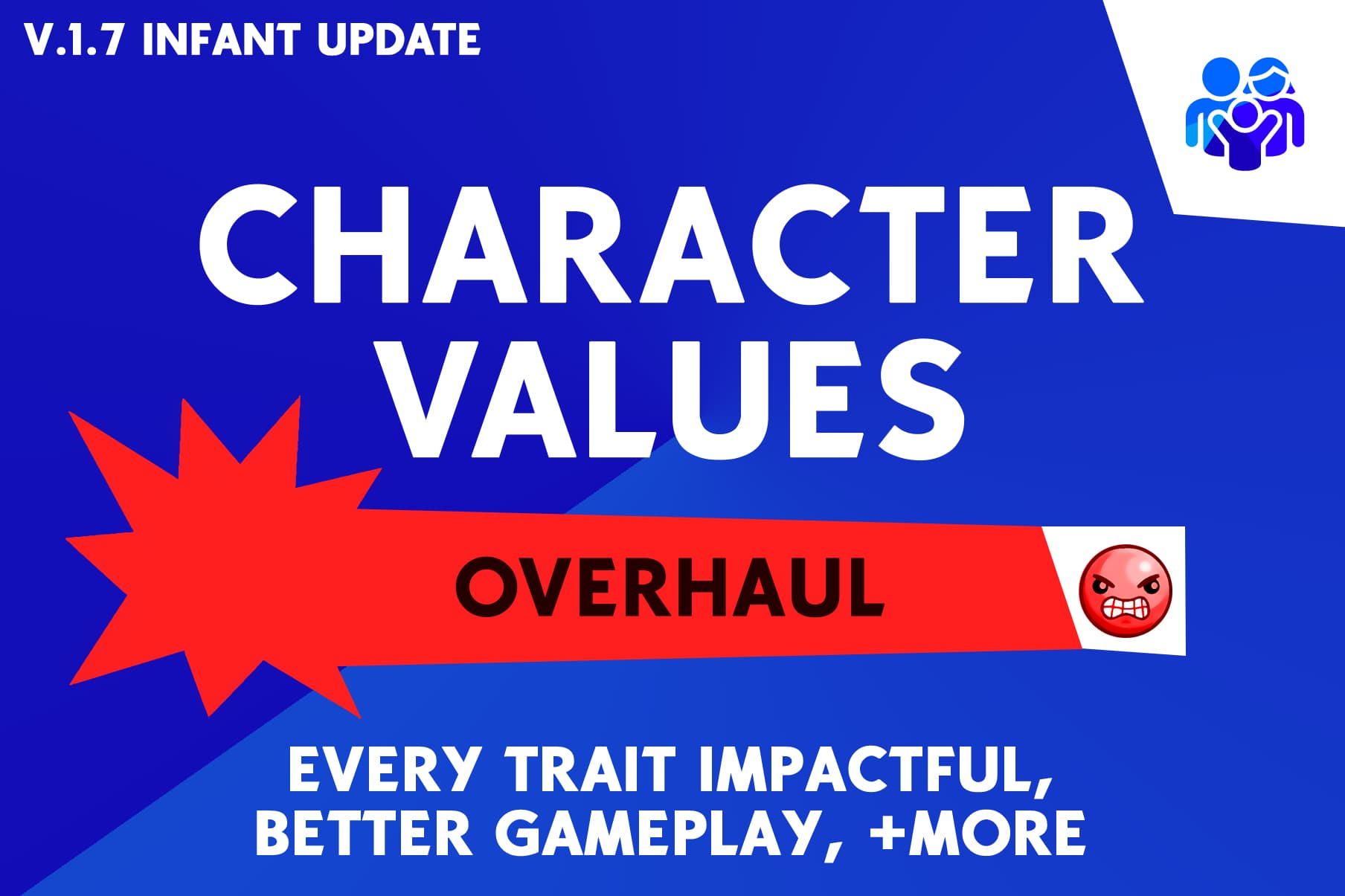 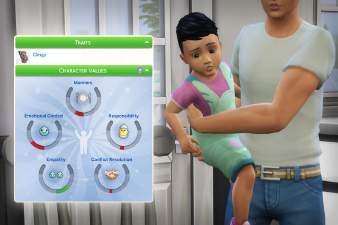 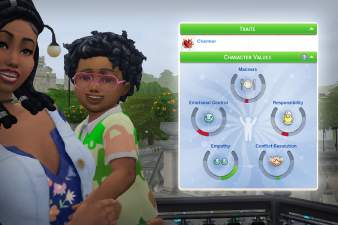 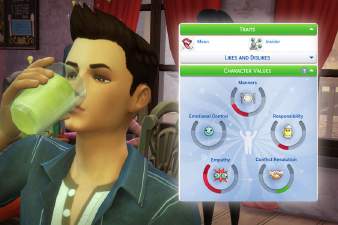 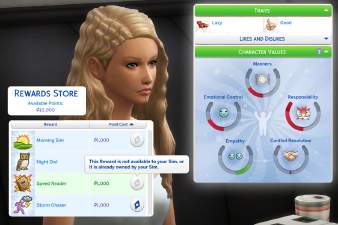 Created by tyjokr View Policy / About Me View all Downloads

No update needed for patch 1.85.203
The Character Value (CV) system introduced in Parenthood is underdeveloped and hasn’t been updated in years. Currently, only 12 traits out of the 50+ traits available to Sims have an impact on CVs. Also, if a child ages up with a worrisome trait like “Evil,” their existing CVs will remain largely unchanged. This mod corrects that and goes several steps further.

In addition to the above, I've weighted the values of every trait to both balance out the different CVs and (hopefully) add a bit more challenge to raising children. For instance, since Responsibility is generally considered the easiest Character Value to raise, traits that positively impact it are weighted low to account for that. Similarly, traits that negatively impact Conflict Resolution are weighted low as it is generally considered to be the hardest Character Value to raise.

Basically, everything is appropriately balanced.


The CV system also dictates autonomy somewhat. For example, if a child Sim has high enough Manners, they'll start setting the table. I've lowered the amount of points a Sim needs in order for these different levels of autonomy to kick in. So you should see your Sims behaving in better accordance with their Character Values.

In the vanilla game, Sims born or created in CAS start out with a random value in each CV anywhere from -5 to 5. In my opinion, this isn't really that dynamic of a range. I've increased the range to be from -30 to 30 for most CVs.

Whims, autonomy, and integration with other mods

Sims who have at least -20 in a character value will be passed a hidden "Developing" trait that mirrors the negative Parenthood Traits. For example, a Teen Sim with -35 in Manners will behave and roll whims as if they had the "Bad Manners" trait. If that same Sim consistently works on developing their Empathy (at least 20 points in the positive direction), the hidden trait will be removed and they will then behave as normal.

In an attempt to flesh out the impact of Character Values a bit more, I've added more Whims for Irresponsible and Insensitive sims. For those who use Bienchen's sims4me_whimoverhaul, my mod is fully compatible with it. I highly recommend that mod as it adds more Whims for Responsible, Mediator, Good Manners, Bad Manners, Argumentative, and Compassionate. Download here.

Public Woohoo (Will only show up if you have MissyHissy's Custom Whims . It is not required to use my mod.)

Go Streaking (Will only show up if you have MissyHissy's Custom Whims . It is not required to use my mod.)

Throw A Party (Will only show up if you have MissyHissy's Custom Whims. It is not required to use my mod.)

Do *** (Will only show up if you have certain Basemental mods. It is NOT required to use my mod.)

Do *** At Club (Will only show up if you have certain Basemental mods. It is NOT required to use my mod.)
Ignore Bills

I will look to add more in the future.

Want consequences for your game? With this add on, Young Adult, Adult, and Elder Sims that have aged up with a negative Parenthood Trait will be restricted from purchasing certain reward traits. Toddler, Child, and Teen Sims with -20 points in any Character Value will also be restricted from these reward traits. Only if you manage to raise a Toddler, Child, and Teen Sim's Character Values to +20 will they be able to purchase the traits again.

The blocked rewards are as follows:

Insensitive
Observant
Independent
Needs No One

Character Values are now impacted by all Traits

Toddler Traits are weighted differently from other Traits as they serve as the basis of a Sim's Character Values. As such, they are capped so that the maximum amount of points they can grant in either direction of a Character Value is 45. That combined with the random starting value means that there is a slight chance Toddler's will be in range of earning a negative Parenthood Trait when they age up from a baby and/or are created in CAS. Parents, get to work!

This mod is NOT compatible with my Lower Threshold for Parenthood Traits mod. This mod is intended to replace that one.

This mod is not compatible with Zero_PH_Parenthood_Fixes. I've incorporated Zero's fix into this mod.

Despite the emphasis on traits in this mod, no trait files have been modified. The main files this mod modifies are the lifeSkillStatisitc XMLs and the LifeSkills_Autonomy buff XMLs. I've yet to encounter another mod that touches these. I've also taken care to make sure that the Whims and Whim Sets my mod touches does not conflict with anything Bienchen's "sims4me_whimoverhaul" touches.

My mod is compatible with mods that increase or decrease the rate at which you gain/lose Character Value points. This includes the difficulty adjustment setting found in MCCC.

For an added challenge, you can use my mod with Kuttoe's "mini mod: parenthood hard mode". But, be warned. You'll be seeing a lot of red!

The BlockRewardsAddOn doesn't touch the actual Trait XMLs of the reward traits. It only modifies the Reward Tuning XMLs. So it should also be compatible with any mods that edit the Reward Traits directly.

Some features of this mod require XML Injector

My mod will work fine without it, but if you want ALL the features of this mod, you just need to make sure that you have "XmlInjector_Script_v4.ts4script" in your mods folder. If you already have it, you're golden. If you don't, you can download it here.

If you're hesitant to download XML Injector, you can learn more about it here.

Made with Sims 4 Studio
German translation by granatapfelsaft
Other Information

Argumentative Sims don't always start conversations on the right foot with Sims they don't like. Successfully apologizing is harder and they do try to assert their correctness more often than not.
Ages:

Sims with Bad Manners can try to be Friendly, but will always fail using certain socials. They will often use gross manners, swear a lot, and never want to do the dishes.
Ages:

Irresponsible Sims are uncomfortable at work, but ignoring bills and slacking off brings them joy. They may also encounter new situations when at work.
Ages: