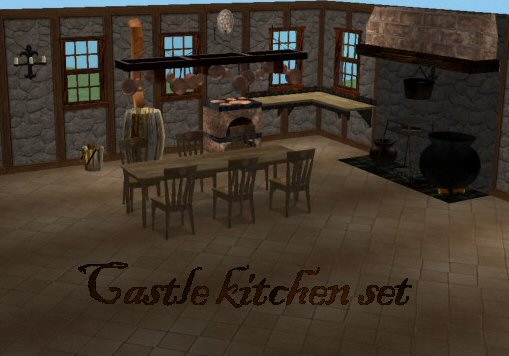 36,518 Downloads 2,572 Thanks  Thanks 119 Favourited 186,465 Views
Picked Upload!   This is a picked upload! It showcases some of the best talent and creativity available on MTS and in the community.

hello,
here's a predictably medieval themed kitchen set for ya
The hearth is based on photo's of a reconstructed medieval kitchen, and then simplified

The oven to me kinda looks like an italian pizza oven, but maybe that's just me

Based on what I think is a woodcut. Don't know if it's authentic though.
My thanks goes to besen, who again has taken the time to translate all my silly texts to german.

ok, I've got way too much to say, so bear with me and read everything carefully before downloading.
All of the following was made with varying combinations of Blender3d, SimPE 0.4, UVMapper, and Paint shop.
They should work with both versions of the game, unless stated otherwise.
All meshes come with catalog entries for Dutch, German and French. Everyone else gets English.


Legals:
The meshes: Feel free to recolour, hack, fiddle with these and post your work. Just give a link to the original mesh here and tell me all about it. Please don't post the actual mesh anywhere without asking me first.
The recolours: I have no idea why anyone would want to steal these :err: Just don't.

Please don't put any of the above in a downloadable lot. We don't want to scare unsuspecting players.

The hearth (barbeque)
Price: 750
Poly count: 1773
The game thinks this is a one-tile object. That means you can put stuff under the 'hood', like I did with the cauldron in the screenshot. The little cauldron is part of the mesh.
Known issue: Spontaneous combustion. Some people commented on this. After testing again I think I figured out what caused it. It seems that maxis made all barbeques catch fire if they are used indoors. Since the hearth is cloned from what is essentially an outdoor bbq, it's not healthy to use it indoors. I'll see if I can hack it, or find someone to hack it for me. Untill then, keep the hearth outside or keep an extinguisher near

The dining set are recolours of the Contempto Penn Station side chair and the Myne Cafeteria Table (uni needed for this)
I added a matching counter, recoloured from the Locker room counter (uni again)
And because it looks so good, there's also a recolour of JWoods Panrack. You'll need the mesh for that, get it here:http://forums.modthesims2.com/showthread.php?t=70717
That's four very different things in one package. The package names should tell you which is which, if you want to chuck some out.


The waterbutt
Price: 460
Poly's: 516
This one again suffers from Invisible Taps Syndrome *sigh*

Also in the package: a recolour for the waterbutt and a matching waste bucket in a darker wood.

I went a bit mad with the recolouring bit, so next to the default black stone one, you get: Red, Durango, Orange, Pink, Olive, White, Green and Ostrich, all in pretty stone textures (see screenshot)


Right, enjoy
and feel free to comment or criticize.

Hi there,
since I'm officially sorta retired as a modder, feel free to derive from my work to make new stuff!
You may use textures and meshes (a link or credit is appreciated) for movies, redo's, new creations, whatever.
You can also upload my meshes on other sites with your new creation, if you want. Again, a link to MTS is always appreciated, and a general cool thing to do.