How to safely move all characters to a new neighborhood
Picture this: you've just downloaded a cool new uninhabited neighborhood. At the same time, you'd really wish to keep playing your legacy neighborhood with over 150+ dead Sims, a good storyline developed, and all the drama going on. Then, you think of an idea - wouldn't it be great if those legacy Sims were to live in the newly downloaded neighborhood, but without the hassle of having to recreate them all one by one in CAS, move them in, kill 150+ of them, etc.?

In the end, this won't be a fresh start for a neighborhood, but instead, you'll be giving your neighborhood a complete makeover (from a template).

WARNING! This method only works with neighborhoods with absolutely no subhoods (and this includes stealth subhoods!). I haven't tested it with neighborhoods with subhoods, but I assume that in such case you'd have to pay very close attention to what lot strings, descriptions and packages you're moving over. I strongly suggest you refrain from following this tutorial if you're working with a subhooded neighborhood.

Before we start, here's a general overview of names I'll use in this tutorial:Of course, your neighborhood IDs may differ from mine. 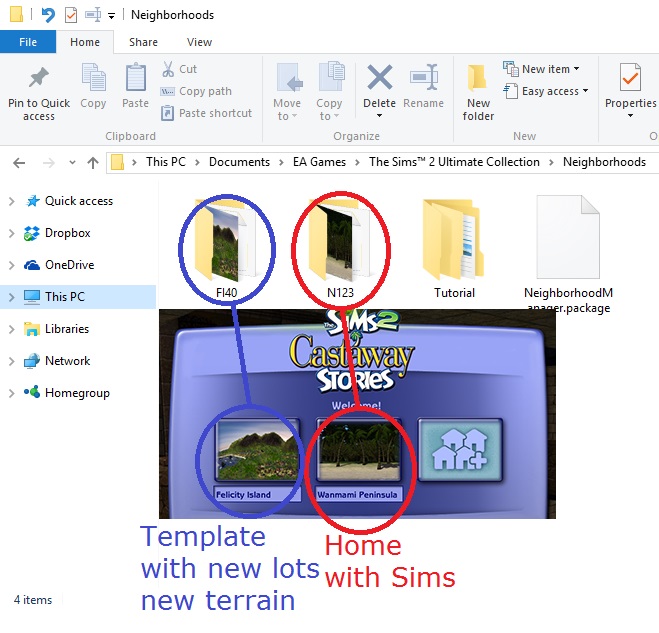 Before you start playing, I'd advise you to first move in all families that contain Sims that carry graves in their inventory. Place all graves in world, and either keep them on that lot, or send them to a community cemetery by clicking on a grave and selecting "Move All Graves." It's not advised to keep graves in a Sim's inventory for a long time, as the Sim might accidentally die. Corruption arises when a Sim dies while carrying graves in their inventory.

Additional Credits:
This tutorial is actually a reverse process of Mootilda's tutorial on removing all Sims from a neighborhood (in a way of transferring lots and terrain to an uninhabited new neighborhood). Without her work, I definitely wouldn't be able to figure this by myself.
DJ. who?
Essential mods, cheats, tips & tricks for The Sims: Castaway Stories || Felicity Island for TS2
idemo autom!
Advertisement
Jawusa

I haven't tried it, but I believe bulldozing lots in-game could be done as well, instead of steps 10-12.

However, I'm still unsure about whether that will make this tutorial doable with subhooded neighborhoods. I still haven't tested it, but here's a scenario that I'm afraid that will happen if the home neighborhood has subhoods:

1. Create a neighborhood, create five lots. In N001\Lots, those are named N001_Lot1.package through N001_Lot5.package.
2. Create a subhood, create three lots. In N001\Lots, those are named N001_Lot6.package through N001_Lot8.package.
3. Add another lot in the base neighborhood. This becomes N001_Lot9.package.
4. Only bulldoze base neighborhood lots in-game. You should then remain with lot packages 6 through 8 (subhood lots).
5. When you follow the tutorial, your template neighborhood may already have lots named Lot6, Lot7 or Lot8. By copying over those, two issues arise:
a) both subhood and base neighborhood LTXTs would link to the same lot package
b) instant corruption if the original lot (before copying over) was occupied, owned or had graves

The thing that bothers me about this, though, is that Mootilda was discussing something with simsample in her thread I linked to. Simsample had issues with adding some lots, as some strings would become lost if they didn't also copy the STR#s over. Therefore, if we were only to do the above "fix" I proposed, we'd end up with either missing lot names, orphaned STR#s or both.

(On the other hand, if it's the template neighborhood that has subhoods, perhaps it is possible to write down all LTXT instances that appear in the base neighborhood package, and only move lot packages that those LTXTs link to (and leaving the subhood lot packages behind!). Maybe.)
DJ. who?
Essential mods, cheats, tips & tricks for The Sims: Castaway Stories || Felicity Island for TS2
idemo autom!
Jawusa

I actually think your method works far better and is far more simple and efficient - this way, the template can have subhoods from the start, while the home neighborhood would act more like a Pets or Seasons stealth subhood (bringing only characters and no lots, as the subhood would get deleted). However, your method does rule out the home neighborhood having subhoods completely.

A random thing I thought of that I don't recall being discussed anywhere: will the graves be safe if they're in the inventory of a Sim while attaching the subhood the Sim is from to another neighborhood? Or is it mandatory to leave the graves on lots, and placing them in inventories only after the subhood's been attached?
DJ. who?
Essential mods, cheats, tips & tricks for The Sims: Castaway Stories || Felicity Island for TS2
idemo autom!
Jawusa

I consider it as dangerous to have a sim in subhood with urns in his or her inventory and add that subhood to a neighborhood. There's a chance that the game corrupts the grave inside the inventory.
So I'd add the neighborhood as usual and then move all urns into the inventory (after the subhood was attached) and move the sims out and then delete the subhood itself. That would be much easier.
Catalogue of Custom Neighborhoods for TS2
All Hood Building Group neighborhoods are available here
Want to get rid of EA's sims in neighborhoods? Check out my Clean and Empty Steatlh Hoods and Clean and Empty Neighborhood Templates
My Simblr
Indochine12
Test Subject
#7

HI!
I'd tried to create a Ãœberhood on my own (packaged inhabited lot to another clean hood) and i'd just learned that my hood will explode in any minute by corruption..
So I was wondering, if your method could work many times?
For example, I do your method with pleasantview and my new hood; Can I do this again with Veronaville and my hood occupied with pleasantview sims?? And again with strangetown and my hood occupied with veronaville+pleasantview sims??
If possible, do you think the corruption (if there is with ea premade hood... I don't doubt it but I don't know either) of each hood will crash my hood??
Thanks for your tutorial and i'm waiting for your answer!!
topp

Therefore, you only have one set of Sims that you move to new neighborhoods. For example, with only shipped neighborhoods, you can't move Pleasantview Sims to Veronaville, because Veronaville is already inhabited.

(The reason why you can't transfer Sims to an inhabited neighborhood is because with this tutorial, you're not transferring Sims, you're transferring lots and neighborhood terrain. And if the neighborhood whose lots and terrain you want previously had Sims living in it, those Sim references are still going to remain present in the lot packages, and that would cause corruption because the game would reference Sims that don't exist.)

Instead, to create an uberhood from shipped neighborhoods, try downloading shopping district versions of shipped neighborhoods from here, and then merging all of them in a single neighborhood.
DJ. who?
Essential mods, cheats, tips & tricks for The Sims: Castaway Stories || Felicity Island for TS2
idemo autom!
Indochine12
Test Subject
#9

Oh my!! Thanks a lot!! I didn't think that ''simple'' solution existed already. You save my day!!
And sorry for being such a noob i guess... that's a really long time that I didn't explore the sims community
Have a nice day ! and thanks again!
Back to top