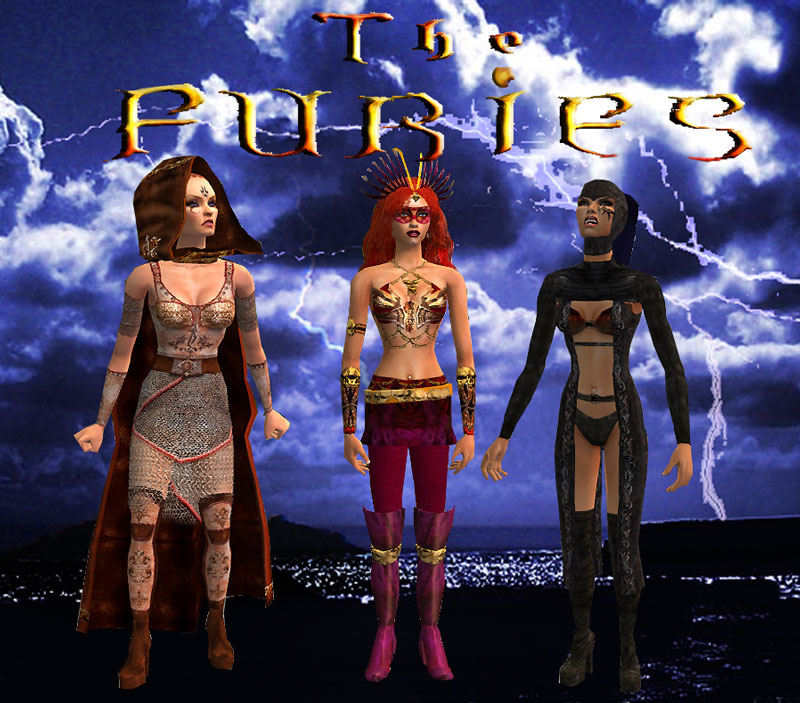 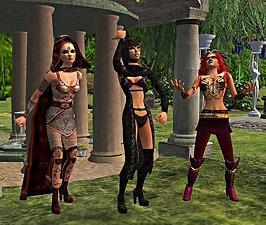 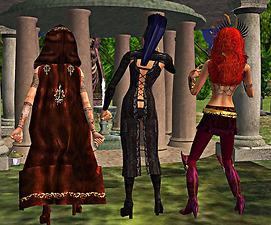 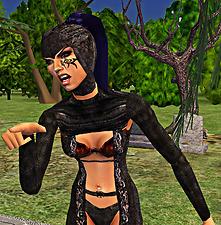 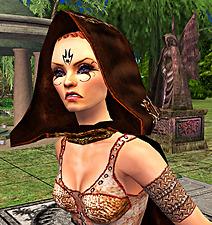 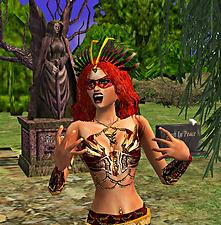 Anyway, I felt like making something a bit…outrageous, and I can tell you I had a blast creating it.

So that you don’t think I went totally berserk on you, here’s my little History introduction to the theme:

* * *
In Greek mythology the Erinyes or Eumenides (the Romans called them the Furies) were female personifications of vengeance
They were usually said to have been born from the blood of Ouranos when Cronus castrated him. According to a variant account, they issued from an even more primordial level—from Nyx, "Night".
Alecto ("unceasing," who appeared in Virgil's Aeneid), Megaera ("grudging"), and Tisiphone ("avenging murder").
They were avenging spirits of retributive justice, and their task was to punish crimes not within the reach of human justice and were connected with Nemesis as enforcers of a just balance in human affairs. The goddess Nike originally filled a similar role, as the bringer of a just victory. When not stalking victims on Earth, the Furies were thought to dwell in Tartarus, where they applied their tortures to the damned souls there.
The Erinyes are particularly known for the persecution of Orestes for the murder of his mother, Clytemnestra.

Of course, these are not at all similar to what both Greeks and Romans imagined. But I tried to make them incorporate a bit of each one’s attributes:

Alecto, the Unceasing, is dressed in black and ready to a non-stopping pursut.
Magaera, the rancorus, is hooded and cloaked to keep the resentment inside
Tisiphone, the avenger, wears the red of blood and the skulls of the sineful on her belt and gloves.

Hope you…like them and find them a “nice” home in your game.
May your 2007 be free on their pursut

HeadPiece : http://www.simstv.com/kj/sims2skinfantasy02.htm
This is a new mesh recolour, and means that you will need to download the particular mesh itself in order for this to show up in your game. See the Meshes Needed section or read the text for more information.
Files Need help with downloading or installing content? Click here!

This download requires one or more meshes to work properly. Please check the Description tab for information about the meshes needed, then download them below:
Also Thanked - Users who thanked this download also thanked:
Alpha skirt and high heels
by marvine
Alpha-Editable Dress Top - UPDATED Sept. 24, 2006
by HystericalParoxysm
Vampire Gowns
by sherahbim
Medieval Mermaid Gown
by iamliz13
Vintage Whimsy Clothing and Accessories
by sherahbim
Green dress
by onix87
The Romantic 1860s – Getting Ready for the Ball
by alexasrosa
The Fairy Godmothers
by alexasrosa
Atia's Roman dresses Set
by olisek
NeptuneSuzy - New Gown Mesh, Bump Map Enabled, Medieval recolor included
by NeptuneSuzy
Packs Needed
None, this is Sims 2 base game compatible!
Tags

Attention everyone!
To all those who did not read my last journal entry: I’m not making Sims clothes anymore. As a matter of fact, I don’t even have the game installed.
The clothes I uploaded to this site can be freely used – a note telling they are mine would be nice. Regarding the meshes…well, if they are out of the air, maybe you can try the graveyard or ask around for those who have them. They are not mine, so I really can’t help you.

Thanks so much for all your support, and if you want to see what I’ve been doing, you can visit my gallery at http://alexasrosa.deviantart.com/