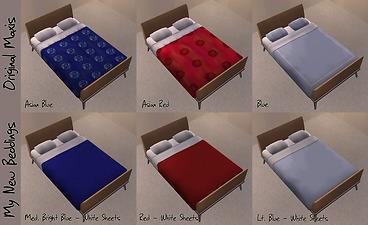 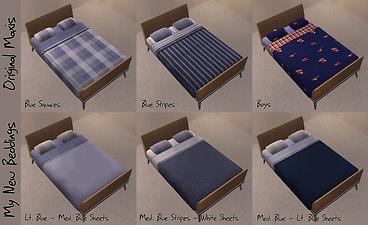 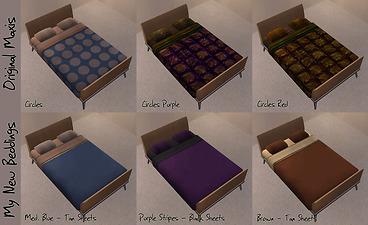 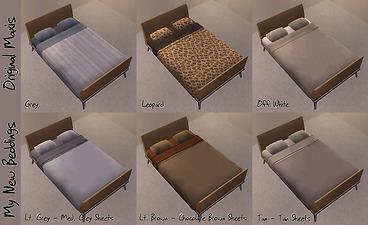 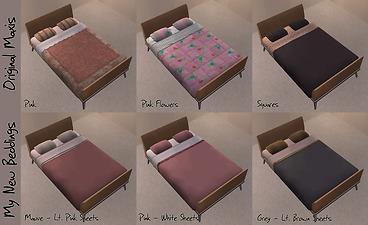 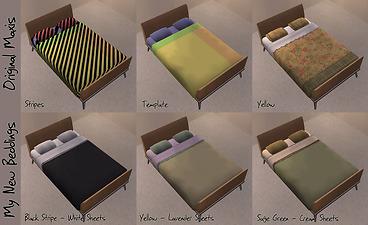 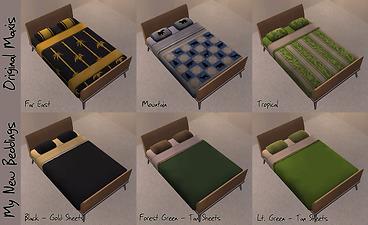 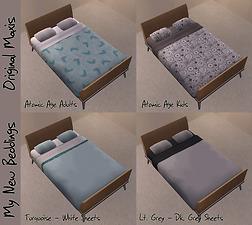 20,746 Downloads 2,475 Thanks  Thanks 305 Favourited 114,101 Views
Picked Upload!   This is a picked upload! It showcases some of the best talent and creativity available on MTS and in the community.

Inspired by a WCIF thread on S2C, I got to thinking how 95% of the Maxis beddings are, in my opinion, either unusable due to being too distinctive, or downright fugly. So, in my inspiration, I decided to replace them.

Yes, all of them.

Okay maybe not -all- of them as I don't have Teen Style Stuff and I know there's a few in that, but all the rest anyway.

However, I know that some people may want to keep some of the Maxis beddings, so I have made my default replacements such that you can pick and choose which you may want to replace.

I have tried to keep most of the beddings fairly close in overall colour and style to the originals, so that rooms already using the Maxis beddings will suddenly not go totally mismatched. The main differences are the "stripes" bedding (which went from the zwtf pastel-and-black diagonal stripes horrorshow to a nice black pinstripe with white sheets) and the two "circles" bedding which you will recognize as the "seriously wtf is that horrible thing" beddings. Also, the "mountain" bedding from Bon Voyage - shades of blue with black quilted animals and trees - has turned into a nice forest green as, well, there was no forest green and I already had several blues, and because I wanted to.

Please see my screenshots - the images in the top rows are the Maxis beddings and they are labeled with the Maxis names for that type of bedding. The default rar files have the same names so you can pick and choose which beddings you want to replace. I also have included a rar of all the beddings if you just want to replace everything.

And because I know people would complain that they don't want to replace certain ones but they still want to use my beddings... all of my replacement beddings are available as non-default, regular, custom beddings and are clearly labeled with what they are (so you can pick and choose which of those you may or may not want) in the "Non-DefaultCustomBeddings-ALL.rar" file.

Quaxi and everyone else who has contributed to the development of SimPE.
Everyone who gave their opinions on my thread on this on S2C.
darter1234, for the original bedding template that I modified to make my textures template.

MTS2 and the rest of the staff, especially Delphy (and especially especially D for delightful random "creative breaks" tee hee) for having such a lovely place I could learn to make pretty things for pixel dollies.

If you would like to make more beddings based on these textures, feel free to do so - I have attached a file for creators only which includes my layer-separated .psd with the textures I have used. It may be a little bit confusing but it's a heck of a lot easier than starting from scratch.
Other Information