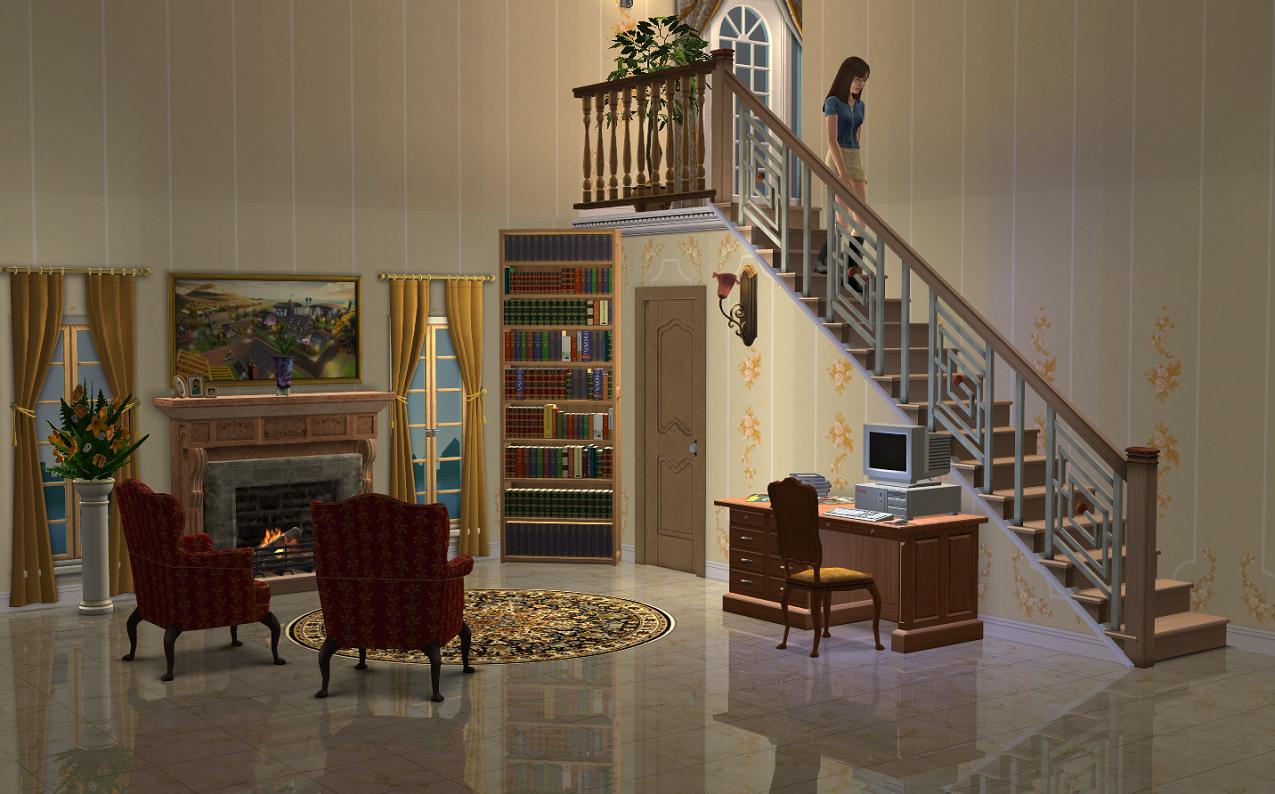 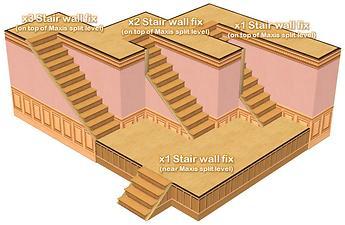 61,637 Downloads 3,511 Thanks  Thanks 661 Favourited 241,365 Views
Picked Upload!   This is a picked upload! It showcases some of the best talent and creativity available on MTS and in the community.

Created by JRW
View Policy / About Me View all Downloads
Uploaded: 4th Jun 2010 at 12:13 AM
Updated: 4th Jun 2010 at 6:56 AM
It's not up until recently I've begun meshing and was a tad surprised this area had been rather neglected.
The stair wall, a.k.a that slant wall at the base of the stairs can now look appropriate for various of structures.

These are nothing more than differently shaped oblique full-wallmask windows.

How to apply for regular stairs (any simpler than this would be paying a homeless guy to do it for you):
1. Build the stairs;
2. Build a wall along them;
3. Place on it object called "x4 Stair wall fix" with the desired recolor.

Ditto – use "x{1/2} Stair wall fix (on top of Maxis split level)" if the upper fix shouldn't go all the way through.


Fixing the foundation stair wall is a bit trickier, since it requires basic acquaintance with the CFE cheat (it being the only known way to attach a wall to the foundation):
1. Build the stairs;
2. Using CFE build a wall along them;
3. Lower it to the foundation height;
4. Place "x1 Stair wall fix (for CFE split level)" on it.

NOTE that the wallmask of the CFE adapted objects may look distorted.
It's a tiny built-in bug involved with CFE construction.
Bringing the walls down and then back up again should refresh the display.

Likewise, you may use the one that has "x2" in its name if your foundation is 8 clicks high.
These two are intended for general work with CFE split levels, I just gave the foundation as an example since it'll be most commonly used.


At this point a fairly askable question may rise – why have so many objects with strict assigned usages?
Why not just make 4 differently heightened single tiles and apply them customly?

Well, for a number of reasons actually:
First – due to lighting behavior the objects may look fragmented (since shadows are casted on the lower parts) and not line up right.
Each of them will also need to have abrupt edges and thereby lack the softened finish they have now.
Second – the wallmasks will have to fully stretch horizontally, which will create a nasty hole in the corner of the walls when used with interfacing rooms.
Noticed those vertical planks these have for such cases? That's what keeps the corners intact.
Tap yourself on the shoulder if you truly understood what I just wrote.
Third – time's a charm.

So yeah, those are 10 files.
The remaining 6 are recolors of the main 4-tile object that the others borrow theirs from. Don't delete it.
Apart from the default texture, there are the notorious three wooden hues and three shades of grey:

Inevitable bugs (what good would life be without them?) –
Sadly, since the game sees this as a wall with windows, surplus shadows may be casted if placed outside.
I find this a fair price to pay for this excellent result but if you're familiar with a way to fix that, do enlighten us.

Can be found under the Staircases category in Build Mode, for 0$ (to pay for bug fixes? I don't think so).

Credits:
BIGGEST THANKS EVER go out to MaryLou and IgnorantBliss for guiding mesh-dummies like myself through.
MTS moderator Phaenoh for advising me to add the frame and to set this in the stair category.
Sim PE creators as well as Numenor, RGiles and WesHowe, among whose deeds happen to be object editing tools.
Murano for the reflective floors which I used for the general snapshots.
HugeLunatic whose mod I used to prevent those rugs from sinking into the floor.
My parents.

Don't do anything with my stuff that I wouldn't do.