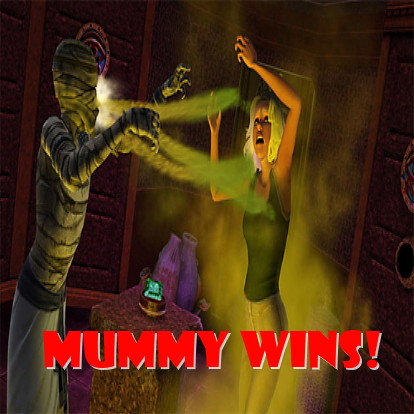 5,949 Downloads Quick download 325 Thanks  Thanks 64 Favourited 44,421 Views
Personal Picked Upload!   This is a personal favourite of the creator!


What this Mod does:
This is an XML Tuning Mod that makes Tomb-Mummies MUCH stronger and fearsome. Ever since WA came out I felt Mummies reputation was a little bit overestimated. Moreover, a patch came out later (don't remember which one) and lowered the already low base chance of cursing a Sim to a miserable 0.2!! That was unconceivable for me! Mummies were supposed to be mighty and YOU are supposed to fear them, not to start a new "Mummy-Hunting Season" every time one comes out from their sarcophagus (their worst mistake) like I do. I remember I got cursed once, but it was WAY long ago, and just because I sent my Sim to Egypt first and to China later. But now no more! I enhanced Tomb Mummies skills and base chance of victory DRAMATICALLY!
I'll make you an example: I sent my Lv.10 Martial Arts Sim on a tomb and had him fight a mummy FIVE times: he only managed to win the fight twice; he got cursed twice and passed out once. It is adviceable for your Sims to HIDE or RUN away from Tomb Mummies unless you want them to be cursed (for real this time). In order to ensure a rather high chance of victory, your Sims must have not only Lv.10 skill in Martial Arts, but also a pretty high Athletic skill (better if you also make them meditate before the fight) or else you will be cursed (or just passed out if you are REALLY lucky, in that case you Sim will be REALLY scared).
Fear the Mummies! Let them rest or else... worse for you =P
There are multiple versions for yo uto download, so pick the one you want! =)

- sHoNi's_Mummy_Overhaul_Default+IC: This version has only an increased chance of being cursed by Tomb Mummies if your Sims lose against their attack. Their overall strength and abilities remain vanilla.

- sHoNi's_Mummy_Overhaul_Stronger+IC: This one has the base chance of being cursed increased by a little amount but Tomb Mummies will more likely win in a battle than default. You have to be Lv.10 Skill in Martial Arts and at least Lv.7-8 in Athletics for a rather good chance to win against them.

- sHoNi's_Mummy_Overhaul_Very_Strong+IC: Mummies here are indeed VERY strong and their base chance to win a battle is very high, even if your Sim has Lv.10 Skill in Martial Arts and Athletics. I suggest you to meditate before a fight, or to use a Sim with traits like "Lucky", or "Mean Spirited". Better if also with some special moodlets like "Sphinx Blessing" or "Oddly Powerful" to enhance your chances to win. You WILL get cursed if you lose 8 times out of 10.

- sHoNi's_Mummy_Overhaul_Insane: This will turn all Tomb Mummies to an impossible army of Undead. Their skills are maxed out. Their base chance of winning a fight is 99% and you WILL be cursed EVERY time you lose against them, which means pretty much ALWAYS. This is for all you Daredevils out there. See ya in Hell!

There is another package that is HIGHLY recommended if you download this mod, that lowers the Mummy's Curse countdown from 14 Days to 7 (it remembers me of "The Ring" lol). 14 Days are way too much for me. You can do a trip to the Sphinx like 10 times, manage to max out the Snake Charming Skill and get plenty of Snake kisses or to reconstruct 5 blessed sarcophagi. Well now you got to hurry, because the Mummy will come... "Seven Days"...
=) There's another package for you daredevils that shortens the countdown to 3 Days. Have fun with it

If you want my personal advice though, the recommended pick would be the last one:
- sHoNi's_Mummy_Overhaul: this one mixes the "Very Strong" features with the "3 days-curse", making a good balance and the perfect challenge. Again, you choose what you want!

Compatibility:
This Mod is not compatible with other mods that alter Tomb Mummies behaviour or Mummy's Curse countdown.
This is NOT a core mod.
This mod is 100% compatible with my Vampire Overhaul

It should be working with all EPs. Let me know if there are bugs or issues.

Where to install:
Simply drop the package to the usual location: "My Documents/Electronic Arts/The Sims 3/Mods/Packages" and delete your cache files.

Credit: S3PE Tool, my brother for testing, myself =P

Feel free to PM me for any issues =)