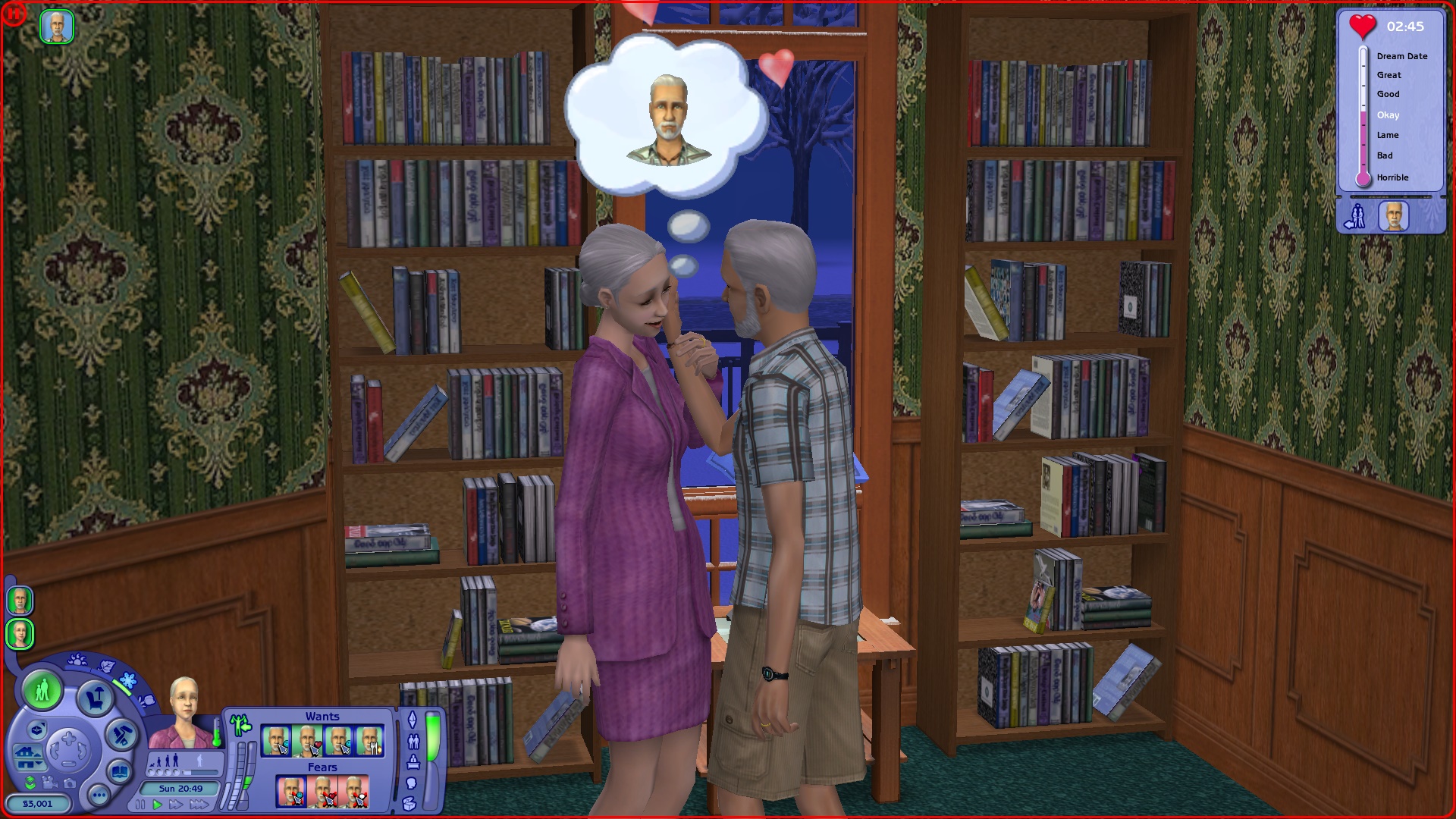 95 Thanks  Thanks     18 Favourited
There are multiple mods here related to how dates and outings work in Sims 2:

Date-Outing Mod: In the Sims 2, it is very easy to have great dates and outings. Dates are especially easy, because the game heavily modifies the date score for satisfying wants and fears. Such a design would only make sense if there was a cooldown on wants and fears, that is, it would make sense if sims sometimes were unable to receive any wants/fears. Such a thing doesn't exist, so the player constantly gets easy wants like play or flirt, and these heavily increase the date/outing score. Basically, dates and outings are all about sims who stay in one place and the player constantly clicking on Play or Flirt or Talk, which is guaranteed to lead to a great date or outing.

This does not make any sense to me. In my opinion, the score should not be modified that much by wants and fears. This mod heavily decreases the effect of wants/fears on the date/outing score, which will encourage the player to focus instead on increasing STR and LTR, but even more importantly, on achieving all the score-boosting, unique events as determined by Maxis. There is a large number of date/outing events in the game which modify the score. I won't talk about those here, you can either find them in-game, or open SimPE and have a look yourself.

Dates Cost Money Mod: This mod makes it so that sims need to pay 100 simoleons to be able to successfully ask sims on date. If you have less than that, the interaction fails. This mod also fixes an oversight which makes it so that the game satisfies the sim's Ask Sim On Date want even if the sim gets rejected while asking a sim on date on phone, so the sim needs to succeed at asking sims on date to be able to satisfy this want now. In addition, I have made it so that when a sim asks another sim on date on phone, they will satisfy their Be Rejected for Asking Sim On Date fear if the other sim is sleeping.
Tuning: If you want to change how much money the sim pays to be able to successfully ask sims on date, then click on the resource Phone - Date Call, find the line that says Budget - Make Transaction - Debit nID, click on the pop-up wizard on the right and change the number in the second box from 100 to however much money you want the sim to pay. Then, do the exact same thing by clicking on the resource Interaction - Person A. Then, click on the resource called Set Result, then the line called Budget - TEST - Can nID Afford?. Left-click on the pop-up wizard and change the number in the third box from 100 to whatever you set the previous numbers.
Dates Cost Money Mod - UPDATE 1: Before this update, the game charged your sim even if the other sim rejected the date on the phone. Now, the game will only charge your sim if the sim succeeds at asking the other sim on date.
Dates Cost Money Mod - UPDATE 2: Before this update, when Sim A asked Sim B on date while being unable to afford the date, the game made the sims play successful interaction animations, instead of failure animations. This is fixed.
Dates Cost Money Mod - UPDATE 3: Before this update, sims would have to pay to go on a date even if the date was a networking reward (Apartment Life). Now, they won't pay for a networking reward date.
Dates Cost Money Mod - UPDATE 4: Asking a sim on date on the phone cost 500 simoleons rather than the intended 100. This has been fixed.