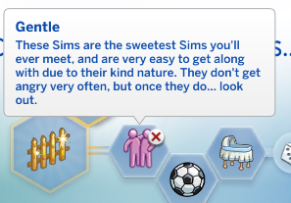 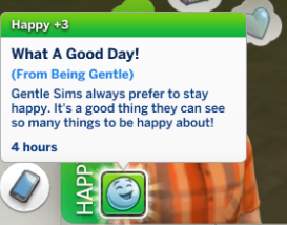 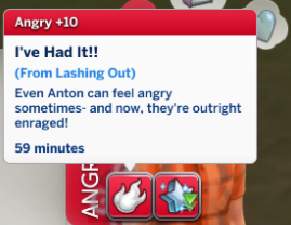 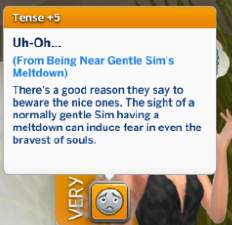 263 Thanks  Thanks     49 Favourited
Update 6/18/20: I realized that I erroneously set the Anger multiplier to only 0.2x, instead of the intended 0.5x. I would have fixed this earlier, but it was in the upload queue by the time I spotted it. This has been rectified- I spent too much time on that snap moodlet for it to go unused!
Later the same day: Conflicts with Evil, Mean, and Hot-Headed have been implemented! I also figured this one out between submitting this and it appearing on the site. It also has the CAS select animation of Family-Oriented!

These Sims are the sweetest Sims you'll ever meet, and are very easy to get along with due to their kind nature. They don't get angry very often, but once they do... look out.

This is a trait in the Emotional category for Sims that are overwhelmingly sweet and slow to anger... but Beware the Nice Ones is in full effect, so best not to mess with them once they do get angry.

Under normal circumstances:
On the rare occasion that Angry becomes their dominant emotion, everything changes. They receive a powerful Angry moodlet, which differs depending on which version of the mod you have installed. The main version has +10- +5 under the halving effect- to reduce the risk of a cardiac explosion. The other version, Stronger Snap, has a whopping +1,000, and is intended for those who either have a mod to suppress emotional deaths, or are willing to accept the risk of their Gentle Sim dying. Either way...
I've Had It!! +10/+1,000 Angry: Even {0.SimFirstName} can feel angry sometimes- and now, they're outright enraged!
This moodlet only lasts for an hour, but during that hour, their rage has quite the noticeable impact.
Other than that, I hope you enjoy the trait!


This mod has two versions with different intensities for the I've Had It!! moodlet. Only install one!