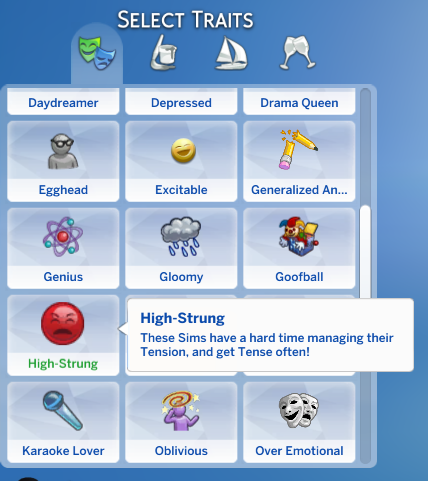 Update 6/19/20: Updated for the latest patch, and now conflicts with Cheerful and has the CAS select animation of Squeamish!

After my first trait succeeded so overwhelmingly that it was somehow downloaded over twice the number of times it was viewed, I decided to take another stab at this whole modding thing!
These Sims have a hard time managing their Tension, and get Tense often!'
This is a trait within the Emotional category for Sims who get tense very easily. Alongside the Tense moodlets that show up, the power of the Tense emotion is boosted an additional 1.2x. This trait functions as a traditional Emotional trait, and it has no whims associated with it.

The following buffs are added, all of which appear randomly just like the buffs of any other Emotional trait:
New Buff: Feeling Tense- +1 Tense. "High-Strung Sims tend to feel Tense at the most inopportune moments!"
New Buff: Feeling Overwhelmed!- +10 Tense. "Everything is happening all at once!!!"
New Buff: Feeling Calm- +5 Fine. "Finally, you can experience a moment's peace."

Additional Credits:
The good ol' Mod Constructor by Zerbu!
The prior linked Meaningful Stories mod by roBurky, for the mechanics of the primary version of the mod.


Download the +1 Only version if you DO NOT have a mod that creates variable moodlets. I am aware that having the vanilla-based version be the secondary download is unusual, but with the mod setup I use, that's just how it happened.