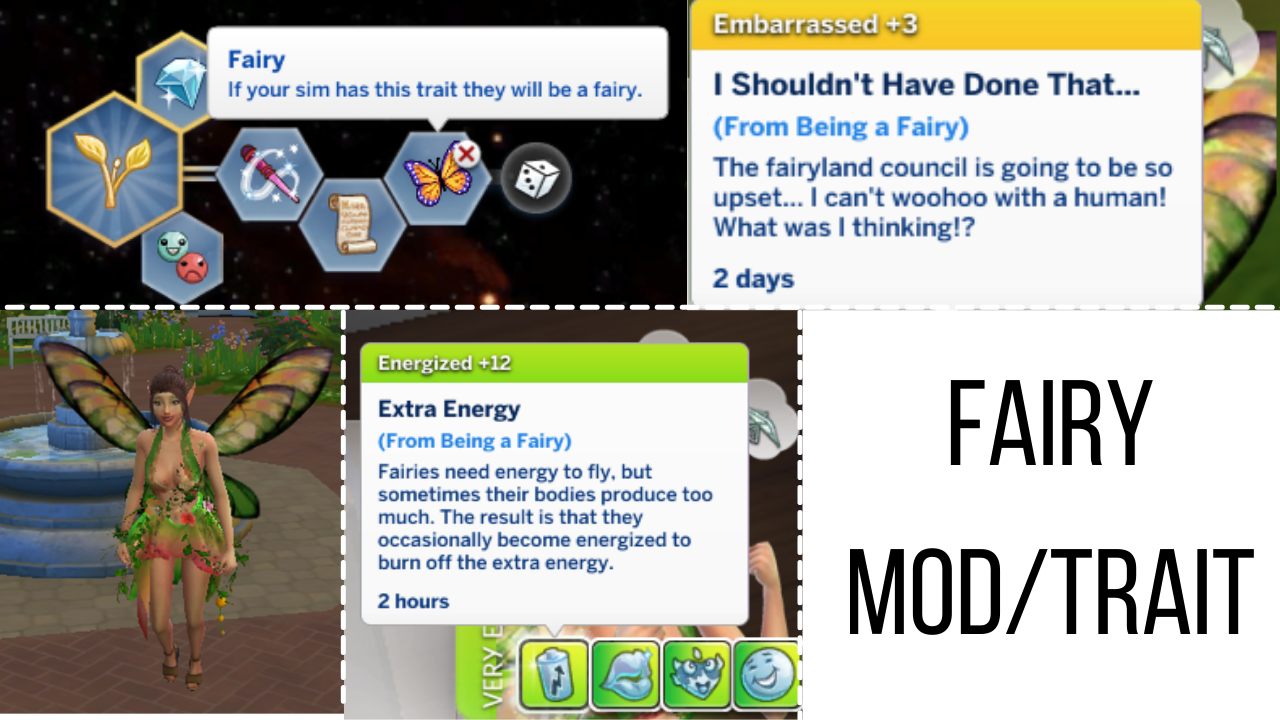 I noticed the Nyx fairy mod was outdated and you can't download it anymore (From what I know), so I tried my hands at making a fairy trait. I'm not sure if there are any fairy mods/traits currently usable, but if there is I didn't see it.

Skills:
Fairy sims will be treated like they have max gardening skill, even if they haven't gotten to level 1 of the gardening skill yet (example: they could revive plants if they've never touched a plant before.). It's very hard for them to learn mental skills.

Whims:
Catch a fish, bait hook, fish an hour, mount fish, level up fishing skill, fertilize a plant, graft a plant, harvest a plant, revive a plant, spray a plant for bugs, talk to a plant, trim a bonsai tree, water a plant, weed a plant, buy a bonsai tree, and level up gardening. There's a lot of whims...

I couldn't get the social interactions to work, so there isn't much in this trait. If you want your fairy sim to fly, you have to download the "Walk Style Changer" mod by Onlyabidoang and select one of the ghost walk styles by clicking on your sim, walk style changer, and then the ghost one you want.

If your sim has this trait they will be a fairy.
Ages:

Extra Energy
(From Fairy Trait)
Fairies need energy to fly, but sometimes their bodies produce too much. The result is that they occasionally become energized to burn off the extra energy.
2 hours

Human World
(From Fairy Trait)
Is this a dream? How am I even here? I should be in fairyland.
2 hours

Wing Shamed
(From Fairy Trait)
Why do humans keep wing shaming me? They can't even fly!
2 hours

Humans
(From Fairy Trait)
It's pretty rare to see a human where I'm from, my friends are going to be so excited about how many I saw!
2 hours

Homesick
(From Being a Fairy)
Fairy sims have to go to parks every so often, or else they get homesick. Parks are a lot like their home, fairy land.
2 hours

Technology Who?
(From Being a Fairy)
Fairies just don't understand technology.
90 minutes

It's a Fairy!
(From Fairy Trait)
Human sims are fascinated by fairies!

I Shouldn't Have Done That...
(From Being a Fairy)
The fairyland council is going to be so upset... I can't woohoo with a human! What was I thinking!?
48 hours

So Pure!
(From Fairy Trait)
Look at the little kids... Awww, so cute and pure!

This is a hidden trait, you should never see this.
Ages:

Ashamed
(From Upset Council Trait)
There's another fairy... Hope they're not a member of the council.