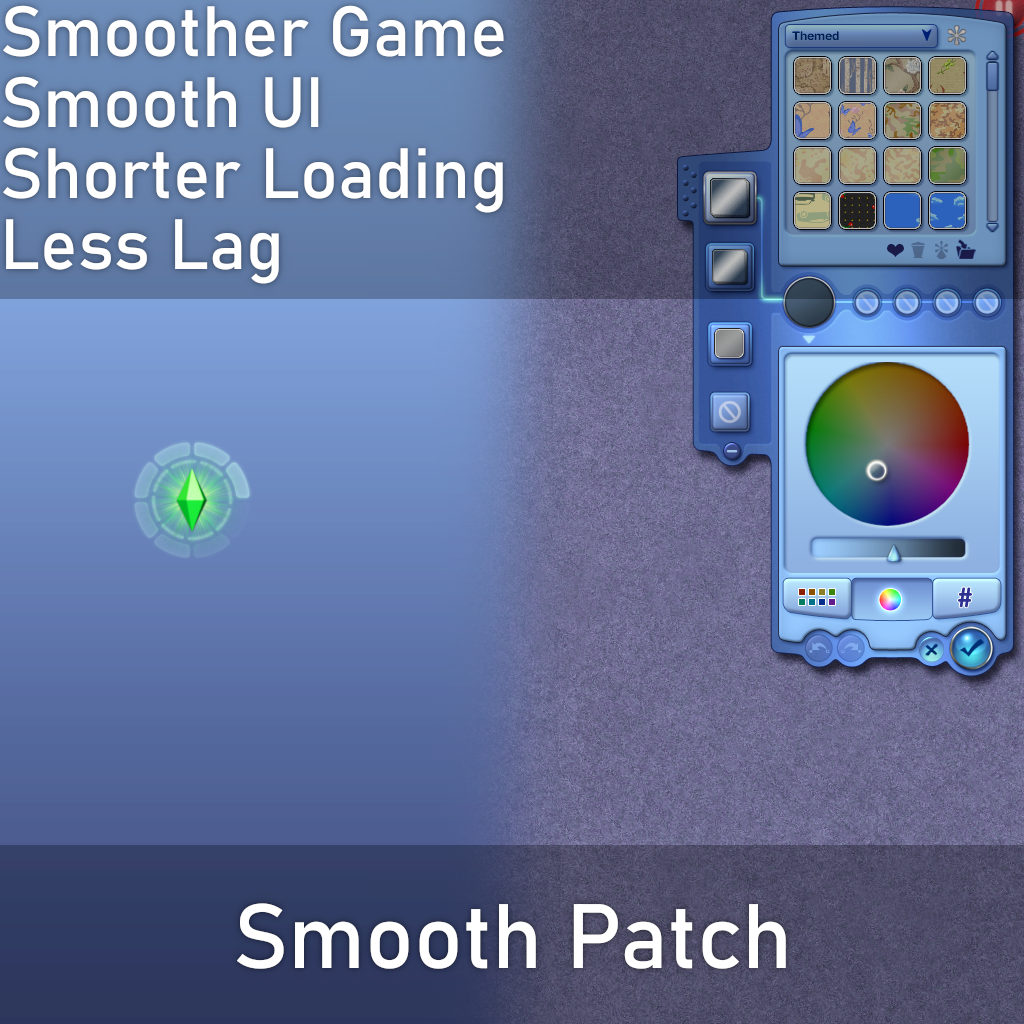 123,298 Downloads 1,778 Thanks  Thanks 730 Favourited 281,194 Views
Featured Upload!   This is a featured upload! It showcases the best talent and creativity available on MTS and in the community.

Update 1.2
- Improved FPS Limiter accuracy.
- Package installer/uninstaller no longer goes fullscreen borderless.
- The package installer/uninstaller will now be limited to 60 FPS regardless of your FPS limiter setting, as it can normally get into the thousands and it doesn't make much sense.
- Origin: Installing or uninstalling CC via the launcher no longer makes the patch not take effect once you launch the game.

Update 1.1 Added Borderless and FPS Limiting options.
This mod is not an all in one solution for lag - other improvements like NRaas mods are still recommended.

Overview
This mod alters the speed at which the game's processing runs, which improves the overall performance of the game and some loading times. Most noticeably in Create A Sim, Create A Style and Buy/Build.

In addition, more specific fixes are included for The Sims 3:
- CAS clothes are now loaded in as you scroll rather than staggered, greatly improving CAS performance.
- Create-A-Style no longer gets locked up and unusable while patterns load.
- Create-A-Style drag and drop has been optimized a bit, making it smoother.
- Certain CAS audio quirks such as music or voices sometimes not playing should be fixed.

The Sims 3 - Origin/EA Desktop App
Download the "ld_TS3PatchEA.zip" file and extract its contents into your Sims 3/Game/Bin folder, then move the "Packages" folder into your "Documents/The Sims 3/Mods" folder. Make sure you take out the "ld_SmoothPatch_MasterController.package" file if you don't use NRaas MasterController.

If you use Origin, open the "TS3PatchLauncher.cfg" file with a text editor and replace the "PlatformName = EADesktop.exe" line with "PlatformName = Origin.exe", then save the file.

You will need to run the game from "TS3PatchLauncher.exe" everytime for the mod to kick in, or you can download my Custom Launcher, which will load the mod automatically if it's installed.

The Sims Medieval - Origin/EA Desktop App
Download the "ld_TSMPatchEA.zip" file and follow the same steps as TS3 above, minus the Packages.

The Sims 3/Medieval - Retail/Steam
Download the "ld_TS3Patch10.zip" file and drop the ddraw.dll, TS3Patch.asi and TS3Patch.txt files into your Sims 3/Game/Bin directory, and move the "Packages" as explained above if you're installing for TS3. Otherwise, delete the "Packages" folder.


The "TS3Patch.txt" file contains the basic configuration of the mod, along with some comments on what each option does.

The most important setting is the "TPS = 500" line. 500 is what works best for most people, the higher this value is the smoother the game will likely be, although more taxing on your system. If you're going to try and set this value to over 1000 or anything between 500 and 1000 you should set the "HighPrecision = 0" value to 1, otherwise the value will be rounded.

The "Borderless = 0" line can be set to 1 if you want your game to run in Borderless mode if it's set to run windowed.

The "FPSLimit = 0" line can be adjusted if you wish to cap your FPS. It's always better to use your GPU control panel for this though if it's an option.

The "Debug = 0" line can be set to 1 if you want a message to pop-up when you launch the game, to make sure the patch is working.

Finally, the "Delay = 0" value can be increased in intervals of 1000 or 5000 if the patch is failing to apply. This shouldn't be necessary however, but the option is there in case it still doesn't work.

"ld_SmoothPatch.package" Can be opened with S3PE, contains XML tuning settings inside.

kCASMusicFix - Set to True by default, setting it to False disables the CAS Music fix. Might help if music is buggy for you with this mod installed.


Troubleshooting:
This mod might get detected as a virus, as it modifies the game's executable memory at runtime in order to modify a hardcoded function. This means some antivirus software, including Windows Defender, might remove it or prevent it from running correctly. If this happens you should add an exception to your Sims 3/Game/Bin folder.
Source Code for the mod is available below, so anyone can verify it does not contain malicious code.
If you get errors, try downloading the latest version of VCRedist. If you're running a x64 OS, download both the x86 and x64 versions.
If the patch doesn't work try increasing the Delay to about 1000-5000 in TS3Patch.txt

Download the file for your version of the game, either Origin (ld_TS3PatchOrigin.zip) or Steam/Retail (ld_TS3Patch10.zip)

3. Extract the contents of the zip file into your Sims 3/Game/Bin directory. If you're an Origin user, launch the game from "TS3PatchLauncher.exe"

3. Extract the contents of the zip file into your Sims 3/Game/Bin directory. If you're an Origin user, launch the game from "TS3PatchLauncher.exe"