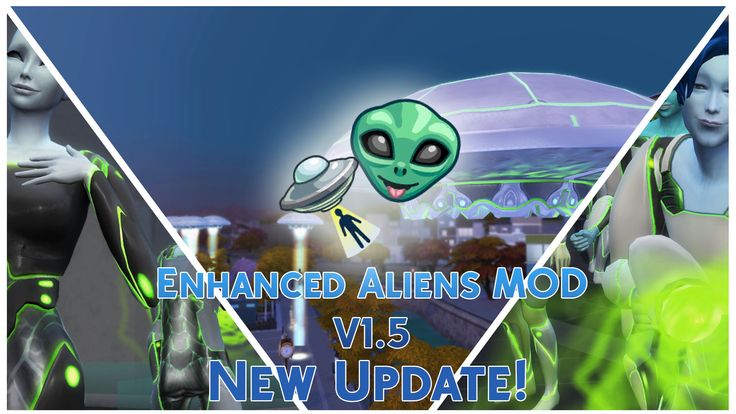 11,181 Downloads 158 Thanks  Thanks 78 Favourited 41,338 Views
Created by GOOD_BOYgoneBAD
View Policy / About Me View all Downloads
Uploaded: 23rd Dec 2021 at 1:00 PM
Updated: 11th Jan 2022 at 11:53 PM
So, we all know Nyx/NeilSimming, a great modder, who was sadly beaten. He/she/they created memorable mods, but over time the updates outpaced Nyx's ability to maintain them. When he went inactive, many modders took the concept of his mods and made their own mods, it's great, the game was incorporating functions that used to be part of their mods, leaving Nyx in oblivion. This mod was greatly missed, as there are not enough mods for aliens on the internet, and Nyx made one of the best ones.

After having clarified this, I hope you can understand that my intention is nothing more than to give the opportunity to common simmers, without much knowledge about programming mods like me, to play with a good mod, which spent two years without anyone who got interested in it, and surely would have remained that way for many more years.


WHAT DOES THIS MOD DO?
I'll quote Nyx's original description from WaybackMachine:

I'm back with another mod that isn't the werewolf mod, yay.
But this is because I felt so bad for the aliens that I couldn't just leave them without exciting powers!

So let's get into it and let's describe this mod.

-Brand new abilities for the aliens-

Now aliens have a new need, Which is called "Brain power". This need will decrease periodically over the time, but it will be veeeery slow to decrease completely...
Unless you use your powers! The need's maximum point is 100 and powers, depending on which one, will decrease the bar.
Here are the powers "consumption" points:
- Analyzing and empathizing with other sims will withdraw 15 points.
- Transmuting metals and Bio-draining sims will withdraw 30 points.
- Reviving dead alien pets and bio boosting a sim will withdraw 40 points.
- Commanding sims will withdraw 60 points
- Lastsly, erasing a sim's memory will withdraw 80 points!
When it gets low, the buffs will be the same as the tired buff, but theiy will have different text.
How can you recover brain power you ask? Just do a nap on a sofa/on a bed/wherever ya want, make them focus a bit in their sleep, and then (when some alien symbols show up) they'll start to recover their precious alien energy. If you won't think about that, aliens will automatically do a nap on the sofa. If the bar is too low, they'll pass out.


-How to unlock these new functionalities?-

There are two specific methods on how to do it:
The First (Manual method, available for grown aliens): Grown up aliens don't have the new abilities just yet. To unlock them, you'll have to go to the rewards menu, and buy the first trait named "Enhanced Alien Abilities", which costs 0 points.
The Second (Automatic method, available for alien children): You just have to wait for them to grow up into teens, and they'll develop their powers just by doing that!


With this said, I hope you'll enjoy this mod as much as I do!

Now your alien is able to conquer the human race! Just select the option by clicking on your alien, select the "Alien" menu, and then click on "Conquer the lot!".
By clicking on this interaction, your alien will pull out a strange communication device that will start the event. A message will popup but It seems like it has some symbols with no meaning, but it is actually a crypted message and you won't be able to find out what each word means UNLESS you examine it on the strings of the package (so outside the game).
Let's keep talking about the invasion, after this communication, your alien will start to laugh like a maniac, and all the sims (or some of them) on the lot will be abducted by an alien UFO (by the way, the abduction in this event will probably get some sims pregnant, since there's an increased chance of alien pregnancy). Meanwhile, some other aliens (lots of them!) will start spawning on the lot and will perform a "scan" animation.
Your and other aliens will have the "Conquering this lot!" (+7 confident) buff. The event itself will last around 6 hours, you'll be able to understand it by the fact that your alien doesn't have the event's buff anymore. It doesn't stop there though, once you've conquered even a single lot, prepare to see aliens even without this event activated because they will start to roam around your neighborhood!
(The next update will feature a consequence for the abducted sims)
ADD-ON FOR SEASON: If you have Seasons, the weather will change as well and It will become cloudy as soon as the event starts.

- I've added a response animation to the sims who are victims of mind control.
- I've added a new order:
Order to Sleep: Your Alien will command sims to Sleep on the floor... Be sure the floor is comfy, because they are gonna be there for a while...
- I've added the "Get this Sim Abducted" interaction where your alien will pull out a strange remote to get the victim abducted by another alien.
- I've added the "Restore Brain Power" interaction where your alien will kneel on the floor, they will concentrate, and lastly they will slowly recover precious brain power.

This mod contains edits of the following resources:

So if you have any mod that edits any of these resources it will probably conflict.

So, I hope this can bring back the interest of the modder community for aliens, the mod is fully playable again, but it would be very kind if someone helps us make it better, adding new features or making new game systems work with it.
Please let me know of any bug you find, hopefully future updates won't breake it again...
Files Need help with downloading or installing content? Click here!

I left The Sims 4 indefinitely, EA broke my heart so many times that I lost hope in the future of The Sims.
Please forgive me if you used any of the mods in this profile, I didn't mean to leave you alone, I really tried to stay, for you, but I couldn't fight the disappointment.
I had been preparing a last update for both of them but EA updated the game again and my progress was lost.

If you continue to use either of those two mods they shouldn't cause serious errors, but you could be missing out on some possible new features of The Sims 4, this is because the game will continue to use the old code from those mods, that modify certain things like the rules for trait inheritance (including occults) or the rewards store, if you find such annoyances please consider uninstalling the mod.