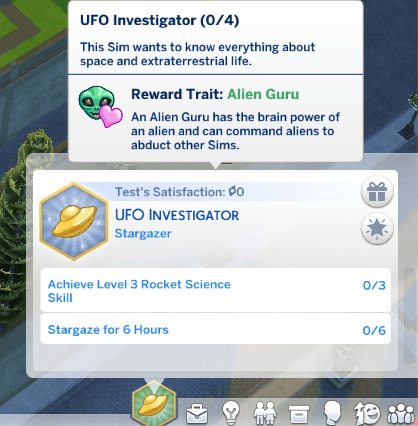 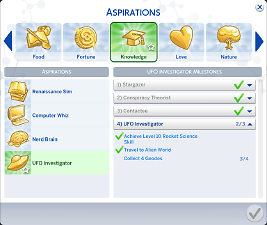 This mod is currently obsolete, but an updated version is being maintained by Itsmysimmod. It can be donwloaded HERE.

This mod requires Get to Work. It was made with game version 1.13 (but I'm keen it is still compatible with later versions, let me know if there's a problem though).

Q: New interactions do not show up!

: Did you use WinRAR to unzip the mod? Please re-download and try unzipping with 7-zip and make sure to enable Script Mods in the game options. If the problem persists, post here and state your game version.

The new aspiration, trait, interactions and whims do not override any of the game resources. However, I had to edit some resources to give alien powers to Alien Gurus. Therefore, this mod will conflict with any other creation that modifies these:

This mod is currently available in English and German.

Download the strings, rename the file to your language's code (e.g., SPA_ES, FRE_FR, DUT_NL) and send me the file once you're done editing it with Excel or a text editor.

Armilus for their German translation.