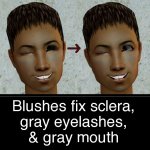 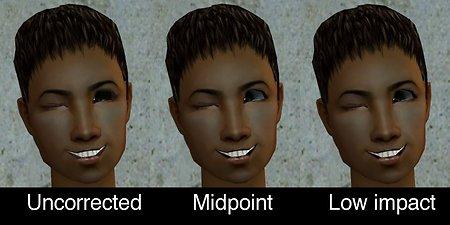 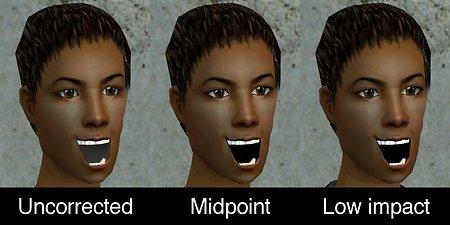 Alkaloid built a sclera corrector, http://www.modthesims2.com/showthread.php?t=252432 , to fix eyes that tend to go black or pink when they cut far over to the side. (In the illustration above, a Sim sitting at a bar and turning to wink evinces the glitch.) However, it necessarily makes a particular assumption about iris size. But eyes are diverse-- and many, including a number of the popular Enalya eyes, have significantly larger irises. Hence, having cleared the idea with alkaloid, here's my attempt to have most of the best of both worlds...

The "Low impact" version is my attempt to build a sclera corrector that makes as few changes to the look of the underlying eyes as possible, while still correcting their appearance when cut far over to the side.

Close-ups of the Enayla brown eye named "Below", from
http://www.modthesims2.com/showthread.php?t=181654 :

Since it was an easy feature to add, these also correct the grey eyelashes / grey mouth problem for skintones subject to them.

These are multiselectable blushes, in the same bin as alkaloid's original, and layering at the same level. (Alkaloid's okay with the collision, though; there are good reasons to layer these so high, and he noted it's wise to keep all sclera correctors together.)

Since these are directly derived from alkaloid's work-- indeed, all I changed was the alpha-- they inherit their terms of use from the original. See http://www.modthesims2.com/showthread.php?t=252432 .