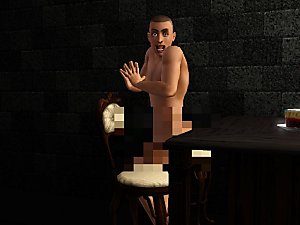 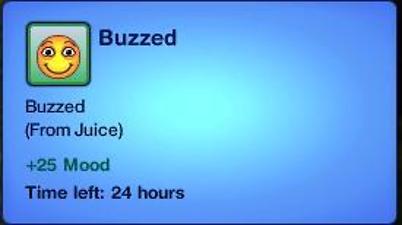 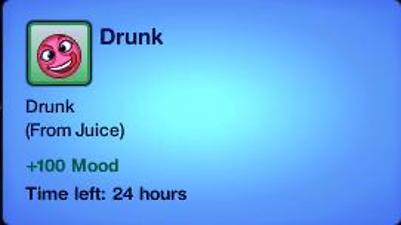 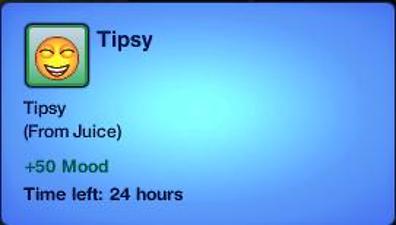 Updated for the new patch. No changes except I accidentally uploaded the shorter values by default, so moodlet values are buzzed 3h, tipsy 6h, drunk/hangover 12h.
Remember you can always tune these if you want them longer.

Changes:
- The counter buff now has a name "Wait for it..."
- You now get drunk from playing juice pong

- You now get drunk from doing a juice keg stand

Bugs:
Pouring juice doesn't get you drunk. I do listen to the kJuiceKegPourJuice but it doesn't seem to get activated.

Now when sims have a drink, there is a counter moodlet, 20 minutes. When that runs out, the drunk interactions happens. If you drink while you have the counter, the counter resets. You can change the counter time out from the buffs xml in the mod. The moodlet doesn't have a name because I couldn't figure out what to call it, if you have good suggestion I'm all ears and can update the name the next time this mod needs updating.

If you don't have seasons, you can use the 1.38 version, but if you have seasons I suggest you update to the seasons version.

EA inherited the concession stand drinks from the same glass object as bar drinks. So my drunk mod treated them as booze and you could get drunk form coco

The Seasons update fixes this.

Note: There are two files in the zip, ani_GetDrunk and ani_GetDrunk_Shorter. The shorter file's moodlet values are buzzed 3h, tipsy 6h, drunk/hangover 12h. Use only one of these.

Bugs: The custom moodlets are still not saved when you exit and return to the game. Almost have it working, so hopefully by seasons it's fixed.

Same mod as before but now you also get drunk from drinking nectar. I did this change because the ATS alcohol bottles are cloned from nectar, so now you can get drunk from them.

Note: Only use one version. If you download this, remove the older one from your mods folder.

- updated for SHT
- hang-over moodlet is now custom as well.

Bugs:
- Custom moodlets are not saved when restarting the game. Basically if you have a drunk moodlet, save exit, and re-load the game, the moodlet is not there.

Next version
- I want to find a better image for the hang-over moodlet. I know which one I want to use, but I couldn't find it-

1. I cleaned up the description below, it was too long and talking about things no longer valid in the mod.
2. Please note this is still experimental, I've tested this in my test hood and I've used it in my main hood, but I've not played excessivly with it since I did the custom moodlets.
3. I'll keep the old version of this mod up, until SHT comes out. Then hopefully all bugs in the new ones have been fixed.

This pretty much summons it up. Now, the mod works as follow. From the first drink you get buzzed, from the second tipsy, from the third drunk. When the drunk moodlet runs out, you get the hang-over moodlet which is nauceas from juice. 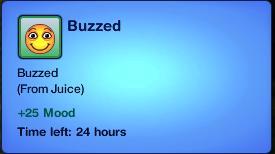 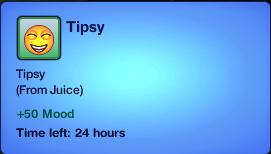 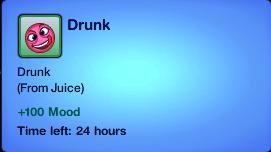 The buzzed, tipsy and drunk moodlets are custom, but I used already in the game exisitng moodlet images. The nauseas moodlet is the normal in-game moodlet, not custom.

Modding the mod:
You will need to open the mod up with S3PE.

Special thanks to Twallan for answering my question about custom moodlets.
Also for his mods, that I studied to figure out how do custom moodlets work.
The code to reading the moodlet xml is copypaste code from Twallan's woohooer mod, so thank you for that also.
And of course to JT` for giving the idea for the changes.

Bugs:
None to my knowledge, but I'm sure there are some.


Background
In TS2 one of my favorite mods was a six pack of beer that you could get from your fridge, drink it and get drunk. Drunk meant you did one random interaction after that, running around naked was my favorite

For the lack of creative powers of my own, I give you a ripped off version of that mod.

How It Works
This mod listenst to the EventTypeId.kHadADrink and when it is triggered, my custom code for making Sims drunk, will appear.

Random Interaction done to others
For this I use an in game method that returns all possible interactions for the Sim who's drunk to the Sim who's randomly chosen. So this can be anything from innocent chatting, to flirting with your best friend's spouse to fighting. It's random.

Random Interactions done to yourself
- Sing: They will use the WA sing animations, but sing the song from the shower, it doesn't always sync up well, but what drunk singing does?
- Pass Out
- Wet Self
- Get Naked (or if already naked, choose a random outfit)
- Talk to Self
- Bad Buzz (the animations from getting electrocuted)
- Cry
- Drunk Hysteria (a collection of three or four laughing animations). This is the only interaction I'm not happy with so I'll most likely change it to something different when I update this mod.

Additional Credits:
- For all the people who created the tools I used, s3pe, s3oc...
- For Kolipoki and his object modding tutorial
- jazzem for testing, thank you tons, it was of great help to me
- Darkpool/Lostaccount for her scrip modding tutorial
- Twallan for answering my question about custom moodlets.

See: Game Help:TS3 CC Basicswiki for a full guide!
Back to download view
336 Comments / Replies (Who?)