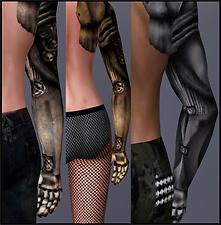 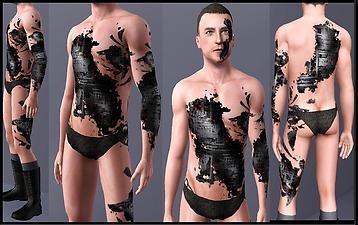 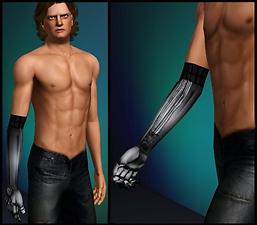 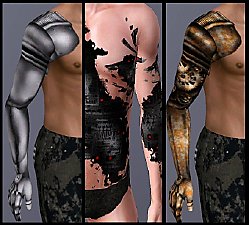 Created by Arisuka
View all Downloads
Uploaded: 17th Aug 2010 at 2:59 AM
Updated: 30th Mar 2011 at 3:54 PM - Added a left version
I love drawing different kind of prosthetic limbs after I watched Full metal alchemist . And many months ago I just randomly started sketching one out for TS3 for fun. And now, after many obstacles along the way, they are finally DONE!! ;___;
This is totally custom design and hand painted by me, apart from the shapes of the clockwork pieces of steampunk arm, which were made with the help of brushes.

Does your space traveler need to look a bit cooler, edgier?
He needs to lose a limb. And with this prosthetic iron arm, losing limbs has never been more fun and cooler!
The sleek one looks like the parts could move smoothly, and it's fitted for the shape of the body.

Is your inventor sim a bit dangerous to him/herself? Why not to have them lose their arm and replace it with this self-assembled lookin' prosthetic arm!
I wanted the steampunk arm to feel homemade, a bit ramshackle. And like it takes a bit of an effort to move it, with odd creaking sounds. It also has a random wiring detail on the lower inner part, like it's been fixed and tuned on many occasions.

Have your Skywalkers been lightsabering (Lukeiamyour)father to son again?
Yeah Luke could finally join the Dark Side to end it all, but instead, why not to give them these arms so they can fight to the eternity!

This half-arm prosthesis is positioned so that it looks like the arm have been amputated/lightsaber slashed. It's modern, but a bit tuned with the wires and led lights on the wrist area.

The skin detail was a random idea, and I wanted to make it look like it's been under an acid attack. It has random circuits, led lights and wires (=all the good stuff!) showing under the burnt/melt areas.

See the pics to see all the details I put so much effort into, and see how versatile these really are!
Angsty jedis, war veterans, accident inclined inventors, space travelers, cyborgs..

THESE WILL APPEAR AS TOTALLY BLACK IN CAS (because apparently I accidentally did something odd with preset CAS colors) BUT ALL YOU NEED TO DO, IS TO USE THE CREATE-A-STYLE TOOL AS YOU WOULD WITH ANY OTHER PIECE OF CLOTHING. It's not a bug, it's not a glitch, it's just my bad.

Skywalker's hair by Peggyzone (free), converted by Anubis360
The skins are also from Peggyzone (free).
Hat is from Rose (free).
Red head's hair by Annihilation
Faux hawk hair converted from TS2 by Aikea Guinea
The shorts are by Rustynail.
ALL other CC is by me, can be found in my downloads section.

The clockwork brushes used in Steampunk arm by IntergalacticHussy .

Additional Credits:
Thanks to all who gave me great advice on how to improve the textures!
This is a Maxis Recolour which means that it is a recolour of an item that already exists in your game. Please check the Pack requirements to see which game pack it recolours.
Files Need help with downloading or installing content? Click here!

If you need more info, see:
Recolours of this mesh
There are 1 recolours of this mesh on MTS:
Morrigan(Dragon Age)
by Slipknot=:)
Also Thanked - Users who thanked this download also thanked:
Layerable Piercing Set
by Winry
Tattoo Set - Puddydracovirgin - UPDATED - Mix & Match
by robokitty
future foe scenarios - multiple facial piercings for males and females
by aikea guinea
The Meaning of Trash: A Set of 6 Shredded Stockings - UNISEX now available
by robokitty
Hey! Listen! It's Navi!
by Anubis360
Medieval Sword & Shield
by Anubis360
Left4Dead Tattoo Sleeves
by newone08
Double Dragon Tattoos - Mix & Match/ Chestpiece & Backpiece
by robokitty
Color Tattoos For Females
by XJonasX
Matrix-ish Sunglasses for Men and Women, Teen to Elder
by Esmeralda
Packs Needed
None, this is Sims 3 base game compatible!
Other Information
Accessory Type: