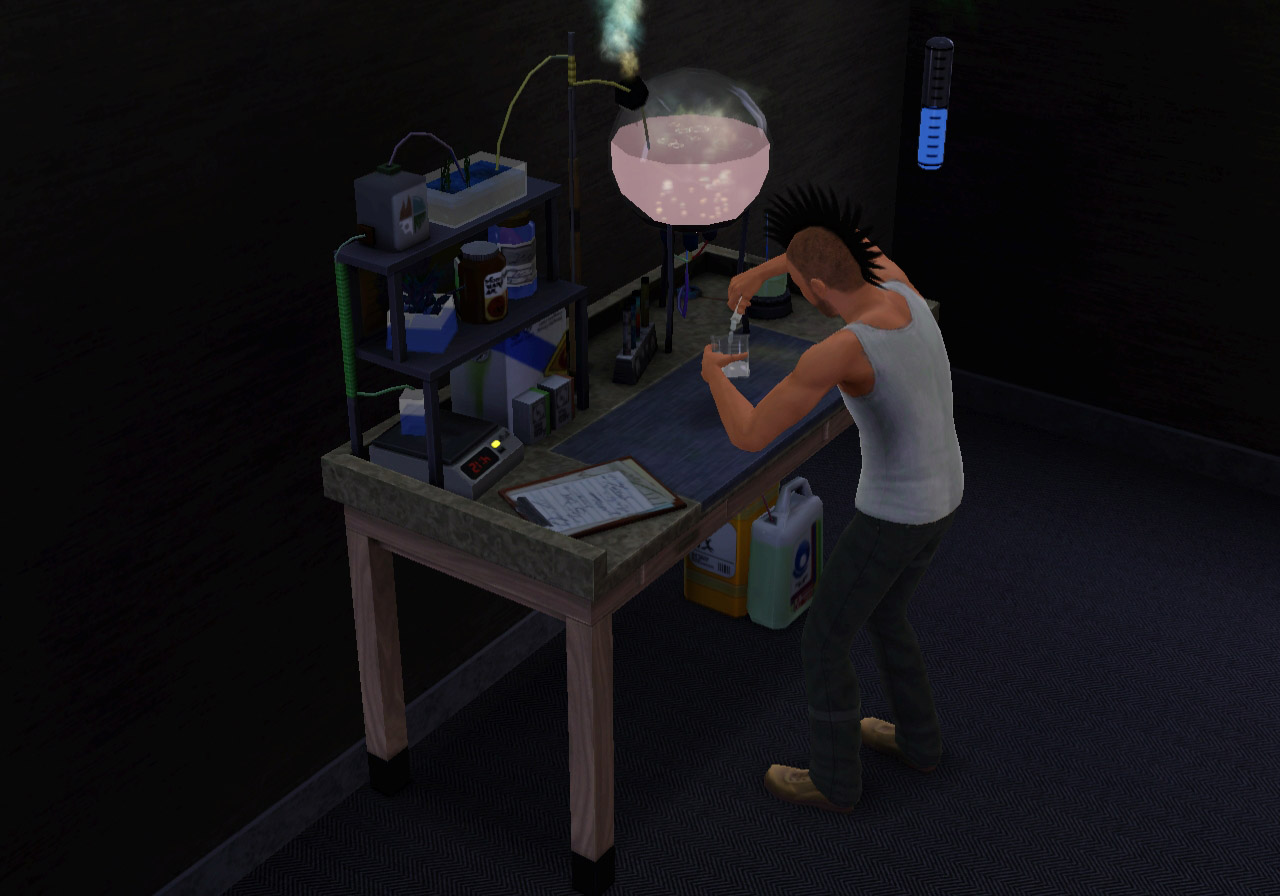 Created by melchi View Policy / About Me View Downloads Home

Description
The purpose of this pure scripting mod is to fix an issue with the Chemistry Lab Station object introduced with the Generations expansion. I can't really recall when it began, but I noticed in my games that every time my Sims use the Chemistry Lab object a new Career outfit is added. This problem persists as of patch 1.55. From what I can tell, the intended behavior is for the lab coat outfit to be temporary and removed from your Sim once the interactions end either by successful completion, cancellation or an amusing explosion. Hopefully, the need for this mod will go away if EA ever gets around to fixing the object.

What is changed?
This is a pure scripting mod that overrides the default "Discover Potion" and "Make Potion" interactions with the Chemistry Lab Station object to fix this outfit accumulation issue. Specifically, the mod replaces the Sims3.Gameplay.Objects.HobbiesSkills.ChemistryLab.DiscoverPotion and Sims3.Gameplay.Objects.HobbiesSkills.ChemistryLab.MakePotion interactions with my fixed re-implementations upon load. While I was at it, I went ahead and included an additional Tunable variable to toggle the outfit swap as I assume some people would rather not have an outfit swap in the first place. The OutfitFix version of the mod uses the fixed interactions with the default swap behavior and the OutfitNoSwap, as one might expect, is the same with the swap disabled via the XML tuning variable I added.

Installation
Just put one of the two package files (OutfitFix or OutfitNoSwap) into the mods folder. The interaction changes should be applied seamlessly.

Compatibility
I have only been able to test this mod on patch 1.50 and 1.55, but it may work on earlier versions as well depending on when the last time they updated the Chemistry Lab object. My testing environment includes all expansion packs up through University Life and the High-End Loft Stuff Pack. However, only Generations should be required since that is I believe that is the expansion that actually added the Chemistry Lab object.

Potential Conflicts
Any mod that changes or depends on the default "Discover Potion" or "Make Potion" will likely cause issues. Though the game shouldn't crash, the changes this mod makes may be overridden by the other mod or vice versa depending on load order. XML Tuning mods should be compatible as the Tunable values are copied over to my interaction re-implementations, however I have not verified this. The XML tuning mod would need to be applied first though in order for this mod to copy Tunable values.

Removal
As with any scripting mod that adds new interactions, you should make sure none of your Sims are interacting with any Chemistry Labs before removal.

Additional Credits:
Special thanks to Buzzler's Excavation Site Hotfix for the inspiration and example of how to extend an EA interaction. Also thanks for the various tutorials found on this site for how to create scripting mods in the first place.


Only one of the mod versions should be downloaded and installed in your game at a time. Both override the same functionality and would conflict with each other.