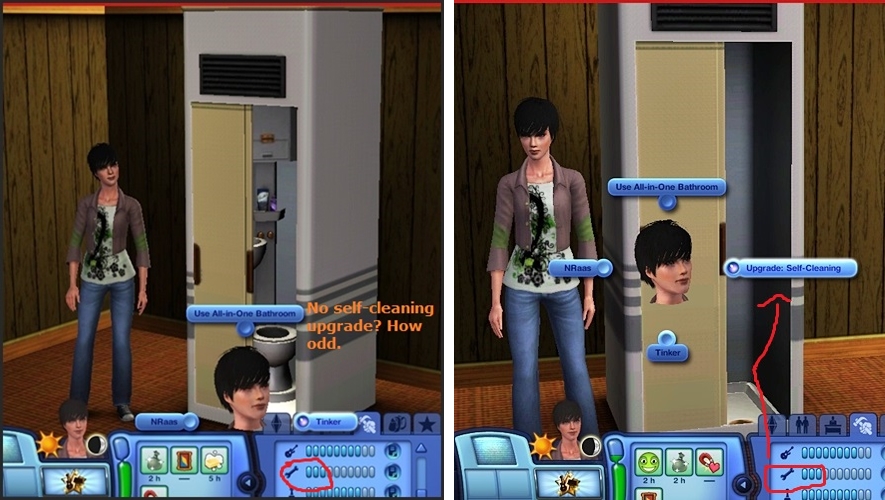 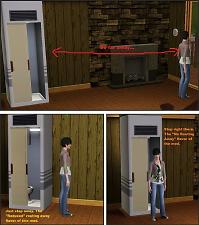 Created by othiym28
View all Downloads
Uploaded: 2nd May 2014 at 2:31 PM
Updated: 24th Jun 2014 at 9:42 AM
Edit 6/24/14: New flavors of this mod available. In order not to conflict with sibble's mod for Faster Upgrade times , I've added a version of this mod that includes the reduced upgrade times for the All-in-One, and he's going to make a version of his mod that's safe to use with this one. The rar files for this flavor of the mod are separated based on how far you want your sims to route away from the All-in-One; download only one of these. The package files within the rar files fix the All-in-One in every way described below, but also change the upgrade times for both Self-Cleaning and Unbreakable to either 30 minutes, 1 hour, 2 hours or 3 hours. Only use one package file from this mod. As always, feel free to ask about anything here that's unclear to you.

The All-in-One bathroom is very close to being a perfect item; the efficiency of time and space is great for larger and busier sim families. Still, there are a few features of the All-in-One that I thought could do with some tweaking, to bring it more in line with the rest of the game's higher-end plumbing items. Once again, my fumbling around in S3PE resulted in a tuning mod that I hope will be useful to a lot of you.

The first change is the rate at which the All-in-One gets dirty. Unmodded, it's on par with the cheapest toilet and shower in the game, and needs cleaning fairly often (after every 5 uses, assuming the sim has no modifying traits). For the money your sims are spending on this item, it should be more like the other expensive plumbing. This mod reduces how dirty the All-in-One gets on a per-use basis. Without either of the modifying traits of Neat or Slob, your sims can use the All-in-One 8 times before it needs cleaning.

Don't want to be bothered with cleaning it at all? Neither do I. But for some arbitrary reason, upgrading the All-in-One bathroom to self-cleaning requires a Handiness skill of 8. Fixed that too; this mod reduces the skill needed to Handiness 3, just like every other self-cleaning upgrade in the game.

Finally, I noticed that sims wander quite far away as soon as they step out of the All-in-One. It's an attempt to avoid routing issues around the item, but it's a long walk, and sims usually don't need to move that far. The different flavors of this mod deal with this: there's a Full Route Away mod that doesn't change the distance your sims will walk when they step out of the object, a second option that reduces the distance, and a third that stops the sim from walking away altogether. 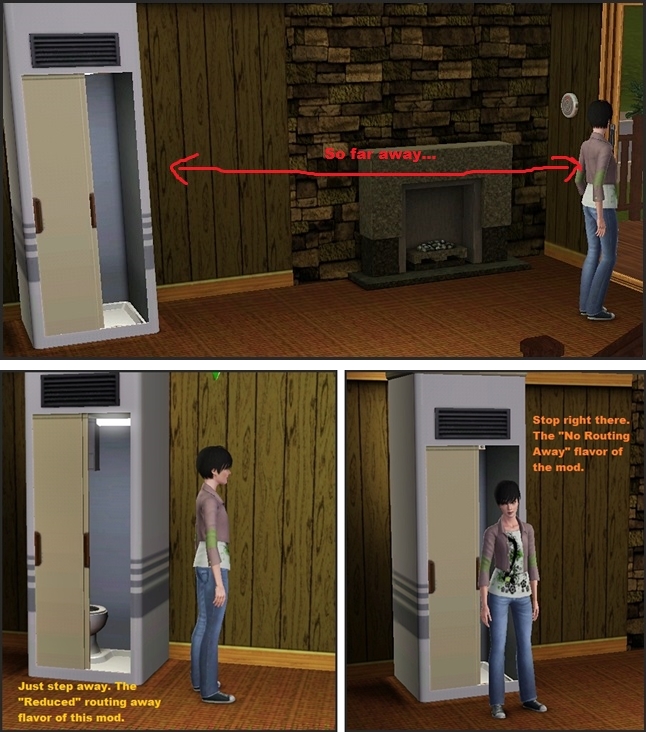 Use only one of these versions. If you tend to keep the All-in-Ones on houseboats or queue several sims at a time to use the same one, it's probably a good idea to use one of the versions that allows the sim to route away at the end of the interaction. Also, consider your playstyle before choosing a flavor: if you usually micromanage your sims and have a morning or evening routine for them, the No Routing version will most likely make your routine more efficient; if you generally let your sims fend for themselves, you'll want a version that routes them away from the All-in-One, just so they move in case another sim needs it.


Known Issue: With the "NoRouteAway" flavor of this mod. Possibility of sims having routing failure tantrums if the All-in-One is placed in the back right corner of a room. See the first page of comments on this mod for explanation and advice.

This tuning mod alters the AllinOneBathroom_0x8dfc35aab5ea6272 XML and the UpgradeSelfCleaning_AllinOneBathroom ITUN, and will conflict with any other mods that alter those files.

This mod was created with patch 1.67, and it requires at least one SP/EP that includes an All-in-One bathroom: Island Paradise, Movie Stuff, Into the Future.

Only download one of the flavors of this mod. See the overview of this mod to decide which one is right for you.