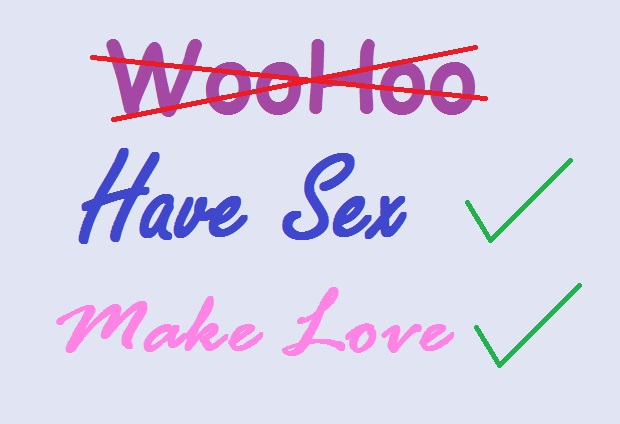 10/30/2014 - This mod has been updated for the 1.0.797.20 patch, although future updates to this mod will (hopefully) not be necessary, due to using a new method of string replacement packages.

Tl;dr - This mod changes The Sims 4 UI so that all instances of "WooHoo" are replaced with "Make Love" in one version, "Have Sex" in the other version.

Who Cares?
I do! Our Sims have a different word for sex (although I've never actually heard a sim say "WooHoo"). But given that everything in the meta-game/user interface is presented in our native languages, it does not make sense that sex is referred to as "WooHoo" on our end!

EA probably just wanted to keep the uptight critics off their case, understandably I guess...This game is already incredibly sexually suggestive, calling it what it is shouldn't invite any scrutiny...The fact remains that Sims engage in sexual intercourse with each other. We don't need to go into specifics, that's what imagination (and adult mods) are for!

I have taken care in ensuring the replacements are grammatically and syntactically correct. Replacements include "Make Love", "Made Love", "Lovemaking", "Have Sex", "Had Sex", "Having Sex", "Sexting" and of course, "Sex".

This is a simple package installation, simply drop the file in your Sims 4 Mods Folder.

Requests? Other Languages?
I am glad to hear the positive feedback for this mod and it has inspired me to expand upon it further!
If you are fluent in another language that is supported by The Sims 4 and you would like this mod to be translated, I will credit you in this mod if you PM me and provide me with the most common and neutral way of saying the following in your language:
Have Sex or Make Love
Having Sex or Making Love
Had Sex or Made Love
Sex or Lovemaking
Sext (Sending a sexually suggestive SMS)

Thanks to c_major for his "The Game Text Editor for The Sims 4 - TS4 STBL Editor" utility for allowing me to easily make changes in the game strings.

Thanks to DrChillgood and jtravers88 for revealing how to make individual STBL entries. Also, Morphar for linking me to their thread.
Other Information