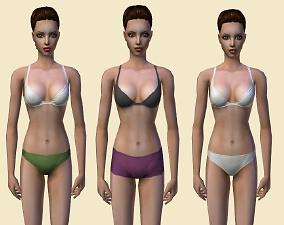 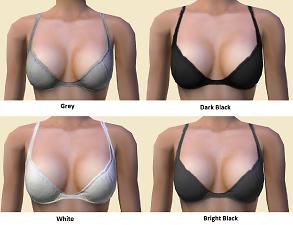 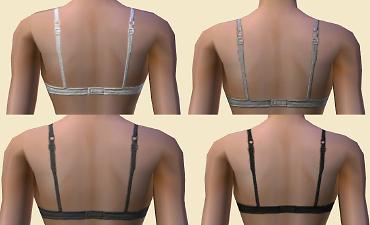 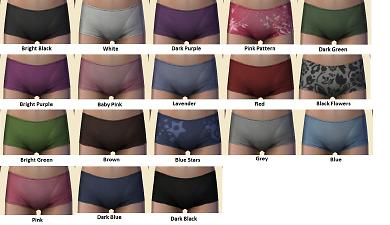 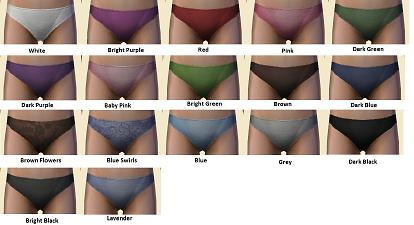 Created by gummilutt
View Policy / About Me View all Downloads
Uploaded: 7th Dec 2014 at 5:40 AM
Updated: 24th May 2015 at 12:26 PM
A few days ago, a thread discussing CC one wish would exist was created. It made me realize one of the things I miss in my game is more realistic underwear. A lot of the underwear out there is much too fancy for my taste, both in terms of textures and shape. I like my Simmies to be comfortable! I also like a degree of realism in my game, and I certainly don't match my underwear every day, so it feels weird that my Sims appear to do so.

I've always loved HystericalParoxysm's set called Fanseefem, with basic underwear and swimwear. Inspired by the thread, I decided to mismatch some of the textures and create the underwear my game longs for.

I didn't quite expect it to get quite so out of hand, but I wanted everything and couldn't figure out how to pick which colors to match, so in the end I decided to just do every combination possible. I also decided to borrow a few swimwear-textures as I thought they were fitting as underwear as well.

Because of the massiveness of this project, I've decided to release it in parts. This first set is the black and white edition, and it includes four different colors of bra (white, grey, dark black, bright black). The original underwear did not include a white, and the black was very dark, so I borrowed the white and black from swimwear and made them into underwear. These are paired with 17 different briefs, and 18 different boyshorts.

There are 33 recolors for each bra, except white and bright black which have 35, as there are mono-colored versions included as well. This is because they weren't included in the original sets, and thus don't exist in mono-color. All in all, this set contains 136 recolors.

Now, this set is not really meant as a set where you use every single texture, so for your convenience I have made texture-swatches and labeled files accordingly, so that it is easy to pick and choose your favorites.

While it would have been nice to display every recolor in this thread, I'd be here until next year taking screenshots, so I've chosen to display each recolor in either briefs or boyshorts (except brown), to show you an example of what it looks like. There are also a few samples showing the recolors from behind. Hopefully these pictures and the texture-swatches are enough for you to get an idea of the other combinations included.

I hope you all like it! I had fun making it.

File info
- Available for AF and YA
- Categorized as underwear
- Townified (download un-townified version if you don't want this. Townified means that townies can spawn with these outfits)
- Shoe sound is barefoot
- Tooltip is file name, so that it is easy to figure out which file is which if you view them in Bodyshop

No mesh is required, but you may want to check out HystericalParoxysm's default replacement mesh that tidies up the maxis mesh a bit. See the original fanseefem-threads for more information on that (links above and below). All screenshots displayed in this thread were taken without the replacement mesh.

No EPs or SPs required.

Stay tuned for part 2, which will include more colorful bras.

Note about quality: The white and brighter black recolors are not quite as great as the rest, because I do not have HystericalParoxysm's skill, and don't know how to make a texture from scratch. I extracted the color used in the corresponding swimwear looks, and covered the texture. The details come from the bump map. I'm happy with the result, but I wanted to mention it so that you know what you are getting.

Credits
- HystericalParoxysm for creating the textures used in this project. She did all the hard work, I just swapped it around a bit. So make sure you check out the original fanseefem set (Underwear and swimwear) as it is fabulous!

Thanks
- HystericalParoxysm for the generous policy allowing me to re-use the textures in this project
- Sweet Cats for creating the thread that made me think of this project
- VioletPadfood who taught me how to do this kind of thing, once upon a time

Model content: Hair Skintone
This is a Maxis Recolour which means that it is a recolour of an item that already exists in your game. Please check the Pack requirements to see which game pack it recolours.
Files Need help with downloading or installing content? Click here!