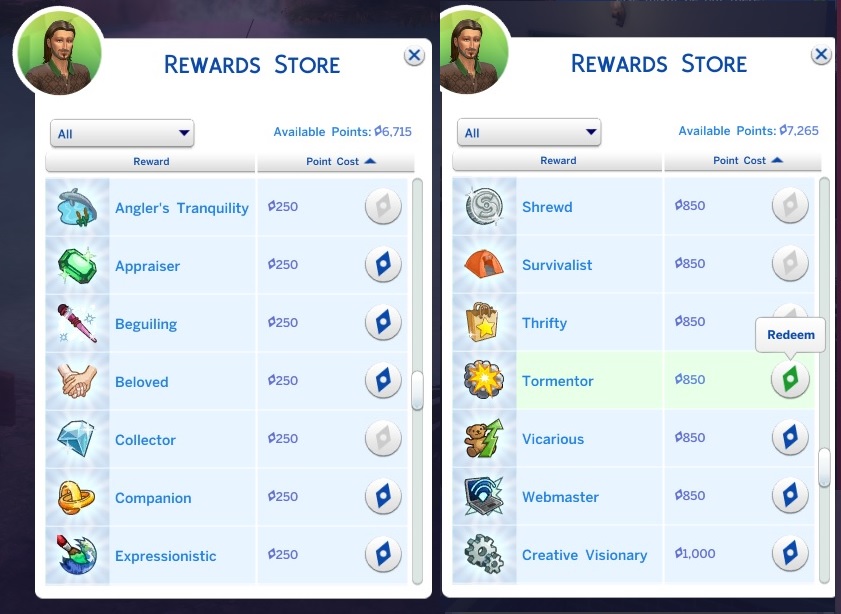 A new mod flavor is added which has all of the original prices on the traits and potions as EA has set them, as has been asked about in the comments. The Aspiration Traits added into the store by this mod have been set at 1700 in cost, as suggested by Frimlin.

The cost of purchasing all of the traits is reduced in the same fashion as in my Cheap Aspiration Rewards mods, the cheap flavour and the half-cost flavour; so all of the default traits/rewards have the same cost as in those mods.

The price point for the new traits is 250 in the cheap mod and 850 in the half-cost mod. I've simply chosen a price in both mods which hasn't been used previously, such that these new traits will be grouped together. Use only one of these three mods at any given time.

These mods here can also be used by those who have Outdoor Retreat installed, separate versions aren't necessary.

Anyone using one of my Cheap Aspiration Rewards mods needs to remove it when using one of the mods here, as those mods use the exact same file as these ones, the XML file called:
whims.whims_tracker_03B33DDF_00000000_CEE9A466EBFC13D1.xml
Also the mod with Eternal and Immortal New Custom Reward Traits uses this file and will not work together with my mods here.