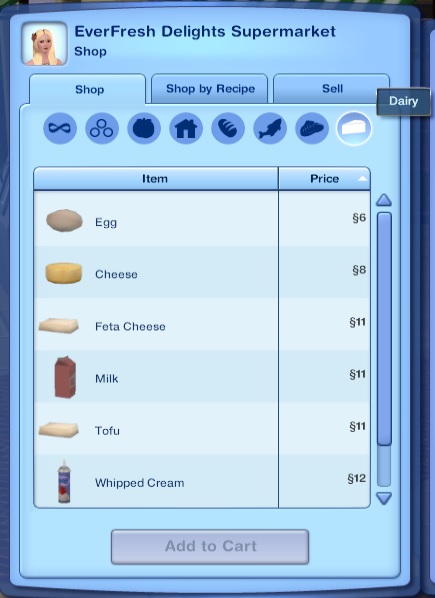 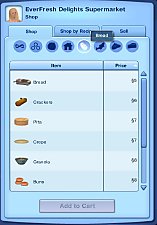 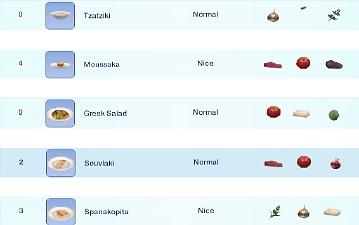 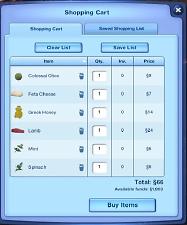 nectaringredients.jpg - width=411 height=165
More ingredients can be added to the nectar maker

Created by Cinderellimouse View Policy / About Me View Downloads Home

Uploaded a new version of Cinderellimod_GreekRecipesPlantsIngredients_Light.package which fixes an issue. Please re-download if you are using this 'Light' version.

Thanks to Icemunmun for the heads-up.
Thanks to igazor and J4K for help and for providing the fixed version.

Beware the Ides of March: Cinderelli is updating a mod! ^.^

* Fixed an incompatibility issue between the Overhaul and Greek mods. If you had the issue where the Greek items were not showing, this should be fixed.

* The missing recipe ingredients issue has also been fixed.

The wonderful icarus_allsorts has provided a better way of allowing the nectar maker to accept any ingredients in the form of a script mod. There is now a separate file for this feature in the downloads section. You can use this mod on it's own or alongside the Overhaul and Greek mods, the three mods are compatible. However, the Overhaul mod adds nectar values added to all ingredients, so both files are recommended.

What this means is that the mod is much cleaner, and the game loads the mod in a more straightforward way. The Overhaul no longer requires douglasveiga's CCLoader but the Greek mod still does.

Look out for some sweet new treats available at the grocery store!

Woo! Three new versions of the Greek Recipes Plants and Ingredients mod are now available! I updated the mod to include more custom models (including a new olive oil ingredient and a new 'fixed' Greek honey!), so the mod uses less resources from the game files. This means I can now offer three flavours:

* Light Version - only requires the base game and World Adventures

* Store Version - requires the base game and World Adventures and also makes use of the extra ingredients that came with store premium content, specifically the cucumbers and eggplants [aubergine].

* Full Version - The same as the Store Version but also requires the Ingredients Overhaul and More Nectar Ingredients mod to be installed and the new ingredients are properly categorised using the new shopping tabs.

Remember you must only choose ONE of the Greek mods, and remember to remove the old version before installing a new one.

You may also need to delete your 'Thumbnails' folder from your Documents/Electronic Arts/The Sims 3 folder if you have problems getting the new models to show accurately in the UI (don't worry... it regenerates itself).

* Renamed and replaced the Overhaul and Nectar download file because it was downloading as a '.packa' instead of a '.zip'. If you were having trouble with this before, please download the new version 'Cinderellimod_Edited_CookingAndIngredientsOverhaul_NectarMod.zip'

This mod combines the awesome Cooking and Ingredients mod (originally by BlackCat007 and updated by anak_ponti) with two of my own mods: More Nectar Ingredients and Greek Recipes, Plants and Ingredients. When I released my mods, I received requests to make them compatible with the Overhaul mod. This was previously impossible for me because they were overriding the same resources. Fortunately, the wonderful douglasveiga has made a tool which allows players to add additional custom .xml plant/ingredient/recipe files! I was able to combine the three mods, improve my nectar mod, and also make the Greek Recipes, Plants and Ingredients mod available without overriding any game files (so no conflicts)! Anak_ponti has kindly given me permission to re-upload his version of the Overhaul mod. *smiley face*


So... What does this mod do exactly?

Everything it did before and more! I tried to maintain everything from anak_ponti's Cooking and Ingredients Overhaul (main version): http://modthesims.info/d/479345

* The grocery store still has the new produce tabs and I have added strings for the 'bread' and 'dairy' tabs.
* All the ingredients available with anak_ponti's version of the Overhaul mod are still available, such as: dragon fruit, cantaloupe, milk, spaghetti and more!
* The recipe and ingredient details are the same.
* The new and 'missing' plants are still available: dragon fruit, cantaloupe, zucchini, tofu, roast and links.
* 'Hidden' ingredients should now be available at the grocery store, including world specific ingredients and rare ingredients like the life fruit and cherries.


* I have re-categorised some of the ingredients, such as moving the shawarma roll (kebab meat) to 'meat', and the cheese wheel to 'dairy'.
* I have made more ingredients compatible with the nectar maker (everything excluding meat and fish) so simmers can be more creative with this feature. For example, you could add honey, cinnamon or lavender to your nectar recipes! Or even make vegetable based recipes like tomato juice! But be warned... you might find some nasty combinations available at the nectary, and might even get a few strange pancake flavours! But hey... if your mermaids want to drink kelp juice, who are we to argue?


* The Greek Recipes, Plants and Ingredients package is optional, and it will add the following things:

- Colossal Olive (the name is an in-joke *waves to Jim*)
- Greek Honey
- Feta Cheese
- Lamb
- Mint
- Spinach
- Elderflower (not particularly Greek but I really wanted it *^.^* )

Some of the ingredients simply use existing in-game resources (for example, the 'feta cheese' is based on the tofu). Others are new objects, cloned from original ingredients and re-coloured (such as the olives and mint).

The plants unlock at various points in game. Some are available at a low gardening skill, others are unlocked at higher skills. To plant the feta and lamb your sim must complete the in-game gardening opportunities that unlock the meat and cheese plants.

All five recipes require three ingredients, at least one of which will be a new custom ingredient. They unlock automatically as your sim’s cooking skill improves. Tzatziki which is a snack and only had a resource for a single serving, but all other recipes have both single and group servings. I mixed and matched the existing resources to try and get the preparation of the meals as logical as possible, so the sim will use the oven to make moussaka, for example. 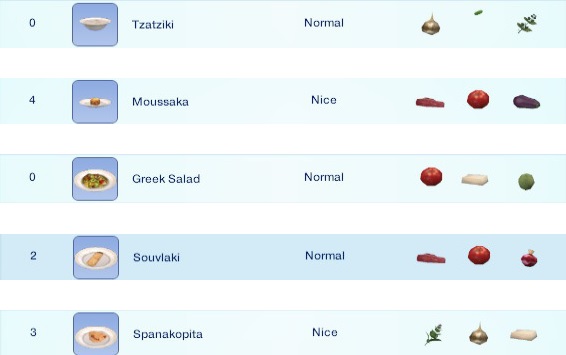 Why Greek recipes? I love Mediterranean food! Also, a lot of simmers were requesting a Greek inspired world in the official forums and I was planning on creating one. While I was playing around with custom ingredients it seems like a nice idea to be able to offer themed food and plants too.

The mod is likely to conflict with any other mod which uses the same files, so please check your mods folder carefully before installing.

I am currently working on uploading different flavours of the Overhaul mod. For now please assume it requires all the expansion packs. I will be looking at this in more detail and will have more information soon. Thank you for your patience.

I have tested this version of the mod on three separate 'The Sims 3' folders: a brand new one; my usual mod testing folder with a previously saved game; and my actual main game. I have been testing it with ErrorTrap with no issues (well... there were issues but I fixed them and haven't had any since). I have played with it extensively and tried my best to check out as many details as possible and everything seems fine as far as I can tell. If you do find issues, please do let me know in the comments section.

I have briefly looked at the files, and tested all the following mods in the game and all appear to be compatible with my Overhaul and Greek mods. Please be aware that some of these mods are continually updating.

BlackCat007 - The original creator of the Cooking And Ingredients Overhaul mod: http://modthesims.info/download.php?t=353351
anak_ponti - Who continued to maintain and update the mod, and who gave me permission to take over the maintenance: http://modthesims.info/d/479345
icarus_allsorts - For help with troubleshooting and providing the MakeNectarWithAnyIngredient script!
douglasveiga - For being amazingly helpful on numerous occasions! For going out of his way to help people. And for providing the CCLoader: http://modthesims.info/showthread.php?t=546986
Arsil and Zerbu - For also being very patient with me and sharing their superior knowledge!
Inge Jones and Simlogical - For the marvellous creation that is S3pe! http://simlogical.com/s3pe.htm
And all the wonderful people who take the time to write modding tutorials and run helpful websites like MTS because most of my modding knowledge comes from these sources.

Eeek... I hope that's everything! Please let me know in the comments if you have any issues or questions. And do let me know if you have suggestions for improvements, I'd love to hear them!

* Overhaul: for the Overhaul features download and install Cinderellimod_Edited_CookingAndIngredientsOverhaul.

* To use any ingredient to make nectar download and install icarusallsorts.MakeNectarWithAnyIngredient

* For the new Greek plants, recipes and ingredients download install ONE of the Cinderellimod_GreekRecipesPlantsIngredients files. AND douglasveiga's CCLoader. The 'Light' and 'Store' versions of the Greek mod can be installed on their own, or alongside the overhaul mod. Only the 'Full' version of the Greek mod requires the Overhaul mod to be installed as well because it makes use of its features.

All the mods compliment one another, and all three are recommended for the most fun! However, you can use them all individually if you want to pick and choose (except for the 'Full' version of the Greek mod which requires the Overhaul mod) Happy simming! :D