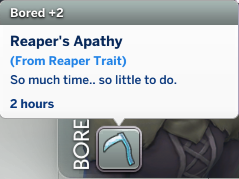 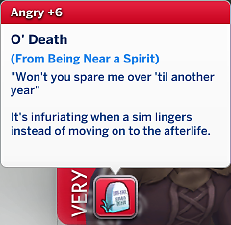 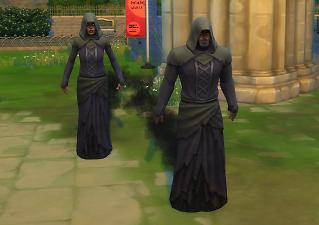 Added an additional flavor of the trait and buffed Reaper's Apathy to actually be more of a nuisance.

Use only one version of the trait.

Reaper (Updated): Is the updated version of the trait. Reaper's Apathy will occur more often and also had it's emotional intensity increased. Be warned townies can be assigned this trait so you might see some randomly generated reapers.
Reaper (Hidden): Is a very quick and dirty fix for those who want only a few select sims with the trait and not a whole town. It requires the use of Clown's mod located here >http://modthesims.info/download.php?t=532735

I am actively working on a version of the trait that is a selectable lifetime reward however I'm uncertain how long it will take.

Reapers.. they know when your number is up.

These sims are quite similar to their patron, Death.

Originally I wanted the grim reaper to join one of my households but when I learned he couldn't woohoo/date/kiss without losing his special effects I was heart broken. I decided to take matters into my own hands and create a trait that emulates some of his behaviors.

Currently this trait applies the following effects to sims.

I added some additional moodlets to the trait for some flavor as well.
Angry when in the presence of a ghost. (Why. Won't. You. Move. On.)
Randomly becoming bored. (Being immortal has got to be such a drag)

I did not add any skill/career multipliers as the trait is insanely overpowered in the long run.

Please feel free to leave any feedback in the comments! I'd love to hear what ya'll think!