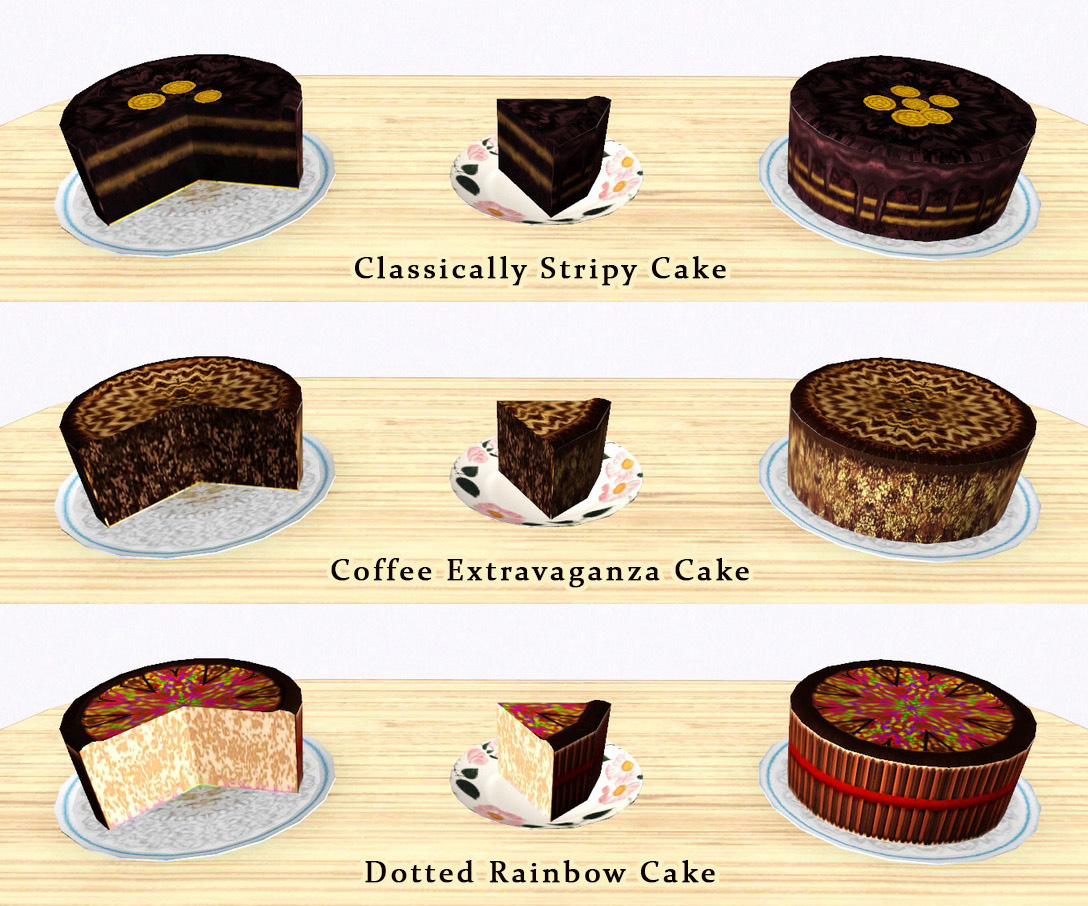 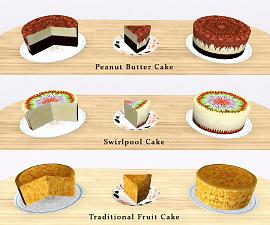 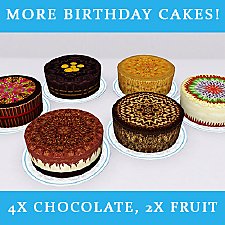 I have uploaded a variant of the cakes that function as regular group meals. They can be used alongside the others that function like birthday cakes.
The descriptions and prices are the same as the birthday cakes, but you will find the non-birthday cakes under Kitchen \ Small Appliances or Misc Appliances.
One thing I have to mention is that the slices will have the same texture as whatever cake you have as a default.
These versions require zoeoe’s Non-Birthday Cakes mod to work! (only the "zoeoe_Non-Birthday_BirthdayCake.package" file)

Edit: replaced the thumbnail because the animated one didn't work.

Things were getting kind of boring with the same ol' colorful birthday cake that looks like tasteless cardboard. A while ago I went looking for cake replacements and found a few absolutely gorgeous ones, but unfortunately none of them were chocolate! I don't know about you, but most of the birthday cakes I've seen are mostly chocolate and peanuts. So I made a few new cakes: four of them are chocolate, while two are fruit-based.

3. Dotted Rainbow Cake
The Dotted Rainbow Cake is your answer to everyone at the party requesting something different. Skittles? Plenty! Almonds and hazelnuts? Right here! Raisins in chocolate? Gotcha covered! Comes with a complimentary edible red ribbon.

4. Peanut Butter Cake
If you're in the mood to spoil yourself, this decadent dessert is just the solution. A soft, chocolatey sponge base continued with a delicious body of vanilla-flavored creaminess - and all of that topped with a creamy peanut butter-flavored syrup with chocolate bits and peanuts sprinkled all around.

5. Swirlpool Cake
For those who desire a healthy-looking cake for their celebration, the famed pâtissier Pompousse wholeheartedly recommends his hit creation, the Swirlpool Cake. Rumor has it that it was created because the chef ran out of chocolate, but this has yet to be confirmed.

6. Traditional Fruit Cake
No celebration is complete without the Traditional Fruit Cake! Wait...why is it traditional again? And are those even fruit? Who cares, it's a cake.
(The fruit cake is in there mostly as an after-thought; I've never seen anyone on Reddit who actually likes fruit cakes, so this is a subtle way to torture your simmies XD Too bad they won't actually be able to tell the difference!)

Each archive features a default replacement (DR) and a non-default replacement (NDR) version of the respective cake.
The DR versions replace both the cake and slices, while the NDR ones add a new cake only (slices will show the textures from the default cake).
You can have all NDR versions of the cake in your game at the same time.
You can have only one DR version of only one cake in your game at one time.

You can mix and match: one DR version + all other NDR versions at the same time. (Including the NDR version of the DR one! - which will just be a separate cake and waste space, but hey, if it's your thing go for it.)
If you have one of these cakes as a DR, the slices from all the other NDR cakes will default to the slice of the DR one. Like in the example below, using the DR Traditional Fruit Cake and the NDR Peanut Butter Cake: See: Game Help:TS3 CC Basicswiki for a full guide!
Back to download view
27 Comments / Replies (Who?)