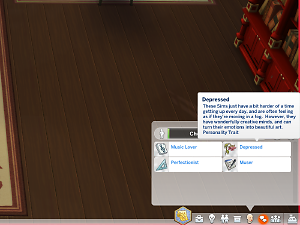 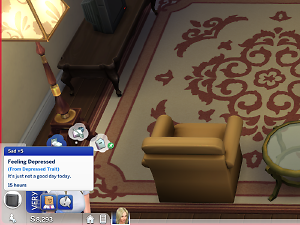 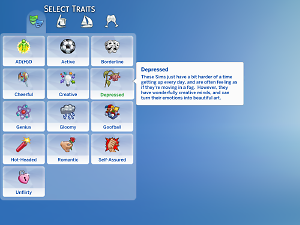 This trait should now work with the Pets expansion / patch. Please let me know if it does not.

Thank you emile20 for showing me the tutorial to update this!

Russian translation now available! A massive thank you to Liu59 for their hard work in creating this!

Playing "Gloomy" Sims, to me, never felt like the trait had a big enough impact on my Sims' lives. Sure, they were sad once and a while--but they moved on, and life was still a happy world for them. I wanted something that made my Sims' lives harder, more realistic; using personal experience, I've created a "Depressed" trait that, after much testing, is far more effective than its sister, "Gloomy".

The Basics
The base trait holds a hidden buff that affects many aspects of the Sim's life.
The Negative Buffs
Feeling Depressed
The primary visible buff is known as "Feeling Depressed", has a 65% chance of "popping", and lasts for 22 Sim hours. It has a habit of double-ticking back to back, with a +5 to sadness. But not to worry! There are positive buffs included to help counter such a strong sadness that I'll talk about soon.

Sims around a Sim with this buff have a chance to receive a proximity debuff called the "Debbie Downer". It is an hour long--Sim time--debuff that gives the receiver a +1 to sadness, sharing in the moodiness of the depressed Sim.

Feeling Awkward
The secondary negative buff is called "Feeling Awkward". It is a two Sim hour long debuff with a +2 to uncomfortable. It has a 70% chance to "pop" when the Sim is around an angry, bored, confident, embarrassed, energized, flirty, playful, sad, tense, or likewise uncomfortable Sim.

Sims around a Sim with this buff have a chance to receive a proximity debuff called the "Awkward Annie", as they feed off the obvious emotion of their depressed Sim. Like the former, it lasts only for one Sim hour and gives a +1 weight to the embarrassed emotion.

Feeling Drained
This debuff triggers after the below positive buffs time out. As with any upswing, the crash that follows can be harsh and unforgiving. The desire to sleep becomes strong, and a Sim on a crash will receive a +3 to the tense emotion for six hours.

The Positive Buffs
Being depressed does, in fact, still have a few good upswings. And while they don't affect skill gain and needs too much beyond more than just evening it out to a normal, functioning level, it does make it just that much easier to counter that long sadness debuff.

Feeling Happy
The second buff is a simple +2 to the happy emotion for three hours. There's a silver lining to some clouds, and this buff allows that Sim to see it--even if only for a short time. As this is a harder emotion to feel, "Feeling Happy" only ticks 15% of the time.

Feeling Inspired
Depressed Sims can create some of the most beautiful of art when their sadness blossoms into a physical manifestation. This six hour buff adds a +3 to inspired, helping the Sim to channel their creativity to become better at their hidden talents blanketed by their sadness. "Feeling Inspired" has a 30% chance to spawn at any given time.

Known Bugs
I've played this emotion thoroughly through several full lifespans and, with some tweaks here and there, have gotten it to a point I've not noticed any current errors in active gameplay.

This trait CAN take some time to manifest, especially at the start of a new game--maybe about one or two Sim days.

For some inexplicable reason the animation set to this emotion upon selecting it in CAS plays the "Active" animation. I have spent countless hours editing XML and .package files only to be met with no movement to a better animation--if anyone has any suggestions, I'm 100% open to it.

Conflicts
This is a new trait, so it does not override the "Gloomy" trait at all. With it being a new package, it shouldn't conflict with any other mods, especially since I didn't edit any pre-existing XML files to make this. I have not tested it in conjunction with any other custom trait, so please let me know if something pops up in your game.

Enjoy!
--And a massive shoutout to Zerbu and his Mod Constructor.