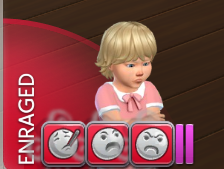 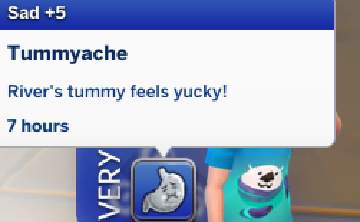 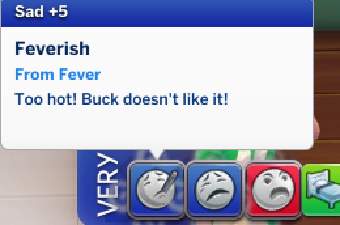 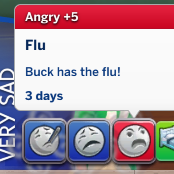 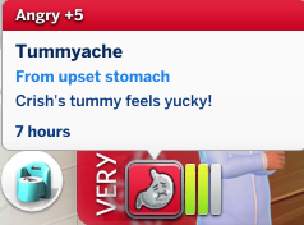 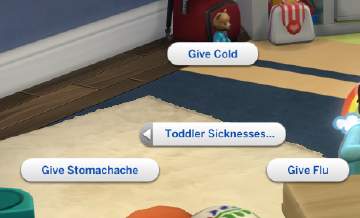 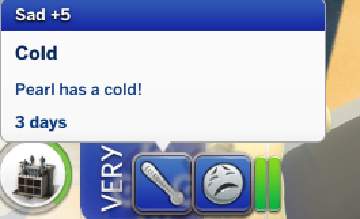 288 Thanks  Thanks     107 Favourited
**UPDATE** Updated Symptoms Stack for patch 1.66
NOTE: I have plans to overhaul this mod with a cleaner system & its own script. It's coming along nicely, so please look forward to it.

Toddlers are pretty gross in real life, no doubt about it. So why does the Sims 4 restrict toddler illnesses to just playful giggling? This mod aims to change that by allowing toddlers to become sick and infect older sims and each other.

Getting a toddler sick is pretty easy: similar to KawaiiStacie's Slice of Life mod, toddlers will get sick the same way older sims can: poor hygiene, eating too much food, eating bad food, other sick sims*, the weather, or just because, with similar requirements so it's not too foreign for SOL users. There is, however, an extra way I made for testing and cheating: a pie menu for selected toddlers that will make toddlers sick instantly with a Cold, Flu, or Stomachache. This pie menu, along with the rest of the mod**, requires Scumbumbo's XML Injector v2 to appear (look in the comments of XML Injector's post for a 1.55 update :D).

So my toddler is sick, now what?: Sick toddlers are given a broadcaster that can spread to other sims (only other toddlers if you do not have SOL or GTW installed), there are different broadcasters depending on if they have the flu (older sims get Llama Flu in GTW version) or a cold (older sims get Triple Threat in GTW version). How toddlers feel about their illness symptoms depends on their trait, most will be sad, but Wild, Fussy, and Independent will become angry from their symptoms instead. Stomachaches are not contagious, but they might be in the future in the form of a Stomach Flu (this will be linked to Burning Belly in GTW version). Another bonus you get from owning GTW is the addition of sickness overlays attached to the sicknesses (see Recommendations for the Default I use!)

So what's this "symptoms stacking" business?: This is an optional package that allows GTW symptoms experienced by older sims to co-exist at the same time; this is only included because toddlers are able to experience stacked symptoms (because they are new buffs) and it felt unfair not to include it for older sims.

*- other toddlers, particularly; older sims can only infect toddlers if SOL's package is modified, which I cannot do without permission; as for the GTW package, there is the issue of compatibility with Nies's Cooler Sicknesses, so I left the GTW xmls alone for now
**-This mod, as of version 1.5, now uses xml injector version 2 for a new purpose: better control of toddler illnesses; now they have a hidden buff (it stores all the random events of toddlers becoming sick; it doesn't do much else, but if you cheat you'll find Toddler Sicknesses in the moodlet list) that xml injector adds to the toddler trait (this means, I did not touch the trait itself at all, which means no conflicts :D

With the "what's what" out of the way, here are the less fun but still important details.


You only need one of these files. Take your pick whichever is best for you!