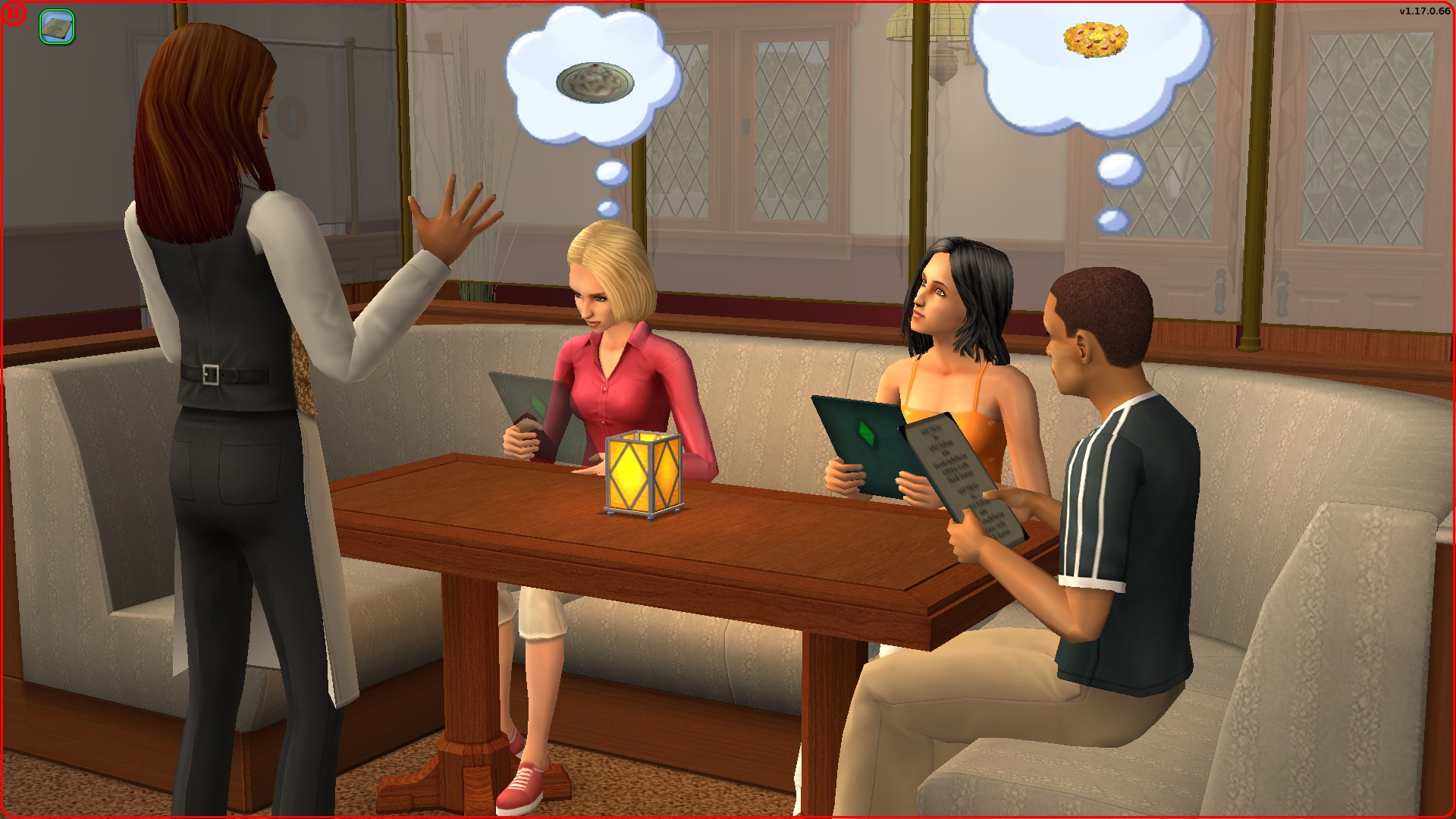 Created by simler90
View Policy / About Me View all Downloads
Uploaded: 14th Sep 2019 at 6:04 PM
Updated: 27th Sep 2022 at 5:20 AM
Dining Group Mod: In an unmodded game, when a sim autonomously initiates the Be Seated interaction on a dining podium, the game checks to see if the sim is unselectable, if so the game then looks for other sims who are also waiting in queue to be seated, then the game puts up to three sims into the same dining group and makes them dine together. A sim will only group up with another sim if both sims have 5 and higher STR and 0 and higher LTR towards each other.

There are a few problems related to this feature. When the game checks all the other sims to see if they are waiting in queue, the game only checks for regular townies and downtownies. The other townie groups added by later expansion packs are excluded. In addition, the game does not allow sims to group up with currently unselectable, playable sims. This is why you will never see two currently-unplayed, but playable sims dine together in this game.

This mod makes it so that when the game checks for other sims, the game checks all townies (social group, vacation tourist/local, garden club etc.). In addition, the game also checks for currently-unselectable, playable sims. This means anybody who has 5 and higher STR and 0 and higher LTR towards each other may group up together, making restaurants much more lively places.
Tuning: The game only puts sims into groups of 2 or 3. If you want to increase this number, then open the mod in SimPE, select the resource called NPC - Form Group, left-click on the line that says "Local 0x0000 == Literal 0x0003", and change the bottom number from 3 to any number up to 8.
Resources: NPC - Form Group/0x7FDFFE55/0x0000205D

Restaurant Food Bar Drink Fix: I came across two very annoying issues with served food at restaurants and also bar drinks. When a sim is served a meal at a restaurant, and when they order a bar drink at a bar, there is a short interval between when the sim is served and when the sim starts eating/drinking. During that short interval, other sims are able to take the food/drink for themselves, because the game considers the food/drink not in use at the time. This mod fixes this issue, and prevents other sims from interacting with these objects during that interval. If the sim is not dining any more (if you cancelled the Dine interaction), or if you cancelled the Order Drink interaction, then obviously other sims can interact with the objects.
Resources:
Function - Serve This Island Mix/0x7FDFFE55/0x00002054
Function - Serve This Table/0x7FDFFE55/0x00002020
Interaction - Eat - TEST/0x7F8834C8/0x00002008
Interaction - Eat - TEST/0x7F3C9675/0x00002003
Interaction - Have a Drink - Test/0x7F711E0D/0x00001003

Dining Tip Mod: In an unmodded game, when an unselectable sim who dines decides to tip an employee and if they can't properly route to the room where the employee is, the game simply ends the interaction and the employee doesn't get tipped. This is a problem, because most players lock the doors of their kitchens in their restaurants, which prevents customers from tipping the chef, and sometimes the waiters as well. This mod makes it so that the customer properly tips the target employee even if they can't route to the employee in question. In addition, the name of this interaction in English has an asterisk in it for some reason, so this mod removes that asterisk.
Resources:
[Pie Menu Strings]/0x54544173/0x00000080
Interaction - Person A - Sim/0x7F46B637/0x00001000
Dining - Try To Tip/0x7FDFFE55/0x00002098