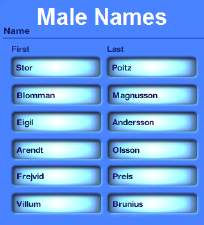 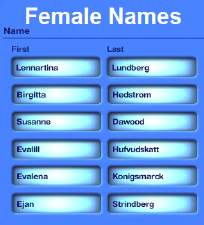 10 Thanks  Thanks     2 Favourited
Hello! First upload in quite a while, heh

* I'm using "Swedish names" to mean "names that are used in the country of Sweden." Most of them are ethnically and linguistically Swedish names, because (shockingly) Sweden has a large population of Swedes. But Sweden also has (for example) a large Finnish population, so some of the names are Finnish. Just like real life Sweden, your neighbors will mostly be Bjornssons and Johanssons and Anderssons, but there'll also be a handful of Taalonens, Lis, Garcias, etc.

* I tried to make the frequency each name is used in the game reflect the frequency that the name appears in real life Sweden -- there will be a lot of Johanssons, quite a bit fewer Lillebacks, for example. That said, I did get bored after awhile, so this isn't as accurate as it could be.

* This mod affects human Sims only, not pets.

* I made this for myself because I wanted to learn how to make name mods. I'm probably not going to edit it further unless I've made a REALLY big mistake. Feel free to send suggestions but be aware I probably won't act on them.

See: Game Help:TS3 CC Basicswiki for a full guide!
Back to download view
3 Comments / Replies (Who?)