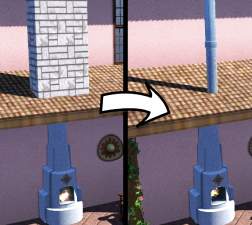 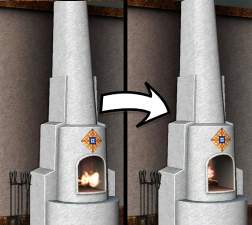 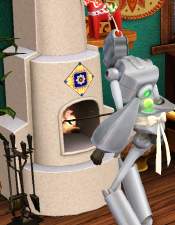 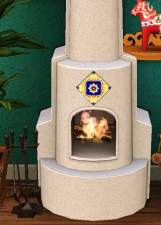 Created by Qahne
View Policy / About Me View all Downloads
Uploaded: 19th Sep 2020 at 2:41 AM
Updated: 19th Sep 2020 at 3:03 AM
The adobe-style fireplace that comes with the Haute Hacienda set is one of my favourite fireplaces in the game - however, it does have two issues. One, the flames appear too far forward, quite a ways away from the actual logs that are meant to be burning, and it kind of ruins the immersion. And two, it features a large, modern chimney - way too big and out of style for this kind of fireplace. So I fixed them.

This is a tiny 3kb file that pushes the flames back to match the logs and replaces the chimney with the metal stovepipe, which is much more versatile. To use this you need to have the decrapified version of the fireplace already installed. It won't damage your game without it, but it won't do anything at all. For best results, place in Mods/Overrides. For the chimney to change on already existing fireplaces you'll need to pick them up and plop them back down. New fireplaces will have this fix automatically.

It'll conflict with any mod that also modifies these resources, but to my knowledge no such mod exists right now.
Other Information