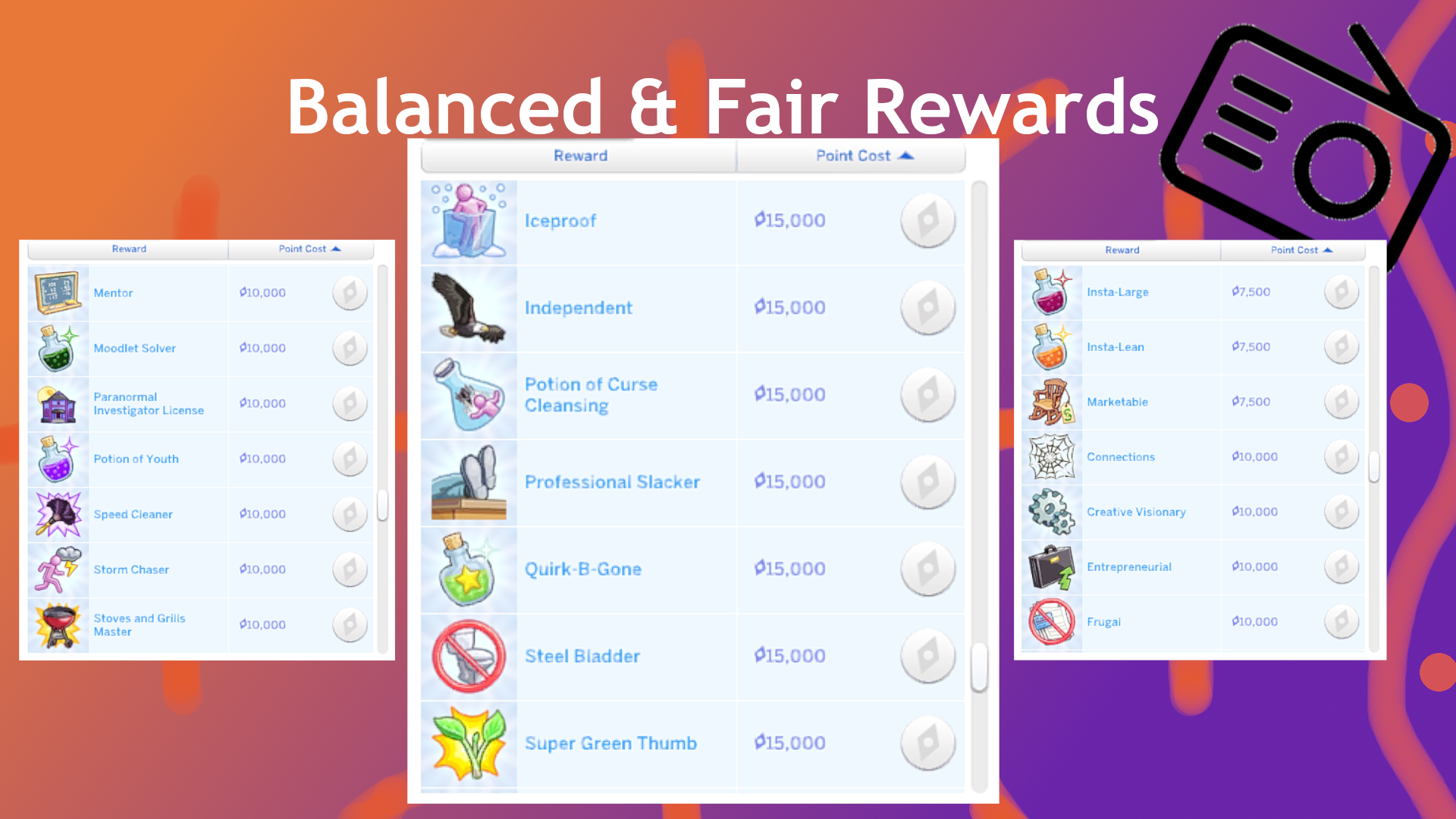 This mod is a tiny mod that changes the rewards prices in the satisfaction store to make it feel less cheaty.

Now you may be wondering, Why did I do such mod?

I always felt that the Sims 3 is much more superior to the sims 4, One reason why was because of the amount of traits and rewards, I used to like when you used to have one aspiration per person that will give you a sum of Satisfaction points once completed, and then you can spend that on stuff in the store, I loved this store, There were always extremely useful stuff in this store that will never make you turn a blind eye on them, Whilst in the Sims 4, the Rewards are awfully cheap, because you have an unlimited amount of aspiration changes you can make at any time, AND have a ton of points leftover, It isn't balanced with the cheapness of the rewards store, it makes you buy a 'high-end' trait by just doing some simple tasks, that's too easy and too dumb.

However as much as I like 'Mood solver' traits (Traits that affect emotions and the speed of the needs.), they feel too cheaty for me ; feeling hungry?, well buy this thing for 8000/10000 satisfaction points to fix that, Feeling Embarassed? This cheap thing costing 2000 points will fix that forever and then you never have to worry about it, Do you see where I am going with this? With increasing the prices of these traits with this mod the 'Mood solver' Reward Traits can become 'almost' impossible to get unless you work hard for it! Which brings me to the next paragraph:

I always felt like stuff should be balanced in this game, So when you do a simple task, you don't earn much, and when doing harder tasks, you earn a bit more and so on, I feel like in this game, you do simple tasks, and you earn a bit more then you should, and I personally don't like it, It gives away the 'personality' (nearly non-existant) and challenge (also nearly non-existant) from the sims 4, and makes you feel like you aren't accomplishing stuff that you feel you are in the prior games, I especially got mad when The sims 4 Island Living came out and the Mermaidic Kelp costed only '500' points... A plant that turns your sim into another life state; mermaid, 500 POINTS... which doesn't make sense, why would it be so cheap, it's the equivalent of someone selling you 1 Expensive piece of clothing for 1 dollar.

This is a pretty small update. I removed the dumb and cheaty potions that you can buy in the reward store, if you don't like this, then I provided a secondary OLD VERSIONS .rar.