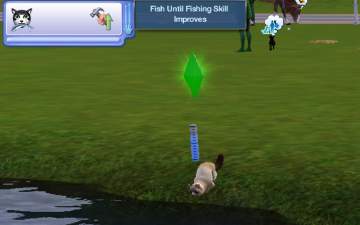 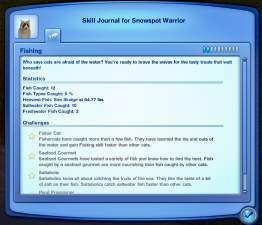 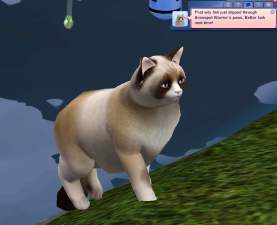 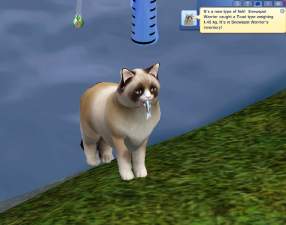 . This should fix that issue.

September 13, 2021: Version 2.7
Fixed PlayInWater so that it gains Fishing skill again.
Fixed bug where Drop Here was not being added to all prey in inventory.

July 21, 2021: Version 2.3
Fixed a problem with the STBL instance ID that could cause problems with non-English settings.
Added French, Chinese, and Russian translations.

Even though Sims 3 cats and dogs can be player-controlled active sims, I've never thought they had much depth of gameplay. They have exactly one visible skill, Hunting, which is used for every skill check from fights to, well, hunting.

This is the first mod in what I hope will be a series to give pets more to do. It is a fully-formed fishing skill separate from hunting that behaves closer to the way human fishing behaves. It includes:
In addition, I added a "Drop Here" inventory interaction for all prey that directs the cat to drop the prey where it is standing so it can eat it. By default, pets have a "Drop Somewhere" interaction that directs the cat to drop the prey someplace on the lot (extra likely locations where their humans might step on it), but they have no way to choose the location to drop except dragging directly from inventory.

One final note: pets get very little hunger gain from eating prey in the vanilla game. The devs clearly thought of it as fun rather than a way for animals to feed themselves. I highly recommend the More Filling "Minor Pets" Snacks tuning mod

Another note after that: Pet routing to bodies of water (drinking or fishing) is prone to route fails. Oceans seem to work fine, but ponds must be deep enough and have a fairly steep bank or the cat will route fail. I have no idea if this can be improved.

Use my stuff however you like! If you use it in work of your own, please give me credit for what I contributed.

If you use my stuff in your game, I'd be tickled if you sent me a screenshot.