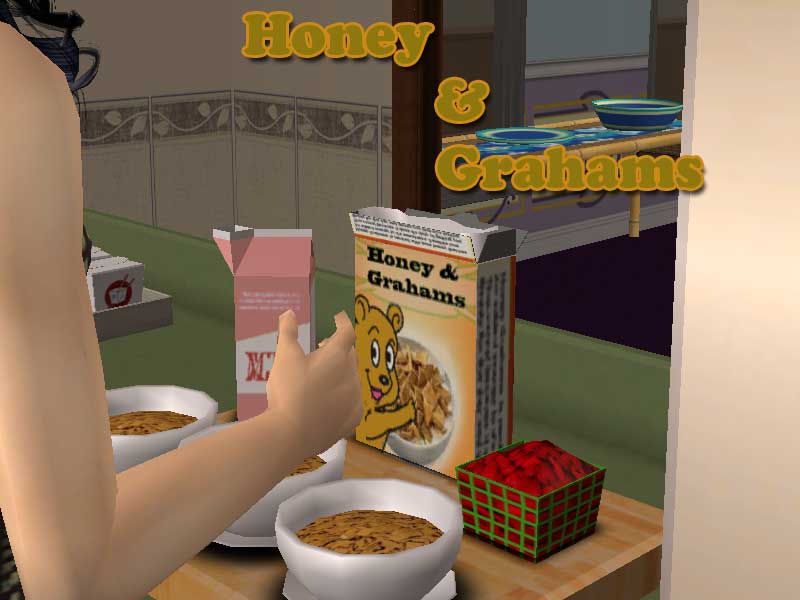 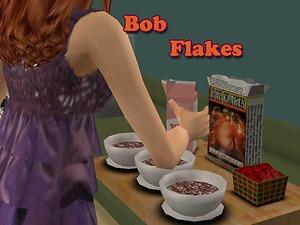 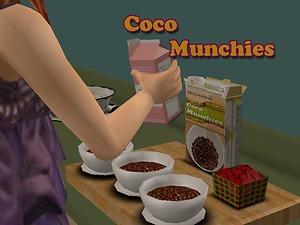 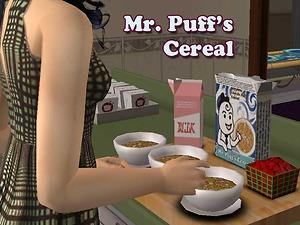 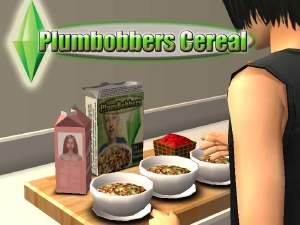 9,247 Downloads Quick download 263 Thanks  Thanks 16 Favourited 25,551 Views
Personal Picked Upload!   This is a personal favourite of the creator!

Created by AriesFlare View Policy / About Me View Downloads Home

Yesterday, I made this cereal just for fun. I took my time creating it. So far, this is one of my favorites. I named it "Plumbobbers" because it is a sims based cereal. If this cereal was real it would probably be very popular. It has marshmallow Plumbobs and the cereal is based off of "Waffle Crisp Cereal". I think this will be the last cereal I'm going to create. There are enough cereal options out there already. I recently remade the box covers because I thought they could be better. In this set, you will get 4 different types of cereal. You will get, "Honey & Grahams, Coco Munchies, Bob Flakes, and Mr. Puff's cereal." I tried to incorporate some unique names for my custom cereal. Some of these cereals are inspired by actual cereals. The images on the boxes were hand drawn by myself. The only image that wasn't drawn was the Bob Flakes box.

*Honey & Grahams-It's a cereal that is close to "Golden Grahams". This Cereal is popular to kids and people who like a sweet, crunchy breakfast in the morning. *Bob Flakes- Well, I have no idea what I was thinking when I made this. All I remember is playing Tekken 6 with my boyfriend and the idea just came to me. Bob is a character from the "Tekken" series. He's known to be a big guy. Don't let him fool you. He's very agile and challenges himself into being the first extremely overweight and successful martial artist. Bob is huge, strong, quick, and agile. Even though Bob's overweight, he's somewhat healthy. With all his special training, he can easily lose weight. I would guess that he would have to eat foods high in fat and sugar. I think that if he was to eat a "balanced breakfast" just from himself, he would eat something with tons of marshmallows and other Starchy stuff. Enough about Bob and let's get back to the Cereal. Bob Flakes is a cereal that is made of Chocolatey Oats and Jumbo Marshmallows. *Mr. Puffs Cereal- Lastly, there is "Mir. Puff's Cereal". This cereal my seem to be targeted to kids. I'm sure adults will like it as well. In appearance, it looks like Cheerios. The only difference is that the cereal has marshmallow bites in it. Mr. Puff was just a character that I created as the mascot for this cereal. I guess, he's supposed to be a cloud man. He almost reminds me of "Stay Puff" from Ghost Busters. Well, that's it. I hope you guys enjoy using these.

Requesting Status: Not Accepting Any At This Time

Hi and welcome to my profile. I've been interested in the sims for some time now. Playing the sims can be challenging, entertaining, and sometimes it can get a bit dull. The only time it can get dull for me is if I'm tired of using certain items. Back then, I didn't know that there were sites that had people who created custom content stuff. I was thrilled about uploading.


**Rules and answers about using my meshes**

My MTS page welcomes all who are interested in my works. As of now, I have quite a few food meshes that might not be the best of the best. I will admit that I do take pride in the time that I put into creating meshes. I expect for others to understand the notion of respecting a person's work. If you would like to create custom foods from my meshes, you may ask to do so. Just like any other artist, I will always want credit for my effort and time I put into my works. Creating meshes isn't always easy. I do believe in respecting the time and effort people put into their art or just work period. It will be best to show your respects by not posting my meshes on any other site except for MTS. You are permitted to change the UV mapped textures or tweak the mesh how ever you like. You can also use any of my meshes how ever you like with any possible sims games)

I do take requests:

On my behalf, I do love to take on a challenge every now and then. As for requests, It will have to be a food requests. I don't mind doing a recolor. However, my signature is providing custom foods to the sims 2. To make a request, you are welcomed to send me a personal message. The message should contain the following below.

1. Name of food
2.Culture the food originated from (If possible)
3.At least one or two pictures of the food to give an idea of what you might expect.
4.A description on how it is prepared and cooked. (You can also post a link to the recipe if possible)

Things have changed with the number of requests a person can give. After AF requests 19 is posted, each person who desires to send a request is allowed to submit only two and that's it. If you like, don't be shy to join my Sims2 food creator club.