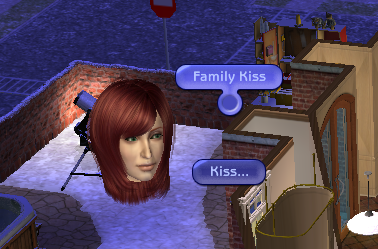 You know how when your sim gets married their parents always try to hit on the new spouse? That is because there is a bug where the new spouse considers the parents family but the parents don't consider the new spouse family. I fixed it. Also, I made in-law relationships work even if you have polygamous sims.

There are two versions:

Inlawsfixmaxis gives family relationships with all in-laws that the game originally considered in-laws, which includes not only parents, siblings, children (-in-law or step-), and aunts/uncles, but also first cousins, grandparents, and grandchildren.

Inlawsfixnew only treats in-laws who are parents, siblings, children (-in-law or step-), your aunt/uncle's spouse and your spouse's niece/nephew as family, but also works if you have installed a hack that allows your sims to be polygamous. (Otherwise, only one set of in-laws will be considered family.)

Hack compatibility: This is very uninvasive, the only hacks I would expect to conflict with it would be other hacks that also modify who is considered to an in-law or step-family, as it only modifies the global check BHAV for in-law and step-family relationship (instance 0x366). It conflicts with BoilingOil's Step-Family Romance hack, but if you have that hack you do not need this one, as Boiling Oil has included the fix in his latest version.

This hack is compatible with all game configurations.

Possibly also of interest: My extended family mod, which causes more sims to be treated as family.