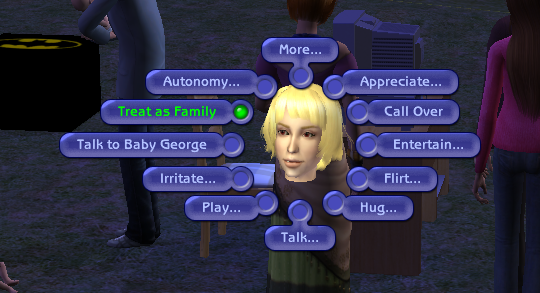 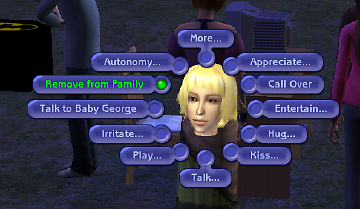 16,592 Downloads 357 Thanks  Thanks 133 Favourited 40,306 Views
Personal Picked Upload! This is a personal favourite of the creator!
Created by kestrellyn
View Policy / About Me View all Downloads
Uploaded: 14th Nov 2018 at 1:55 AM
Updated: 10th Nov 2020 at 10:56 PM
Update:
Do you have sims who are raised by more than two parents, but annoyingly the game does not consider the non-biological parents to be family? Or "siblings" who were raised together but don't technically share parents, so the game doesn't mark them as family? Or just sims who are really close and ought to be able to use Family Kiss?

If you have ACR, it partially gives you the ability to fix this, through the Add to the Friend Zone functionality, but the Friend Zone can't be applied to anyone younger than teen, doesn't give sims family interactions with each other (like Family Kiss), and doesn't affect Maxis romantic socials. This new interaction, which shows up as "Treat as Family" or "Remove from Family" depending on family status, will allow you to make the game treat any two sims as if they were family for the purposes of romantic and family socials, even if they're not otherwise related. It doesn't change family ties in any way (such as marking the selected sim as a sibling or a cousin), and isn't commutative (so, adding Sim A to your family does not also add Sim A's sister, or other sims that Sim A has marked as family, to your family). It can be used on sims of any age, including babies.

You can't use the "Remove from Family" interaction to disown sims who are considered family by blood or marriage. You can only use it to remove sims who have been added through this hack. If you add a sim through this hack, and then become family with them by blood or marriage (because someone got married, or you changed their family ties with another hack) using "Remove from Family" won't have any immediate effect until the blood/marriage family tie is removed. If you're using my extended family hack, extended family is considered family by blood and can't be removed.

There are two parts to this hack: a social plugin that makes the interactions available, and the actual global hack that causes the sims to be treated as family. You need one (and only one) version of both.

This should be compatible with all game configurations, but if you have Pets you need the Pets version of the social plugin (foundfamilysocialplugin-Pets) instead of foundfamilysocialplugin. This mainly just prevents pets from being able to add sims to their family when you use the controlpets cheat.

This might stealth-conflict (undetected by HCDU) with some hacks that add new relationship statuses, such as ACR's Friend Zone (it does not conflict with ACR's Friend Zone). If you know of a hack like that and tell me where to find it I can determine if it will conflict.

See also my extended family hack, which treats certain extended family as family without you having to do anything!
Also Thanked - Users who thanked this download also thanked:
Sim Shadow Fix (updated 2 Jan '16)
by Nopke
GunMod's Camera Mod 3.1 -- All Game Versions --
by GunMod
"Put your homework away properly!"
by MogHughson
Rugs - zMOG!! Off Grid!!
by HugeLunatic
Extended family treated as family
by kestrellyn
Watch TV from all chairs
by MogHughson
20 Sliders
by Nopke
Marriage: Last Name Chooser [FIXED 2008-10-26]
by Marhis
Business Mods
by simler90
FIXED ver: "Select your cemetery" after sims died
by arek_91
Packs Needed
None, this is Sims 2 base game compatible!
Other Information
Type:

– Social Mods : Social Interaction Mods (things that change how sims interact with each other)
– Global Mods : Mods that change the way the game works without requiring any user intervention.
Tags