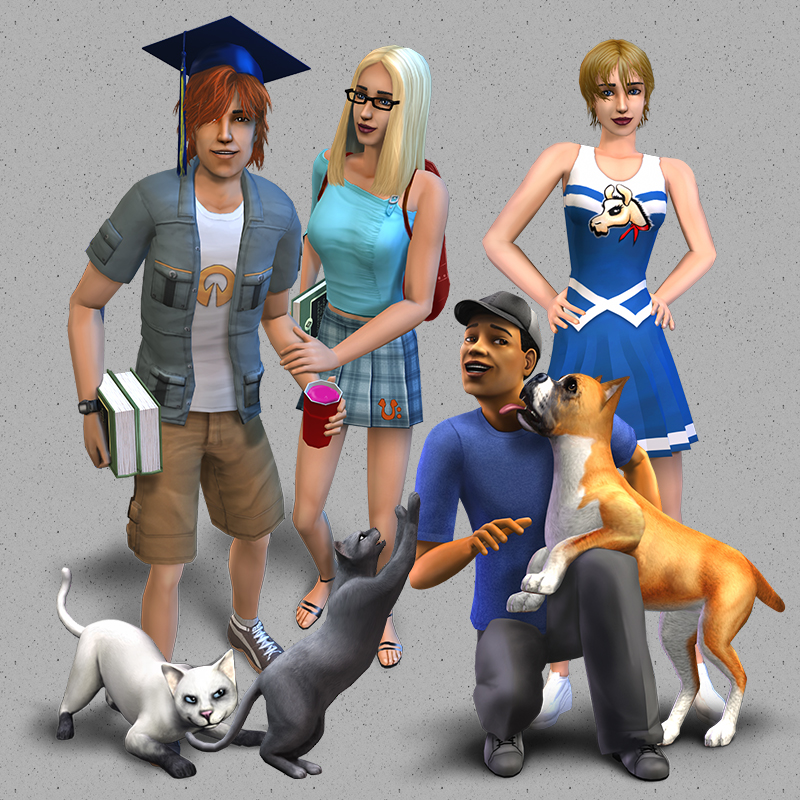 Created by Lamare View Policy / About Me View all Downloads  Tumblr

This is a set of overrides with a simple goal - to liberate young adults and college neighborhoods from restrictions on pets.

Features
This mod allows young adults and university residents to:Students living in main 'hood and non-students living on campus will be able to do all these things as well.
At the moment, teens can't take their pets with them by taxi when they're moving to college, but I plan on releasing the mod that allows that.
By the way, small pets, like birds, caged dogs and guinea pigs are allowed in college by default.

Plan of attack
Additional mods
You'd want to get additional mods that take care of aging, moving out and jobs at university. They are not absolutely necessary, but very much recommended.If you already have a similar mod (e.g. other custom aging controller), you might not need my equivalent. Test for yourself to see if that other mod works for pets at university.

The Sims 2 Pets and University.
I only tested on Ultimate Collection, but I did work on compatibility, so the mod should be good for other configs as well. No confirmation, though.

Conflicts
HCDU may show possible conflicts with the following mods, but they are resolved.
This mod may conflict with other mods that override the same resources.

That's it. If you catch a bug or have a suggestion, please post in the comments. Thank you!


Additional Credits:
EA/Maxis, SimPE, Compressorizer, Photoshop.
My thanks to LilSister and gummilutt for testing.
The picture is composed of original Sims 2 renders and some default Photoshop pattern.
Other Information

Uni aging; YA move out of college; Jobs in University; Pets on Vacation

I try to log in from time to time and check my messages and comments. So I'm kind of here (with one and a half foot).

Latest updated mods:
- YA Job Panel Revealer now shows hints in menu option
- YA-work-wants-fears-Better - fixed a recent mistake that might have prevented YAs from wanting to get a non-specific job
- Electric box: computer's interactions won't get disabled for no reason, and the power/phone outages should be less often
- Maternity set: Uni-school-bus+privateschoolbillfix and fixed non-english text strings in YA-move-out-of-college
- Job options: career-types-mutually-satisfy-wants and three updates
- Updated Uni-aging to include pets
- Sofa/Chair Bed: non-autonomous versions

Policy: for personal use and for science.
Don't include my stuff with lots, because it's all hacks and mods. Exception: sims 3 paintings.
When in doubt, ask me.