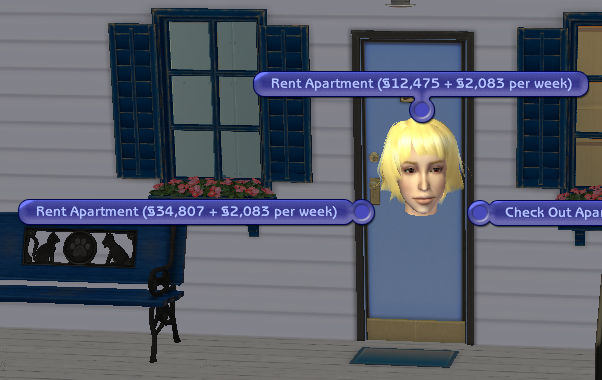 8,962 Downloads 185 Thanks  Thanks 43 Favourited 38,661 Views
There is an update available for this mod! Last downloaded: , creator last updated:

I like to play with halved wages to avoid the accumulation of huge fortunes. However, this makes it very hard to make apartment rents. So, to compensate for that, I've made this mod that halves apartment rents as well.

There is no need to move apartment-dwelling sims out of their apartments and back in again, the change to their rent should take effect immediately. If you have existing apartments in your hood, or you place pre-built apartments, the rents displayed at hood-level will not update to the halved values until you go into the base lot in build mode and make a change. After that, they should be recalculated, however, even if the apartment rent is displaying incorrectly in the hood the sims living there will still pay the halved prices.

This hack changes the BHAV that calculates apartment rent, which is 0x20A8 in group 0x7FD0DEBA. It conflicts with Inge's (Simlogical) Lot Rights system, specifically the apartment overrides, which can change the apartment rent if you set the rent on an owned apartment lot using that mod. If you play with that hack, download halvedaptrent+lotrights instead, and make sure it loads after the Lot Rights apartment overrides file. The rent can still be set in the Lot Rights mod, only the default rent will be affected. I don't know of any other mods that conflict with this.
Other Information

To avoid making apartments too cheap, you probably want to also play with the halved career wages I mentioned, which can be found here: http://modthesims.info/d/304457.