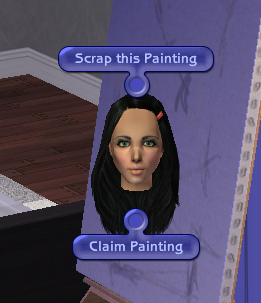 906 Downloads 87 Thanks  Thanks 18 Favourited 3,754 Views
Created by kestrellyn
View Policy / About Me View all Downloads
Uploaded: 11th Jul 2021 at 1:56 AM
Updated: 20th Nov 2021 at 7:32 PM
Updates:
Have you ever had a sim die in the middle of painting an important still life or portrait? With this hack, you can have another sim claim the painting and continue working on it. The original painter does not need to have died in order for the painting to be claimed, but the claiming sim does need to have at least as much creativity as the original painter had when they began the painting. After the painting has been claimed, either by clicking on the painting itself or the easel, options should appear for the claiming sim to continue it.

This should be compatible with all game configurations.

This might conflict with other hacks that add interactions to either the easel or sim-created paintings (either while they are being painted, or after they have been hung on the wall). These conflicts will probably not be detectable by standard hack conflict detection utilities. This hack conflicts with TwoJeffs' Paintings Stay Viewable hack. If you use that one too, download claimpainting+paintingsstayviewable instead and make sure it loads after TwoJeffs' hack. This also conflicts with iCad's mod that allows visitors to use the easel. I've included a compatible version of that mod, iCad_AutoOverride_MaxisEasel+claimpainting, which requires claimpainting and should load after it.

See the attached pictures for overridden resources.
Other Information