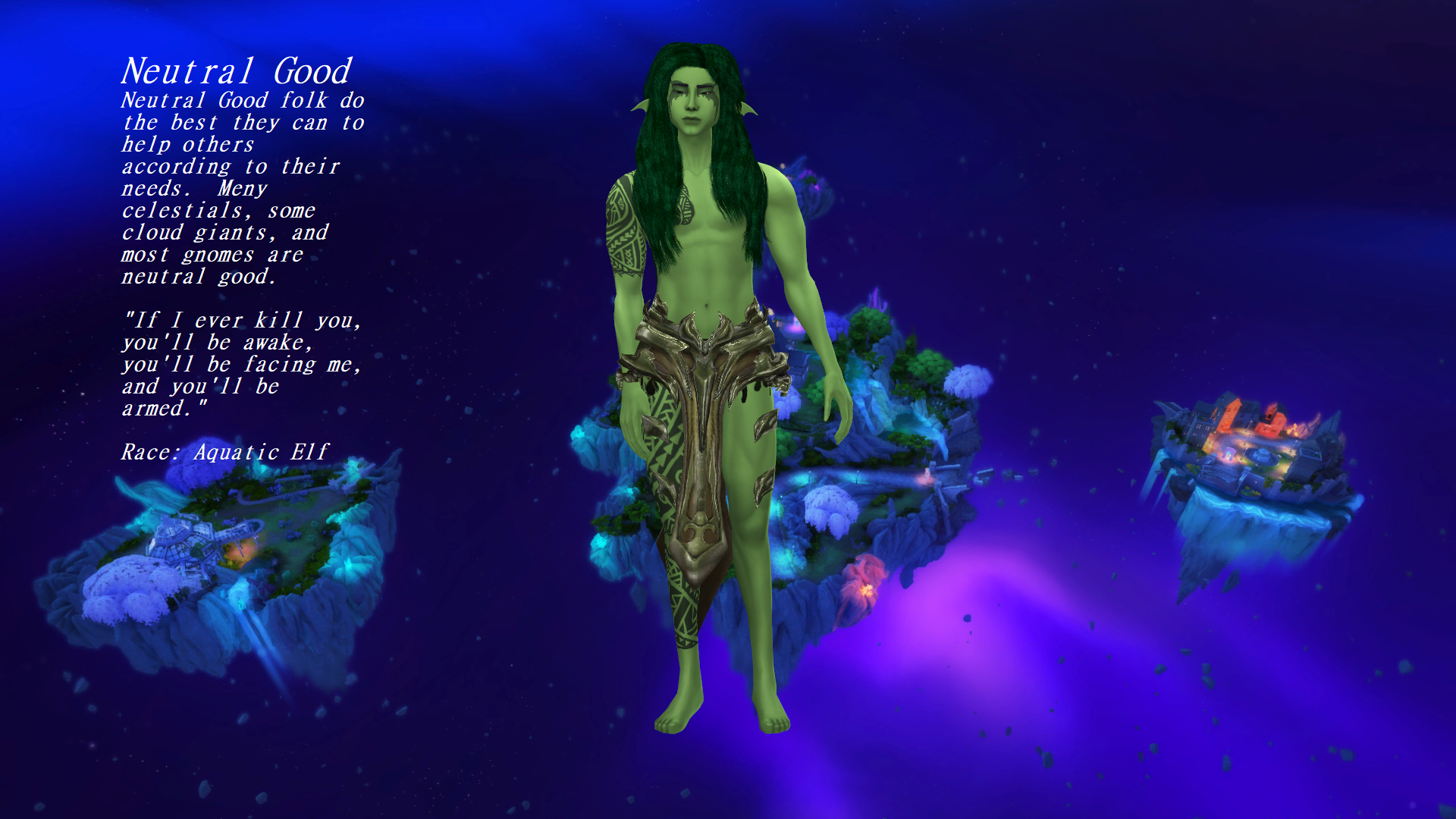 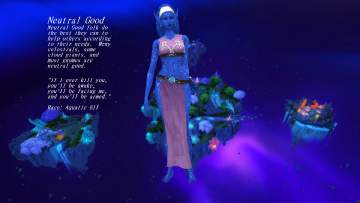 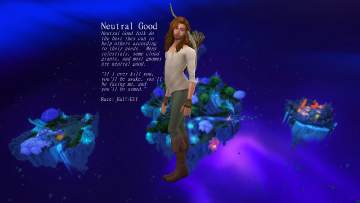 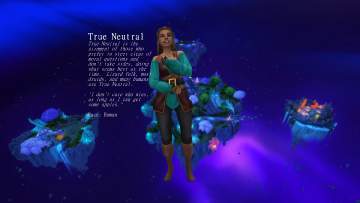 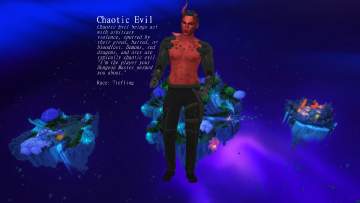 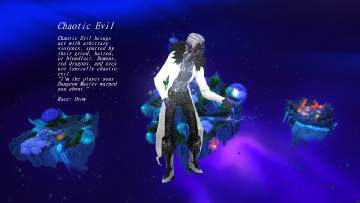 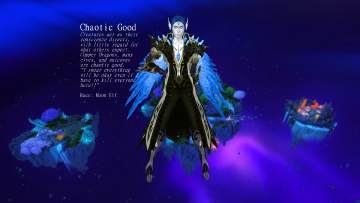 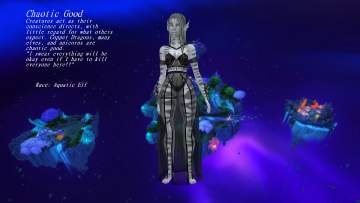 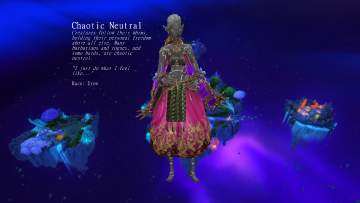 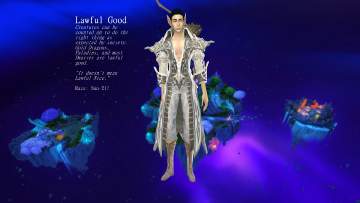 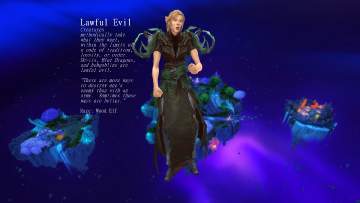 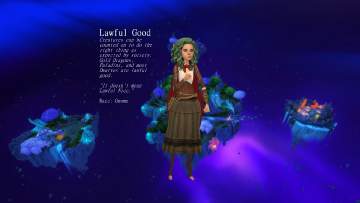 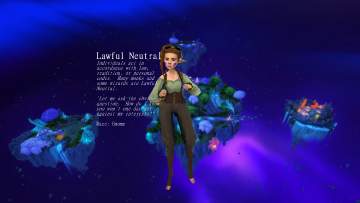 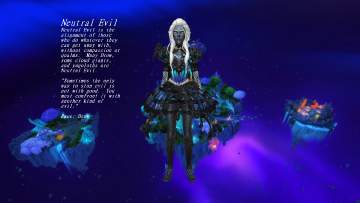 Created by Emoria View Policy / About Me View Downloads Home

You get various buffs dependent on your alignment and performing some interactions that correspond with that alignment.
Chaotic Evil
1.) Death on Contact
Being Chaotic Evil has it's perks! Like never feeling bad about Death... and killing others at will......
-greeting interaction: Kill for XP
2.) Haha!!
Chaotic evil sims are better at mischievous interactions! +3 to all mischief skills!
-Chaotic Evil sims build mischief skills 3x's faster
3.)When choosing between two evils....
I always pick the one I never tried before.
-buff achieved through doing some mischievous or evil actions
-emotional weight 1
-mood happy

Chaotic Neutral
1.)Maybe, Maybe Not...
Depends how much I got paid to do it!
-buff achieved through some michieveous actioins and actions that benefit the sim's best interests.
-emotional weight 1
-mood playful

Lawful neutral
1.)To keep order....
As long as it benefits me in some way.
-buff achieved through doing political interactions or interactions that benefit the sim's best interest
-emotional weight 1
-mood fine

Neutral Evil
1.)I am the most important thing in creation.
Do what you want, but never get caught. Conscience is for angels. Evil for evil's sake.
Vice is my own reward. The sinner enjoys their life. Evil is just a word.
Others envy my freedom and life without conscience.

Neutral Good
1.)When the system works, use it.
When it doesn't... that's what I am there for.
-buff achieved through doing good interactions
-emotional weight 1
-mood happy

True Neutral
1.)I am not altogether on anybody's side,
because nobody is altogether on my side...
-buff achieved through doing neutral interactions that benefit the sim's best interests
-emotional weight 1
-mood fine

The 9 traits are located in the Emotional category.

Unfortunately Pick and Choose is not an option as these traits do interact with one another.
Ex. Lawful sims will not like Chaotic sims.
Evil sims will not get along with Good sims.
True neutrals however do not care about the alignment of the sims surrounding them.

This appears as an angry buff with an emotional weight of 2 called Nemesis. This buff should be present when a sim knows a nearby sim is of
an opposing alignment.


Have fun and get questing

Creatures can be counted on to do the right thing as expected by society. Gold Dragons, Paladins, and most Dwarves are lawful good.

Uphold the Law
(from being Lawful Good)
for the protection of the innocent!
4 hours

Nemisis!!!
(From Lawful Good Trait)
We can never coexist!!

Neutral Good folk do the best they can to help others according to their needs. Meny celestials, some cloud giants, and most gnomes are neutral good.

When the system works, use it.
(from being Neutral Good)
When it doesn't... that's what I am there for.
4 hours

Nemisis!!!
(From Neutral Good Trait)
We can never coexist!!

Creatures act as their conscience directs, with little regard for what others expect. Copper Dragons, many elves, and unicorns are chaotic good.

"I swear everything will be okay even if I have to kill everyone here!!"

Nemisis!!!
(From Chaotic Good Trait)
We can never coexist!!

Individuals act in accordance with law, tradition, or personal codes. Many monks and some wizards are Lawful Neutral.

'Let me ask the obvious question. How do I know you won't one day act against my interests?"

To Keep Order....
(from being Lawful Neutral)
as long as it benefits me in some way.
4 hours

Nemisis!!!
(From Lawful Neutral Trait)
We can never coexist!!

True Neutral is the alinment of those who prefer to steer clear of moral questions and don't take sides, doing what seems best at the time. Lizard folk, most druids, and many humans are True Neutral.

'I don't care who wins, as long as I can get some apples."

Creatures follow their whims, holding their personal freedom above all else. Many barbarians and rogues, and some bards, are chaotic neutral.

Maybe, Maybe Not...
(from being Chaotic Neutral)
Depends how much I got paid to do it!
4 hours

Nemisis!!!
(From Chaotic Neutral Trait)
We can never coexist!!

"I'm the player your Dungeon Master warned you about."

How'd that happen?
(from being recently deceased)
I think I'm dead?
4 hours

Bonus XP
(From Chaotic Evil Trait)
Sweet I got XP from this kill!!
4 hours

Nemisis!!!
(From Chaotic Evil Trait)
We can never coexist!!

When choosing between two evils....
(from being Chaotic Evil)
I always pick the one I never tried before.
4 hours

Neutral Evil is the alignment of those who do whatever they can get away with, without compassion or qualms. Many Drow, some cloud giants, and yugoloths are Neutral Evil.

"Sometimes the only way to stop evil is not with good. You must confront it with another kind of evil."

I am the most important thing in creation.
(from being neutral Evil)
Do what you want, but never get caught. Conscience is for angels. Evil for evil's sake. Vice is my own reward. The sinner enjoys their life. Evil is just a word. Others envy my freedom and life without conscience.
4 hours

Nemisis!!!
(From Neutral Evil Trait)
We can never coexist!!

Creatures methodically take what they want, within the limits of a code of tradition, loyalty, or order. Devils, Blue Dragons, and hobgoblins are lawful evil.

"There are more ways to destroy one's enemy than with an army. Somtimes those ways are better."

Things are better....
(from being Lawful Evil)
with me ruling!!
4 hours

Nemisis!!!
(From Lawful Evil Trait)
We can never coexist!!