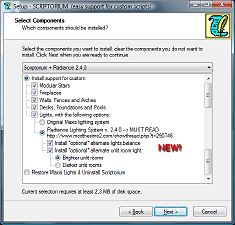 Created by Numenor
View Policy / About Me View all Downloads
Uploaded: 26th Sep 2006 at 1:40 AM
Updated: 27th Nov 2013 at 10:19 PM by Nysha
THE SCRIPTORIUM: Easy support for custom scripts
(Modular Stairs, Fireplaces, Walls, Lights)
with *optional* installation of GunMod's RADIANCE 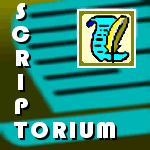 JUST LOOK AT THE

Creators of custom modular stairs, fireplaces, walls (not wallpapers, but custom walls), and lamps/mods using custom lights are tired of spending half of their time explaining the users how to edit the game files, and where to find them.
And users are (rightly) afraid to manually edit the game files, and to rummage their hard disks to find the folders where they hide.

But from now on, with the SCRIPTORIUM, all these things are just a remembrance of the past! :D

HOW TO INSTALL THE SCRIPTORIUM

The SCRIPTORIUM installer is freeware, and can be used by anyone for personal use. DO NOT REPOST OR REDISTRIBUITE ANYWHERE!
When you post your custom stairs etc (at MTS2 or any other site), post a link to this very thread at MTS2, to let your downloaders get the Scriptorium and easily install your creations.

Also, note that I've included the Radiance Lighting System in this installer just to ensure the best compatibility with the support for custom lights, but I'm not the creator of the Radiance, nor I'm involved in any way in that project.

The Radiance mod included in this installer has been created by dDefinder and is based on the original work of GunMod, Chocolate Pi and Chesspieceface; the official discussion threads for the Radiance can be found here:
- V. 2.1
- V. 2.2
- V. 2.3 / 2.4.
If you have questions/problems related to the Radiance mods, post in the mentioned threads.

FAQ 1: AFTER INSTALLING THE SCRIPTORIUM, WHAT SHOULD I DO WITH ALL THE STAIRS ETC... PREVIOUSLY INSTALLED "BY HAND"?


You have two options

FAQ 2: HOUSTON, WE HAVE A PROBLEM...! - What to do if the Installer gives error, or doesn't install the shortcuts in the Downloads, or... (any other unexpected behaviour)

FAQ 3: THE CREATOR DIDN'T PROVIDE A SEPARATE TEXT FILE TO GO WITH THE MODULAR STAIRS, WALL, FIREPLACE ETC.! - What to do to "convert" the downloaded stuff to the new Scriptorium format.


sometimes the creators forget / don't want to update their modular stairs, fireplaces etc to the Scriptorium format. In these cases, they provide a text code in the download page, suggesting to manually append it to the "modularstairs.txt" or other game file.
You MUST NOT manually change any game file. Instead, do this:When done, you can do a great favour to other users if you contact the creator and ask him to convert his stairs to the Sciptorium format

23 JAN 2009 - Scriptorium v. 2.2e: RADIANCE UPDATE.
The Radiance 2.3 (by dDefender) contained in this installer has been updated to v. 2.3 beta 2.0 (released today).
Also, fixed a bug that prevented the Scriptorium to correctly install the Radiance files for Mansion & Garden.

28 NOV 2008 - Scriptorium v. 2.2d: RADIANCE UPDATE.
The Radiance 2.3 (by dDefender) contained in this installer has been updated to v. 2.3 beta 1.9 (released today), that is compatible with Mansion and Garden. Also, included Chesspieceface in the Radiance credits.

25 NOV 2008 - Scriptorium v. 2.2c: BUGFIX. Improved the internal code so to solve the problem of the diagonal pool becoming not usable after installing custom fence-arches. Thanks again to ClicknPsycho for reporting.

23 NOV 2008 - Scriptorium v. 2.2b: BUGFIX. Fixed the path for the "Scriptorium_Decks-Foundations-Pools" shortcut (in the Downloads). Thanks to ClicknPsycho for reporting. Also, extended the credits for the Radiance mods to include Chocolate Pi and dDefender.

11 OCT 2006 - UPD to v. 1.0d (bugfix) - The last version 1.0c, released only a couple of days ago, had a bug (now fixed) that forced the installer to always install the Radiance mod.
This bugfix concernes only the users that downloaded the Scriptorium v. 1.0c] in the last two days (you can check the version of the Scriptorium from the Add/Remove window); if you are unsure, redownload anyway

09 OCT 2006 - UPD to v. 1.0c (Minor update) -Multiple languages are now available for the installer (only the installer messages: the Licence Agreement and the final notes are only Eng/Ita).
Also, the graphics shown during installation have been renewed.

26 SEPT 2006 - UPD to v. 1.0b (Bug fix) - After only few hours since the first release, I've discovered a bug: the Scriptorium didn't enable correctly the support for the fireplaces. The new version 1.0b fixes this bug.

27 SEPT 2006 - MAC USERS! - There was a typo in the previous installation instruction: the wildInclude... lines must end with a quotation mark![/B] Now the instructions have been corrected.