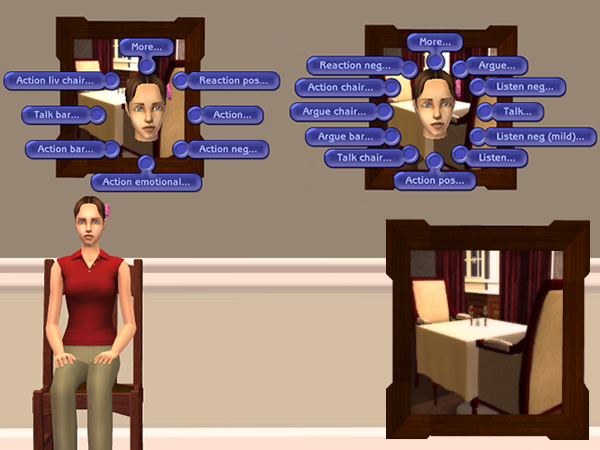 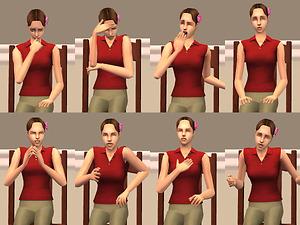 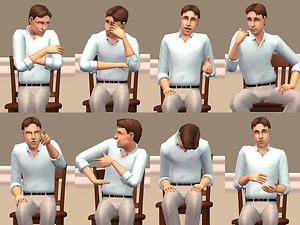 2,427 Thanks  Thanks     259 Favourited
Picked Upload! This is a picked upload! It showcases some of the best talent and creativity available on MTS and in the community.
*REDOWNLOAD - 1/8/07. Problem with menu items showing for all decorative items should be fixed (I hope). Please let me know if it isn't. Let this file overwrite the old one. Thanks for all the reports that led to the discovery of this issue.*

This hack is for the movie maker or storyteller and is a companion hack to my Talk Standing hack. This hack is a bit different than the standing hack because the talk actions vary (e.g. there are fewer of them) so it's organized a bit differently and includes more actions. The hack is under Hobbies.../Miscellaneous.

The hack menu is divided up into the following ('includes' notes are not exhaustive):

*Important Notes*
-The sim face either front, side or next to when animating and the actions are labeled appropriately. If there is no direction indicated, it means the sims face front.
-In the actions under the Talk menu, the sims will switch off facing one side and then another on the 'side' animations. If your sim is autonomously engaged in conversation when you cue the action, they will do it facing that sim.
-In the actions under the Talk chair menu, the sims will only face a certain direction on the 'side' animations depending on where the other sim is sitting. In some cases, you may have to place the sim next to someone off camera so they will face the right direction when they talk and use the 'move_objects on' cheat to move them into position (or alternatively place a sim next to your acting sim and then move them off camera).
-I included a lot of loop animations so that when you have extras in your shots, you can control what they're doing to some extent (e.g. clap loop for an audience scene).

If you're interested in seeing this hack in action (aside from the pics-female is on a chair and male is on a barstool), you can check out the latest episode of my series (AinD Ep. 6). I developed a test version to use and the majority of the scenes were filmed using this hack (some people asked about the animations when I released the episode so it's not just a shamelss plug

Enough blabbing. Please try this hack out and let me know how it works for you. Specifically, I would like to know if the hack is functional and organizationally makes sense, including the menu descriptions.