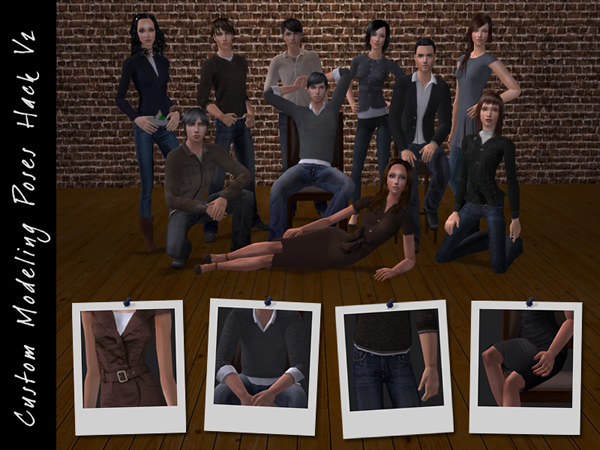 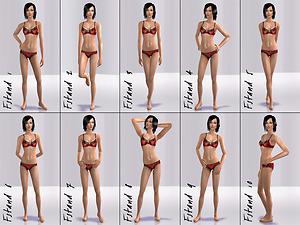 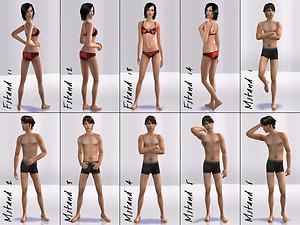 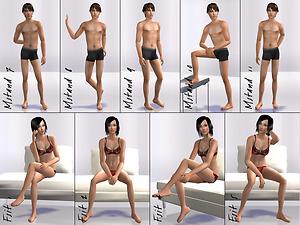 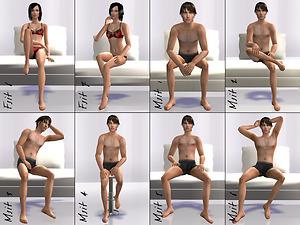 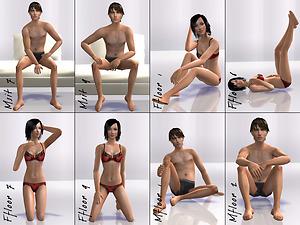 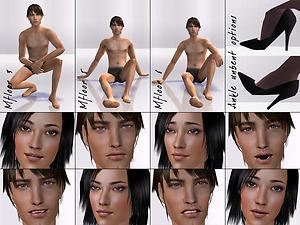 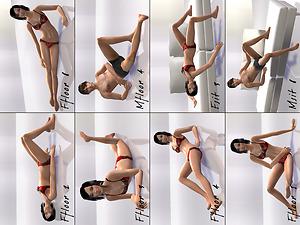 Created by decorgal21572
View Policy / About Me View all Downloads
Uploaded: 8th Feb 2008 at 11:36 AM
Updated: 25th Nov 2010 at 10:23 PM by whiterider
This is Versions 2 of my Custom Modeling Poses Overlay Hack. I decided to start a new thread for it since it's been changed so much from the original. This may be found in Hobbies/Miscellaneous and both files should be placed in your Downloads folder. It's a black box with a picture of a camera on it (same as before). Please let this overwrite the original one.

What's new, changes and fixes
-This really should be base game compatible. If it isn't, I don't know what else to do since I fixed it. Let me know if you have the base game only and it works.
-Those of you with the non-English version of the game had some menu issues. That's been fixed.
-Reworked or changed most of the female poses and added new female and male poses- 56 poses total (plus sitfloor and ankle unbent options).
-Added rotating heads for some of the poses that are hard to stage (e.g. head leaning on hand or lying down ones) so you can take them from different angles. The animated head poses have an asterick * after the name.
-Added some ankle unbent options for use with high heel meshes which can read more about below.
-Added face overlays which you can read more about below.


The hack is organized similarly as before except each pose category has one for male and for female and there's a new face overlay category:
Floor - Poses are on the floor.
Stand - Poses are of the Sim standing.
Sit - Poses are on various seating surfaces such as living and dining chairs and sofas.
Sit Floor - These are the same poses as the Sit ones except they are on the floor so they could be used for different height surfaces other than the chair or sofa. The poses will be in the ground. You have to use the magisplay and OMSP objects to basically position them wherever (like a bed, stairs, counter, etc.). Please refer to HP's tutorial on the MTS2 Wiki here for further instructions. *New: Solo created OMSP for Sims that don't require the magisplay. You may find it here.
Snap reset - If you forget which pose you played, use this to snap reset the Sim. An error message will sometimes appear so just reset. Try not to use it unless you have to!
Face overlay - I added facial expressions from the game. Since they are usually cartoony and useless, I've made them overlay so that you can pile them on top of each other. The 'Neutral' face will make any of the expressions less exaggerated. Combining different ones will give you different looks (check out the screenshots). I also added a 'Stop all' option in there in case you pile too many and forget which ones. This will not affect your pose. Don't use that unless you have to. *The 'Eyes closed (S)' option requires Seasons which is why I put the (S) there. It's from the object animation file so there's a weird noise that plays (I think it may be the robot). Anyway, if you don't have Seasons, that won't play so just ignore it.


Some important notes:
-Some of the female floor and sit poses now come with 'Start ankle unbent' options so that you can use those poses when using a very high heel mesh. Some of the ankles were not unbent if it meant the leg had to be moved to accommodate it (e.g. feet that needed to be on the floor).
-Poses work on ages teen and above for both males and females.
-I originally planned to put rotating heads on all poses but setting up a group shot was a nightmare so I only put them on certain poses where head position was difficult to manage. For the rest, I recommend Maybesomethingdunno's Fourth-Wall Options hack which allow you to command your sim to look at you.
-The poses may not work on some custom body/clothing meshes. In that case, sorry but you're out of luck.
-The screenshots of the poses are all labeled so you can save them and have a cheat sheet. Some of them aren't in order based on how they fit on the page.
-I probably won't be making a version for kids. If you're looking for posing options, my Child Animation Hack on my Designs site which will allow you to queue over 500 animations from the game.
-*New This is compatible with any future EPs. If it doesn't show up after an EP install, you need to enable your cc, sometimes several times. If you're having issues with the hack, you most likely have a hack conflict.

**READ THIS: I would be more than happy to answer any questions and assist you with this hack IF you are willing to read the description FULLY. I spent a lot of time on this hack, this description and all the screenshots. It's sort of rude to just skip over the description and then post that there's something wrong with the hack when it's a feature or ask something that's already been answered. So please do me a favor and read everything before asking questions.

Additional Credits:
Special thanks to Wes for all of his help, Marvine for his tips, and Cristina from Sims2Cri for helping me address the compatibility and language file issues. Thanks also to MTS2 and SimPE.

Please do not redistribute my work.* Feel free to include my recolors in lots uploaded to free sites likes MTS2, Insim, or your personal free site with credit and a link to www.decorgal.com. My stuff used in pictures/movies do not require credit.

*The one exception to this is if you would like to translate one of my hacks. If you do, you may distribute the translated hack only on a non-English speaking forum (no general sims/downloads sites). Please give credit to me and a link back to decorgal.com.

Sorry but I do not take unsolicited requests.

Please do not email me about Sims 3. I don't have it.