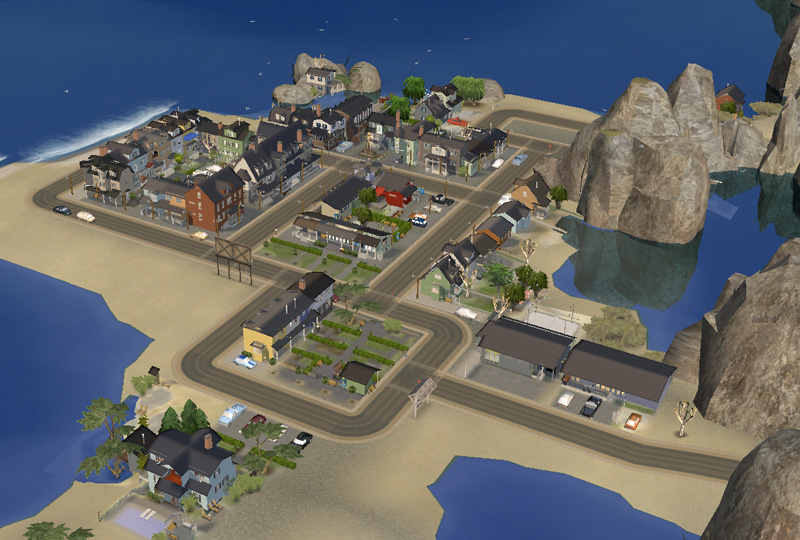 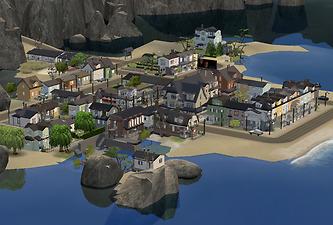 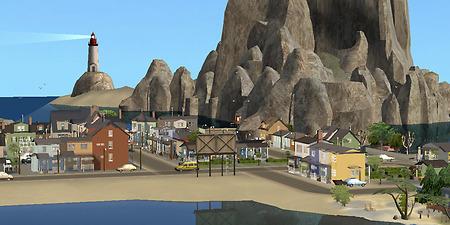 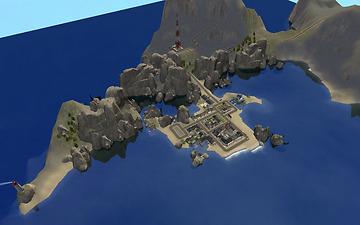 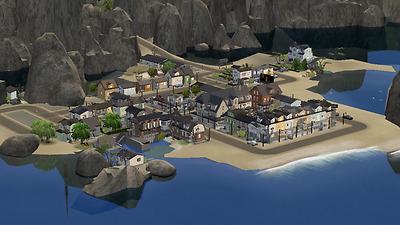 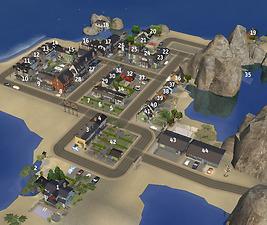 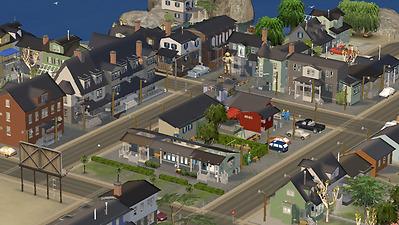 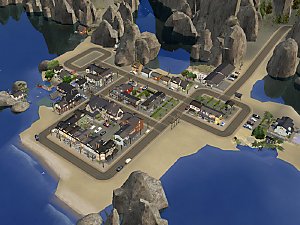 3,196 Thanks  Thanks     563 Favourited
This is a featured upload! It showcases the best talent and creativity available on MTS and in the community. A small town on a sandy peninsula, surrounded by enormeous rock formations. This is supposed to be somewhere far up North (or down South) where the climate is fierce and nothing much grows – the neighbourhood has almost no trees; most houses have some kind of sheltered outdoor space, almost all of them have fireplaces.

There are 44 lots all in all, 16 community and 28 residential ones. Some of the residential lots are built for multiple households, as hotel or motel, or as a residential school or retirement home. All of the lots are very small, mostly between 1x1 and 2x2 – the only larger ones are the harbour, the retirement home, the bowling lane, the cemetary and one of the public beaches (those are 2x3 or 2x4). The peninsula itself is quite stuffed with lots, but there are some roads on the mainland (up the hills) as a small space reserve. Elsewhere has a small town center with shops, a hotel, and a harbour; next to that are the Museum for Marine Biology and the Institute for Deep-Sea Science. There is also a school on the block where the hotel is, along with several "better" family homes facing the open sea. On the North side (the right side of the picture above) are some small starter homes; across the harbour is a little island with another small starter on it.

Many of the lots are partly submerged in neighbourhood water and have a swimmable and/or fishable ocean. Two of them have no road; the island has water on all sides. All of them are shrunk, moved, sloped, expanded, made into corner lots, or otherwise messed about with in order to get this into the shape it has now. This would not have been possible without the LotAdjuster – special thanks to Mootilda for writing it, and to everyone involved in its development.

Please read post #46 of this thread (Technical notes) if you plan to modify this neighbourhood. 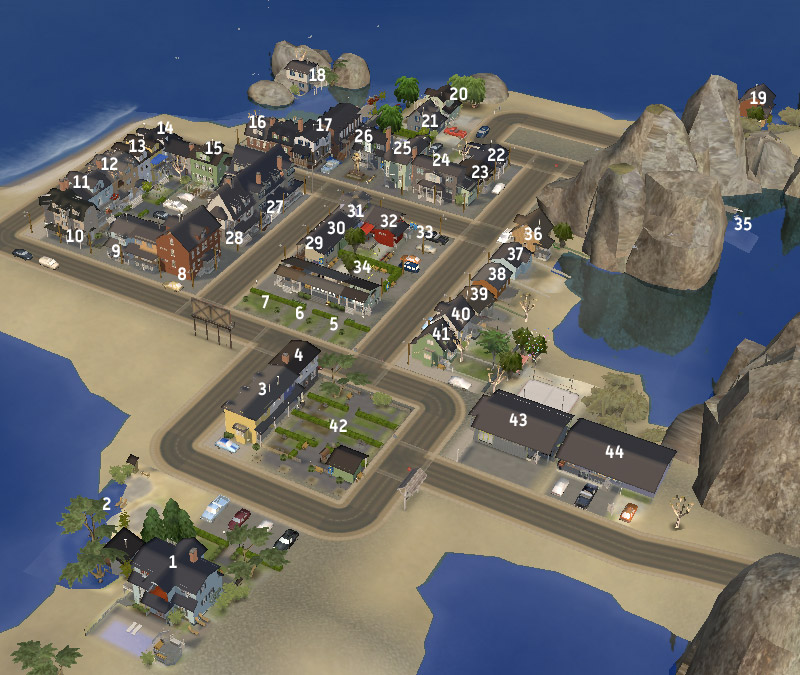 See the comments below for pictures and descriptions of each lot – the numbers in the map above correspond to the numbers in the post titles. Lot sizes given below do not include the road(s), they follow the standard EAxian scheme.

All of the lots are playtested in NL+OfB+Seasons with no hacks. Most of the community lot businesses are tested as visitable lots only, not as owned businesses. All lots are tested for adequate lighting at night. The entire neighbourhood has been in closed beta for 3 weeks, on 9 different machines, both OS X and Windows, in Seasons and in BV or later (up to M+G). Many thanks to all testers for your help!

All of the lots have custom thumbnails, except the two roadless ones. Those have no thumbnails at all, because there would be no point in putting them in the lot bin anyway (and also because otherwise my upload would have been 13kb too large).

This requires Nightlife, OfB, and Seasons in order to look like on the pics. It is technically possible to open it in Seasons only, but then you will have to rebuild/redecorate a lot – everything from NL and OfB (windows, doors, half walls) will be missing. I believe BV users can put a few beach lots in here; AL users should be able to convert the multi-household lots into apartments but I don't know how well they will work. See my Backdoor Lane 10 post for info on multi-household lots – it's two years old but most of it is still relevant for non-AL users.

While testing this, we found a very odd combination of circumstances under which lots will crash on load for some OS X users (a perpendicular wall on one of the edges, a particular direction, and a particular length). One lot in N515 met these criteria; I've rebuilt it so that it has a different direction now, this seems to have worked. Still, if you encounter a crash on load with any of the lots in here, please post.

(I was one of the users who crashed consistently, I did more than 100 tests myself, and I'm not crashing now, so I'm reasonably sure we've done the right thing to circumvent the issue. But since most of the lots in here are built in a way the game was never designed to handle, it's always possible that your game will behave differently from the ones we tested with.)


Seasons users – if you plan to upgrade to Bon Voyage or later, please read:

Lots with underwater borders are difficult to port from Seasons to BV or later: BV won't display neighbourhood water on a lot that has been saved in Seasons and not moved afterwards. This is so because, simply put, saving a (partly) underwater lot breaks the neighbourhood terrain in a way that's not visible in Seasons (but important for BV). Moving fixes it. See post #46 for all the gory details.

All of the lots in Elsewhere will work in BV the way they are now. Only when you save them in Seasons, they will look broken when ported to BV, unless you move them afterwards. Some of the submerged lots in N515 can’t be moved, so they will remain broken.

You can do two things to get around this:

- Don’t give the game a chance to break things: if you want to upgrade in the near future, simply don’t touch any submerged lots until then and they will still be fine in BV.
- Fix the damage after it’s been done: if you want to upgrade later, keep a backup of the original neighbourhood you download from here; once you upgrade to BV, you can restore the neighbourhood terrain from that (see post #47 – it’s not very complicated) so that the damage that Seasons has done will be fixed.

BV users (or later) don’t have this issue, it’s only upgrading from Seasons to BV that poses this problem. Thanks again to the betatesters for finding this!

No. But see post #47 -- you can easily copy the terrain (and the rocks and trees as well, if you like) to any other neighbourhood. This amounts to the same thing, with the additional advantage of not having to redecorate.

See the installation instructions tab – it's three simple steps. Elsewhere will install as N515. Contains no playable sims, townies, NPCs, or other traces of sim life. All townies and NPCs will be generated at random when the game sees a need for it; if you have notownieregen installed, you should probably take it out for a while (unless of course you prefer to make your own townies).

Floors/Walls:
- One dark wood floor by HolySimoly, from this page
- One floor and one wallpaper by myself

- When playing this neighbourhood, it would be good to have the CEP (which includes the fix) or some other fix for the double-wide “Open Me” window installed – I’ve used that in many of the lots, and without a fix no light will come through. To my knowledge, EA still haven’t repaired this.
- I have taken all screenshots with this neighbourhood water mod (by niol) installed. It gives the neighbourhood water a less surreal colour, which is nice for a neigbourhood with so much water in it. This does not seem to work with all games – if you have disappearing/funny/invisible water, please take it out and check whether the problem persists before posting here.
- I used this neighbourhood deco placement mod by saramkirk for the deco – it allows for neighbourhood decorations to be placed in or near lots and roads. Very useful and highly recommended.
- I don't have Uni, but I imagine for Uni users this default replacement (crammyboy @ MATY) would be very appropriate in any marine environment. (Replaces the mesh for the pillowfight pillows, so that sims are slapping each other with dead fish instead.)

- When you move the camera far up, some of the beach lots will probably look flooded in neighbourhood view. You can see that effect on some of my screenshots. I think the exact amount of the "flooding" depends on the graphics card (and perhaps game version, too), in any case there's nothing to worry about: the lots only *look* flooded but the water level doesn't actually change.

- A similar thing happens in lot view, on submerged lots: the water level can change when you go in tabbed view and when you move the camera up and down. This is normal.

- In Lot #21 (3 Hammerhead Bay), the mailbox isn't accessible from the front (I think it's either the hibiscus or the column blocking it), which apparently confuses the mailman/-woman. I'm not going to fix this, since I don't have TS2 anymore, so please move either the shrub or the mailbox out of the way. Thanks for the heads-up, Dougner!

- If you don't see water on your lots or run into any other issues, please take out all custom content except what's in the "elsewhere_customcontent" folder and check whether the problem persists. This should always be the first step when you encounter problems with the game. Do not post here before you haven't done this -- I'm not responsible for other people's broken/incompatible stuff. This FAQ may help you to sort out your CC issues.

- AL users: on the roadless lots (Cod Island, Hammerhead Cliff), you should NOT use the "walk to school/work" options. Sims that walk to work or school are returned by vehicle, but vehicles have no access to these lots, which means your Sims will never come home. You can safely use the "Walk to [community lot]" option though. Thanks mangaroo for reporting this! =) (see post #307)

- All of the authors of the custom content and game mods listed above, in particular amythestfenix and HugeLunatic who made stuff-on-demand prompted by my WCIF posts =)
- frillen and Gretle for their collections of in-game objects (from here, here and here)
- Inge for the Portal Revealer and for answering my questions
- Everyone involved in the development of the LotAdjuster, HoodReplace, SimPE and all other tools I used
- Numenor, Mootilda and Emma for helping me to figure out how to set up an empty, EAxis-free environment under OS X
- Mootilda, HugeLunatic x 3, aelflaed, ladykatsim, luws and rhiamom for almost three weeks of testing, debugging, and helping me to figure things out


Please note that this upload has two parts: the neighbourhood folder, and the custom content. You need both parts in order for everything to work as designed.