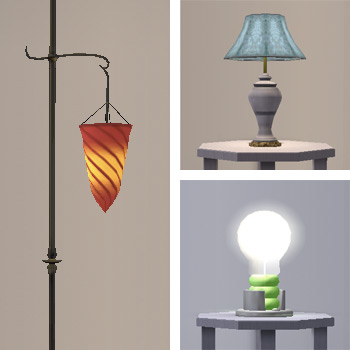 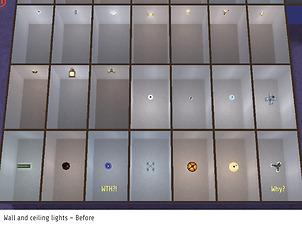 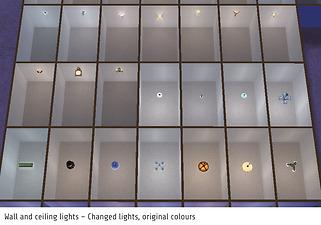 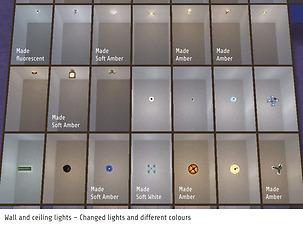 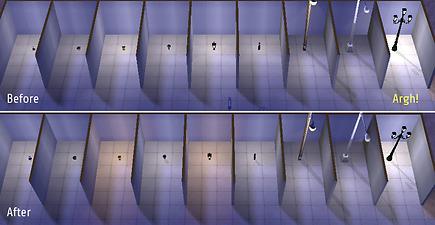 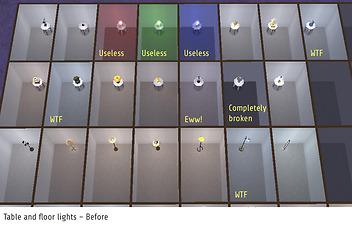 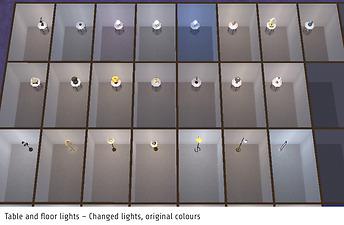 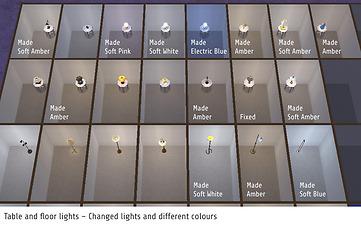 1. a tweaked lightObjects.txt that changes which predefined lights are assigned to which lamps;
2. a tweaked colors.txt that also changes some of the light colours.

The two files are not dependent on each other, you can use either or both.

See screenshots below for a complete before/after overview. Most obvious changes are:

– Some lamps look like they’d be rather soft/warm (and some even say so in their catalogue description), yet Maxis decided to give them "Soft Blue" light or something similarly WTF. I’ve changed those to Amber or Soft Amber.
– The three lightbulb-shaped lamps were basically useless for any non-disco environment – I’ve assigned softer colours to them;
– Fixed the blindingly bright light cast by one of the outdoor lamps;
– Fixed the "Founding Fathers" lamp that was completely broken (Maxis simply forgot to assign a light to it, duh). In colours.txt I also made SoftAmber less pink and Amber more yellowish and more intense – they’re pretty much indistinguishable originally. I slightly tweaked the Fluorescent light as well, made SoftWhite a touch warmer, and Fire a bit more yellow (since that works better for the candle-type lights in the higher EPs).

Both of these files go in (Base Game) TSData > Res > Lights > objects. Make a backup of the original before you overwrite.

I suppose that there may be lighting mods out there that also modify these files, so you’d have to see which one you like better. I'm told that the Radiance mod, and other similar ones, will simply ignore this one – you won't see any effect, but nothing bad will happen either. Thanks Numenor for letting me know! =)

This will affect all lights anywhere in the game. You need to exit and restart in order to see the effect.

This is extremely easy to tweak: just open the lightObjects file in a text editor and reassign the lights you want. I’ve commented most of it so that you can see which light is which; the other names should be self-explaining. The syntax is very simple:

means 1. make the light for the green "lightbulb" table lamp as defined in "Three" (a preset defined near the top of the file – I didn't mess with any of those), and 2. give it the colour "SoftWhite".

The names of the presets relate to the brightness of the lights – "Two" is very weak (I don't think I've seen that used that anywhere), "Ten" is very strong (used only for outdoor lights). The colours are defined in colours.txt as RGB on a 0–1 range (not 0–255).

I do not take requests. Even if I did, I only have up to Seasons. If you want anything else changed, please DIY.

– Fixed : Fixed Maxis Mistakes
– Global Mods : Mods that change the way the game works without requiring any user intervention.
Back to top