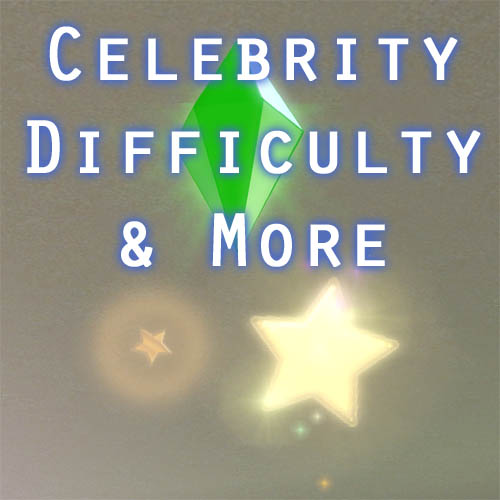 This is a a mod designed to change the difficulty for sims to become celebrities.

As the same XML file controls the "disgraceful actions" that are applied to celebrities, this mod also has changes for those actions.

Please read the text below carefully regarding the different flavours, and choose the flavour that best suits your play style.

Download one flavour and ONLY one flavour! These files are NOT mix and match - you can only have ONE! You will need to choose which flavour suits you for celebrity threshhold as well as falsely accused chance.

This mod will not affect sims that are not currently being played - only your currently played sims in your active family will be affected by this mod. If there is story progression that is involved in sims changing celeb status without being played, I think that's controlled by some other data. But if you'd like to be able to chat with a celeb without suddenly becoming one yourself too, this will help.

You may have noticed this thread missing temporarily. After some more extensive testing and feedback, I've changed the initial celeb level threshhold a bit. This should prevent the widespread celebrity-ism from spreading across your playable sims like a virus.

Nothing was really "wrong" with the previous version besides it not working as well as it needed to to prevent the initial celeb level.

I've also kind of overhauled the thresholds, as the real problem with celebs is becoming one in the first place too easily. Therefore, there are now fewer flavours, but they're better and more logically tuned to increase the difficulty.

All flavours increase the initial difficulty to become a celebrity, based on the point value for specific actions (becoming friends is 1000, good friends is 500, fiancee is 2000, and so on - these values I haven't changed). This should keep your playable sims from becoming celebs unless you really intend them to be.

There are certain actions, that, if your sim is caught doing them, are considered "disgraceful" and get your sim a bad moodlet and bad reactions from other sims. By default, the possible disgraceful actions are:

Many have expressed dismay at some of these actions being considered "disgraceful." Especially considering it's not just tabloid reports, but, "No, I know what you did, someone like YOU isn't getting in here!" type stuff from bouncers.

With the games having focused on a rather accepting view of "alternative lifestyles," certain items on the list seem very odd. Therefore, the following "disgraceful actions" have had their "chance" parameter set to 0. This -should- disable these actions as being disgraceful.

Additionally, there are flavours of this mod which adjust the chance of being falsely accused - you can either choose the default chance, or lowered chances (it seems to happen really frequently!).

False accusation flavours (and their tuned values) are:

So, for example, if you find a mod that increases the chance of celebs getting freebies, it WILL conflict with this mod because it would change the same XML, even though I left those values the default.

It's super easy to modify the values to suit your own tastes! Just open any one of my files in S3PE, select the single XML file inside, and click Edit. Notepad will open with the file, and you can change the values as you want. Save, close Notepad, reload the file in S3PE, and save. Tada - custom modded XML!

Additional Credits:
Thanks to Delphy, Inge, Peter, and your mom.

See: Game Help:TS3 CC Basicswiki for a full guide!
Back to download view
214 Comments / Replies (Who?)